The conversation of privacy seems to be dominating the news, with "democracy disrupted" headlines explaining the increase in civilian surveillance and The New York Times maintaining an entire "Privacy Project" section.

But what about having privacy from the very people you know and trust? Can you maintain a sense of seclusion and the feeling that your lifestyle and belongings are safe with your housemate? What about your live-in partner? Or even your parents? How much of a private life is even possible with a housemate of any kind?

We asked 512 Britons and 510 Americans to explain what privacy really looks like for them today. We compared the two nationalities, as well as each living situation, to define everything from the top privacy invasions housemates experience to the worst things parents have accidentally walked in on. Continue reading to see everything else these participants revealed.

First, we asked respondents in all living conditions which rules of the house were most commonly followed. Reading another person's mail was forbidden (and, not to mention, a serious crime) in 48.5% of households. Housemates were the most likely to honour this rule, but parents demonstrated a larger tendency to open an adult child's mail, or at least not have a rule against it. In other words, privacy in personal mail does not extend as far within family.

Another legally dicey infraction of privacy – taking someone's picture without permission – was rarely considered to be an important household rule. Less than a quarter of most respondents had a rule about photographing, filming, or posting about one another without permission, though 25.4% of women said posting something to social media without permission was a commonly followed house rule.

Borrowing without asking was a more common no-no for respondents, as 44.5% had a rule against this in the house. This time, parents were the most likely to follow this rule: 50% had a no-borrowing rule in the house. Depending on the family situation, this rule may have been written to better protect the belongings of the parents or the children. 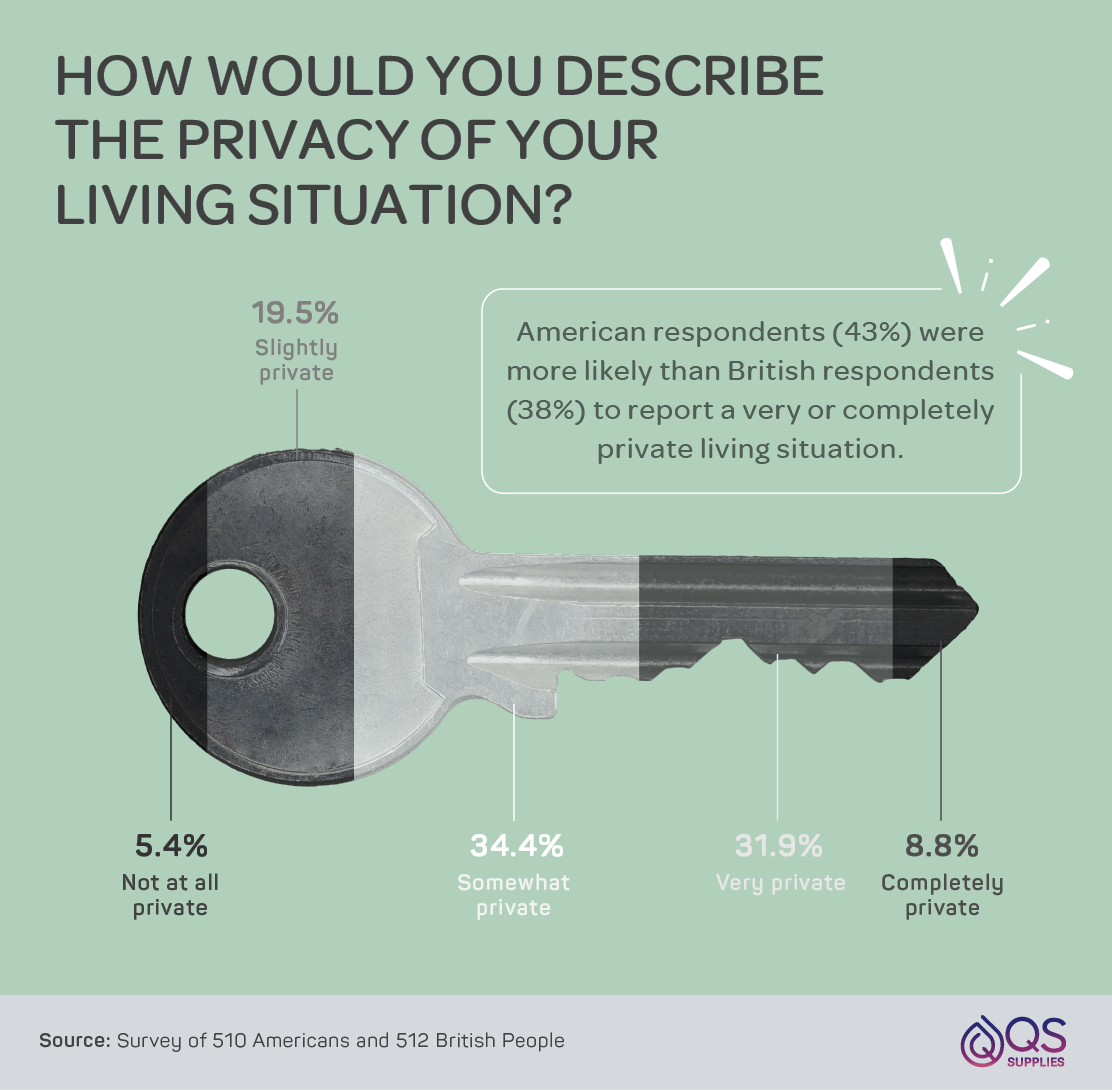 In spite of the many rules respondents shared with us, only 8.8% felt that they had complete privacy. Roughly 32% said they had "a lot of privacy," and 34.4% said they had at least some. There was also a national divide, as American respondents reported a better sense of privacy in their homes than Britons. These numbers may be improving as we speak, however. In these countries and others around the world, the phenomena of living alone is increasing in likelihood.

What They're Walking in on

The risk of embarrassment becomes higher without privacy, so we made sure to ask housemates, and even parents and their adult children, what they had accidentally witnessed while living together. Most often, people walked in on their housemates fast asleep. Though not embarrassing, this can be disturbing, simply because of the importance of good sleep. That said, living alone might not be a good solution here, as loneliness and fatigue have been shown to directly impact one another.

Perhaps more awkward would be walking in on someone urinating or having a bowel movement, which 30.7% and 19.1% of respondents had done, respectively. Women were more likely to walk in on both of these things than men, but parents took the cake and walked in on their housemates defecating 25.5% of the time. With such a lack of pooping privacy reported, parents were likely walking in on both their partners and their adult children. 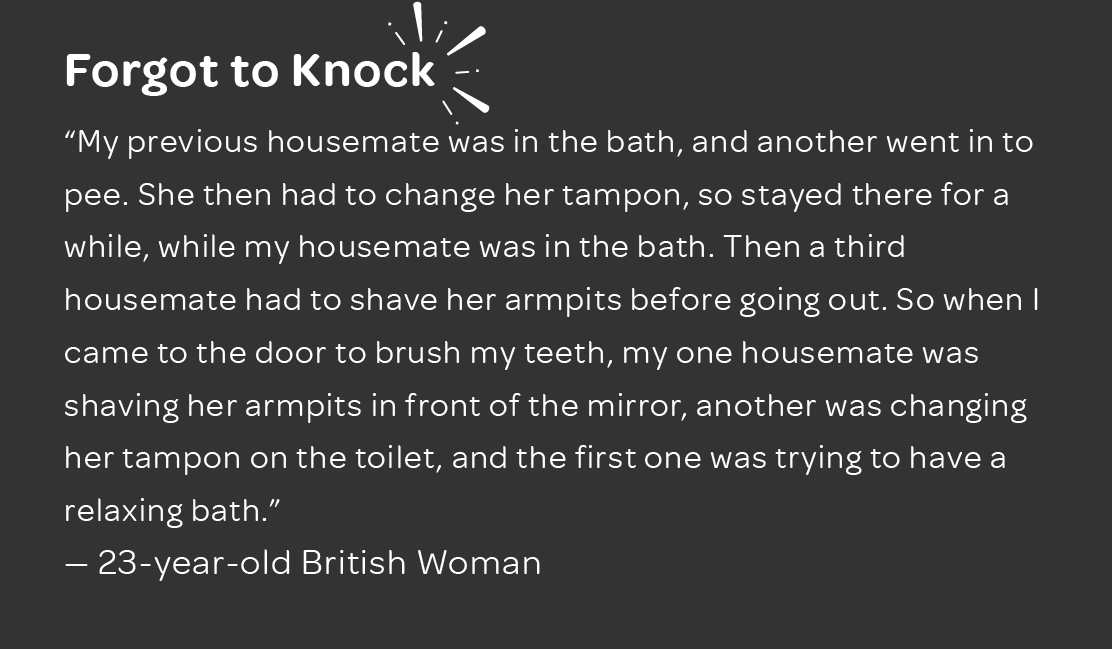 Housemate Hears a Who ... 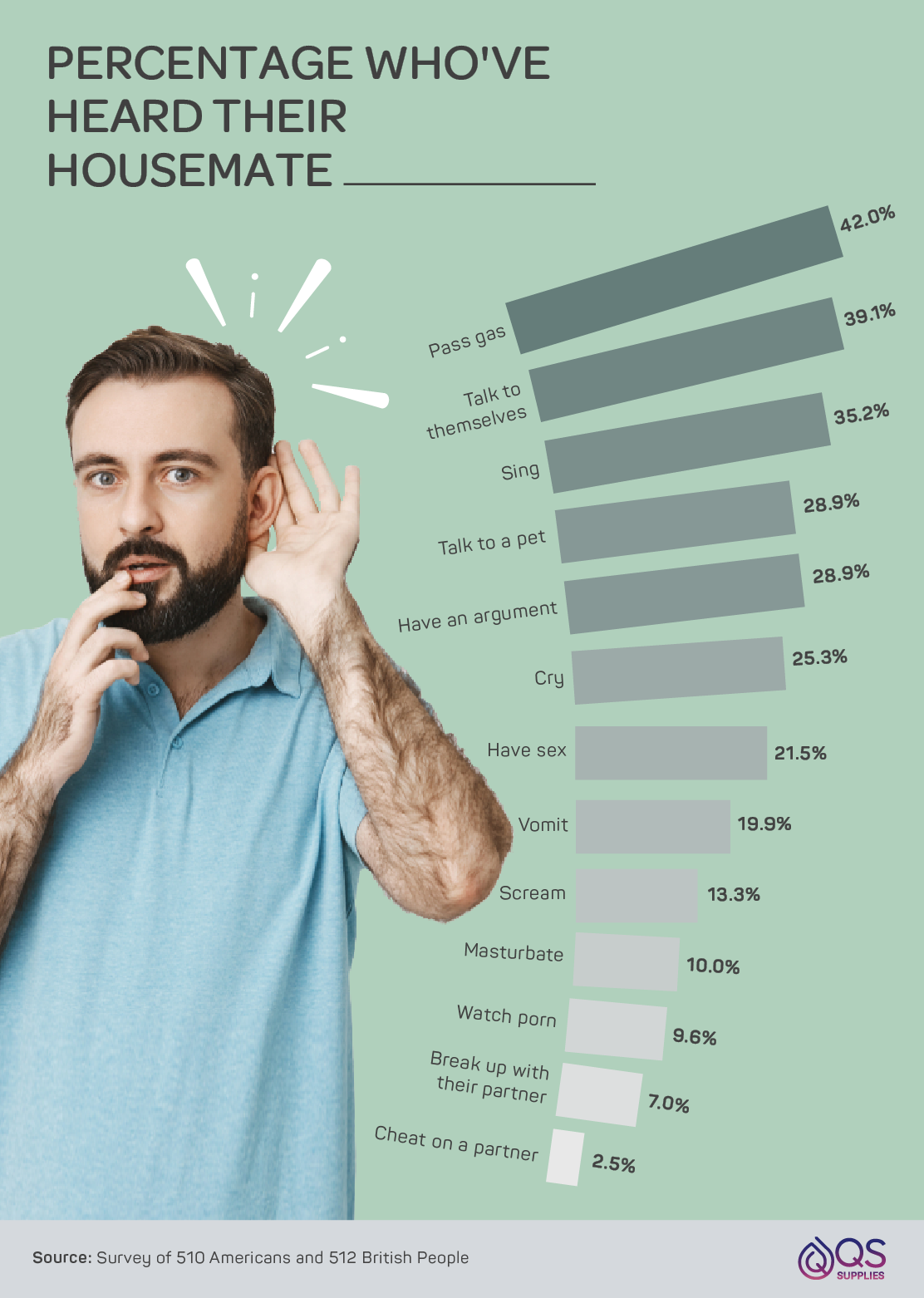 Even without physically walking in on someone, housemates frequently overheard things they probably weren't supposed to. Forty-two percent overheard flatulence, and 39.1% heard their housemates talking to themselves. Things only got more intimate from there.

Nearly 22% of people with housemates heard them having sex, and an unfortunate 21% of adult children living with their parents were able to say the same. Adult children living with their parents were a little more careful when doing the deed and were only walked in on by 11% of parents. Just remember that all of this can be avoided with the simple use of a knock.

Well over half –62% –had used their housemate's tech devices without their permission, whether they had a password or not. Respondents in the U.K. were even more likely to do so, most often reaching specifically for cellphones. Again, this behaviour falls into some legal grey areas, so respect your housemate's tech privacy whenever possible. 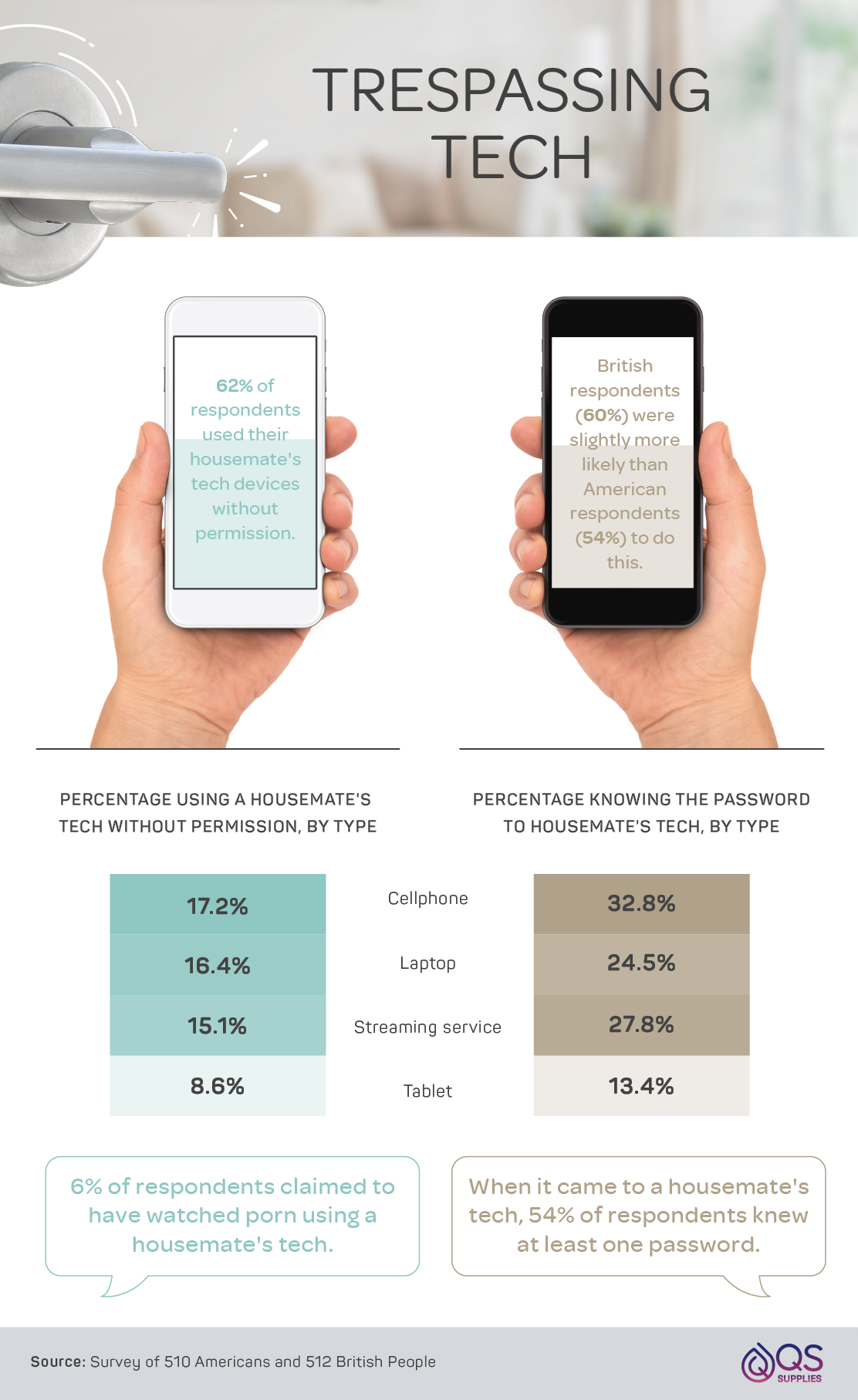 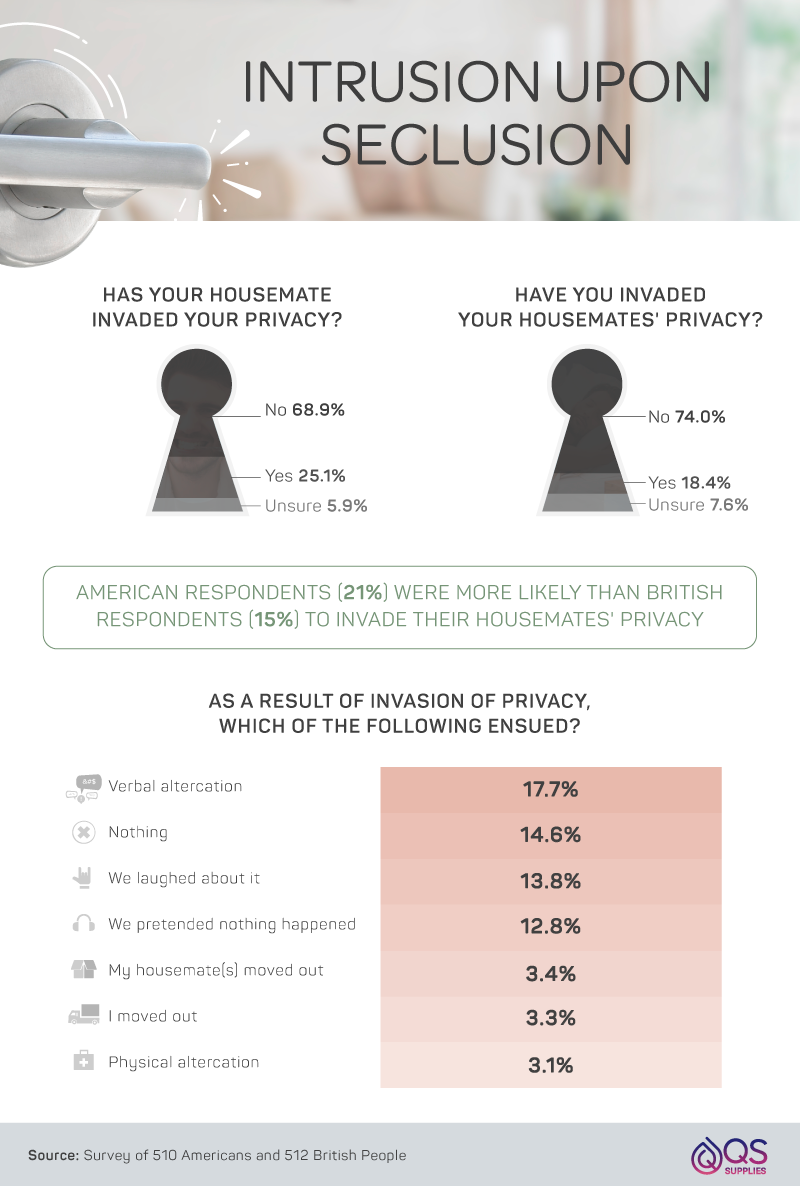 Even after these invasions of privacy occurred in the home, the repercussions weren't so terrible. Nearly 15% said absolutely nothing happened afterward, and 13.8% were even able to laugh about it. Very rarely (less than 4% of the time) were people actually moving out of the house. Evidently, privacy invasions are not only common but fairly tolerable in modern living situations. 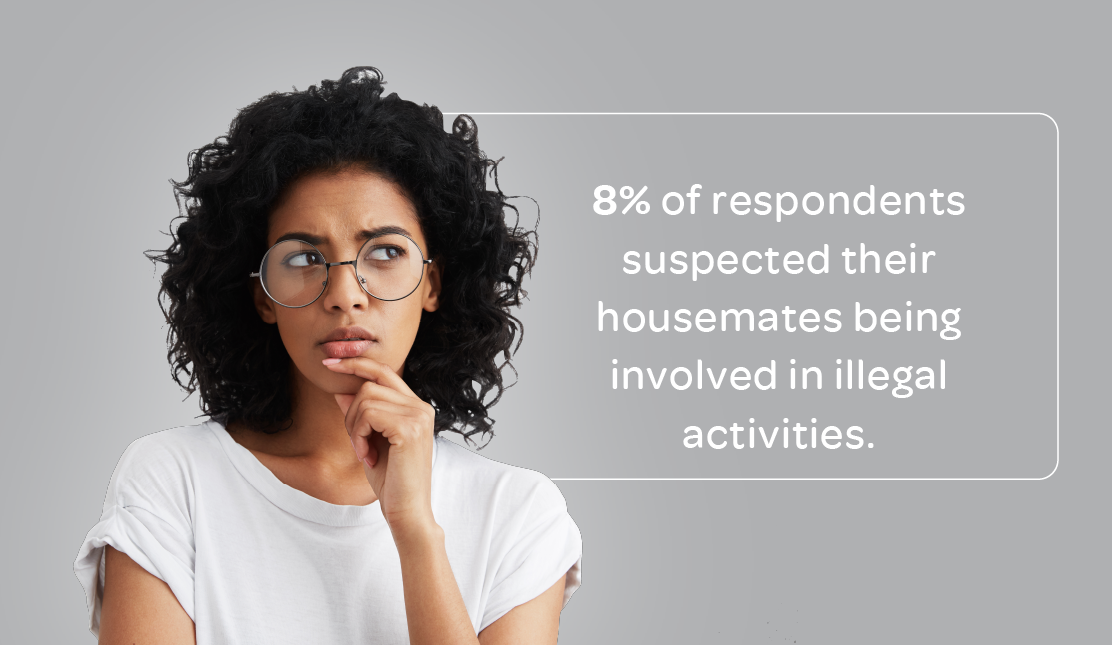 Things felt less tolerable, however, for the 8% of respondents who suspected their housemates of being involved in something illegal. And if these suspicions ever turned out to be true, more than a third said they would definitely report their housemates to the local authorities. 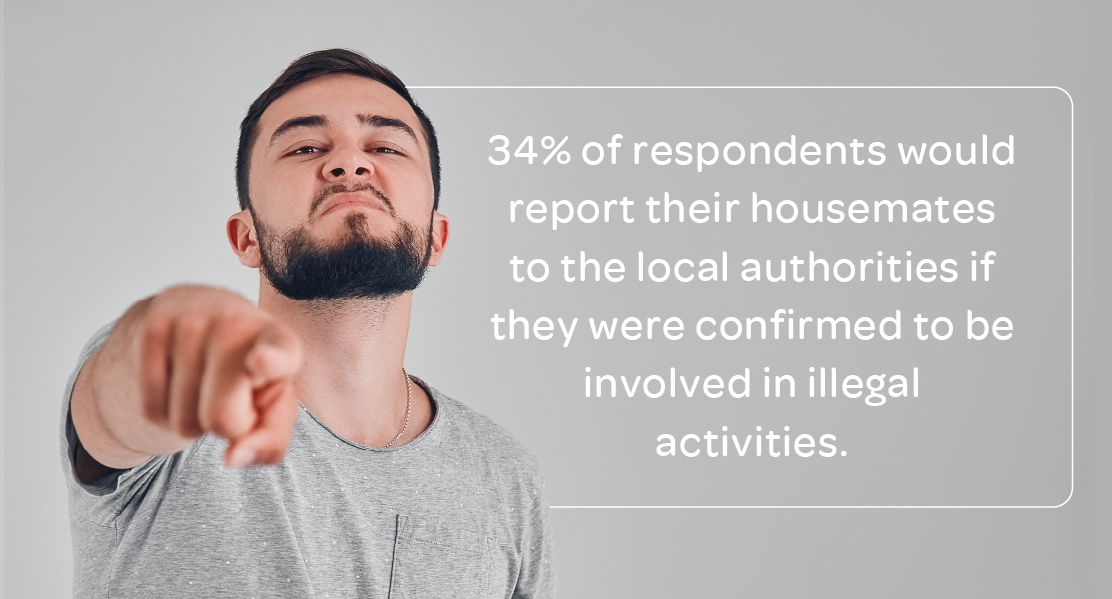 As data showed, it was pretty common for both accidental and purposeful invasions of privacy in any shared housing situation. Whether it's using the restroom, having sex, or scrolling through a cellphone, very little remains sacred when you live with a housemate.

Nevertheless, your home is your haven, and it should be a place you love to return to when the day is done. Though you may be unable to control your privacy entirely, you can control the warmth and comfort of your surroundings. At QS Supplies, we can help to create the kitchen, bathroom with designer shower enclosures, basins, taps, and furnishings of your dream home. With such beautiful and functional surroundings, your housemate situation will only get easier.

We collected 1,022 responses by administering online surveys to 512 British people via ClickWorker and 510 Americans through Amazon Mechanical Turk. Of the 1,012 people we polled, 55% were female, 44% were male, and 1% identified as neither male nor female. Respondents ranged in age from 18 to 74, with an average age of 36 and a standard deviation of 12. An attention-check question was used to ensure all respondents read questions and answers in their entirety. Certain labels were rephrased for clarity and/or brevity. All survey responses were self-reported, which can come with issues like attribution, exaggeration, and telescoping.

Know a housemate who has been crossing the line? Share this article with whomever you may need to, but be sure it's for noncommercial purposes and you link back to this page when doing so.