QS Supplies
Study & Research Articles
Bath vs Shower: Which Does the World Prefer?

Bath vs Shower: Which Does the World Prefer? 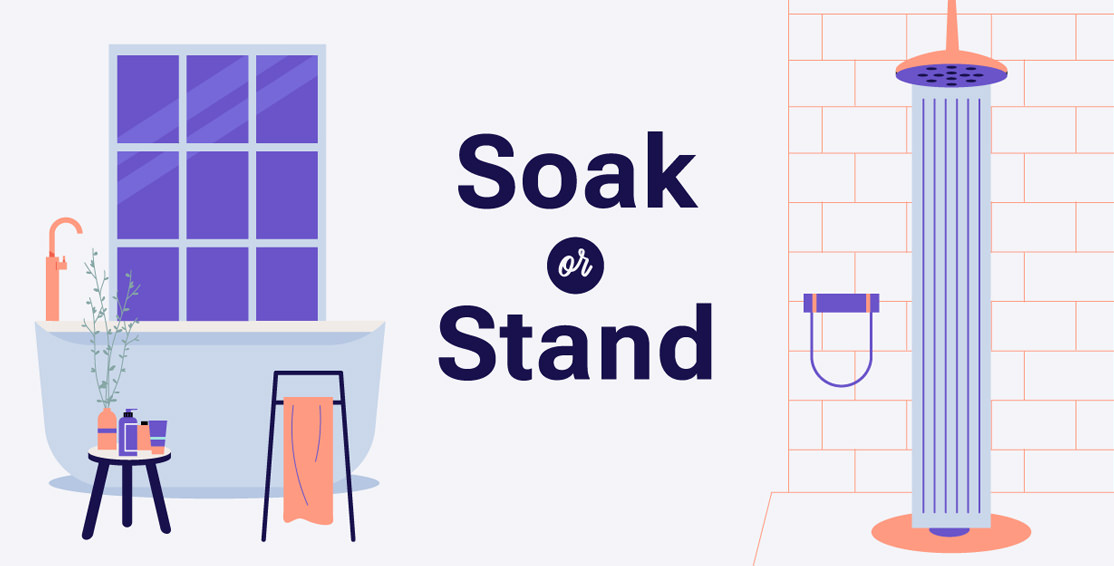 It's the world's biggest water fight: the debate over whether the bath or the shower is best.

And if you're thinking about switching your bath for a shower unit or vice versa - to boost your property value or as part of a general bathroom upgrade - there is a lot to think about.

There's thinking itself: more suited to the passive soak in the bath, while a shower lends itself to singing or reciting prepared speeches (the true purpose of the shower handsets/microphone).

How about price per wash? As the cost of living crisis continues, the maths show that “the average bath costs less than a 10-minute power shower.” However, here the difference is negligible. Those who prefer to shower can easily adjust their habits to bring their water and energy costs into line with what they'd spend sitting down.

And quality of wash? In ancient times the bath was as much a place for social congress as for personal hygiene. Today, even if you bathe alone, you won't get as clean as you would with a good shower. On the other hand, the tub is a more reliable site for stress and pain reduction.

Perhaps this last note explains the results of QS Supplies' latest study, in which we found that the world overwhelmingly prefers baths to showers. The shower is closer to a chore, a daily necessity, while a soak in the tub is a relaxing treat. Still, preferences differ from city to city, state to state. Read on to find which places prefer which washes!

QS Supplies analysed thousands of geotagged, bathroom-themed tweets using the SentiStrength sentiment analysis tool. We identified which tweets were overall more positive or negative towards the bath, and did the same for the shower. Then we added up our findings and declared the places with more overall positivity towards baths to be pro-bath provinces, and those who tweeted more positively about the shower to be pro-shower.

Bath versus shower is the political issue where 'blue' and 'red' tend to be closely aligned - on the cold and hot taps, at least. Still, if the mixer tap allows for a centrist (warm) position, it doesn't resolve the issue of bath vs shower for the U.S. public. That's what Twitter is for. And Americans have voted with their tweets, overwhelmingly in favour of the bath. Only six states prefer the shower. 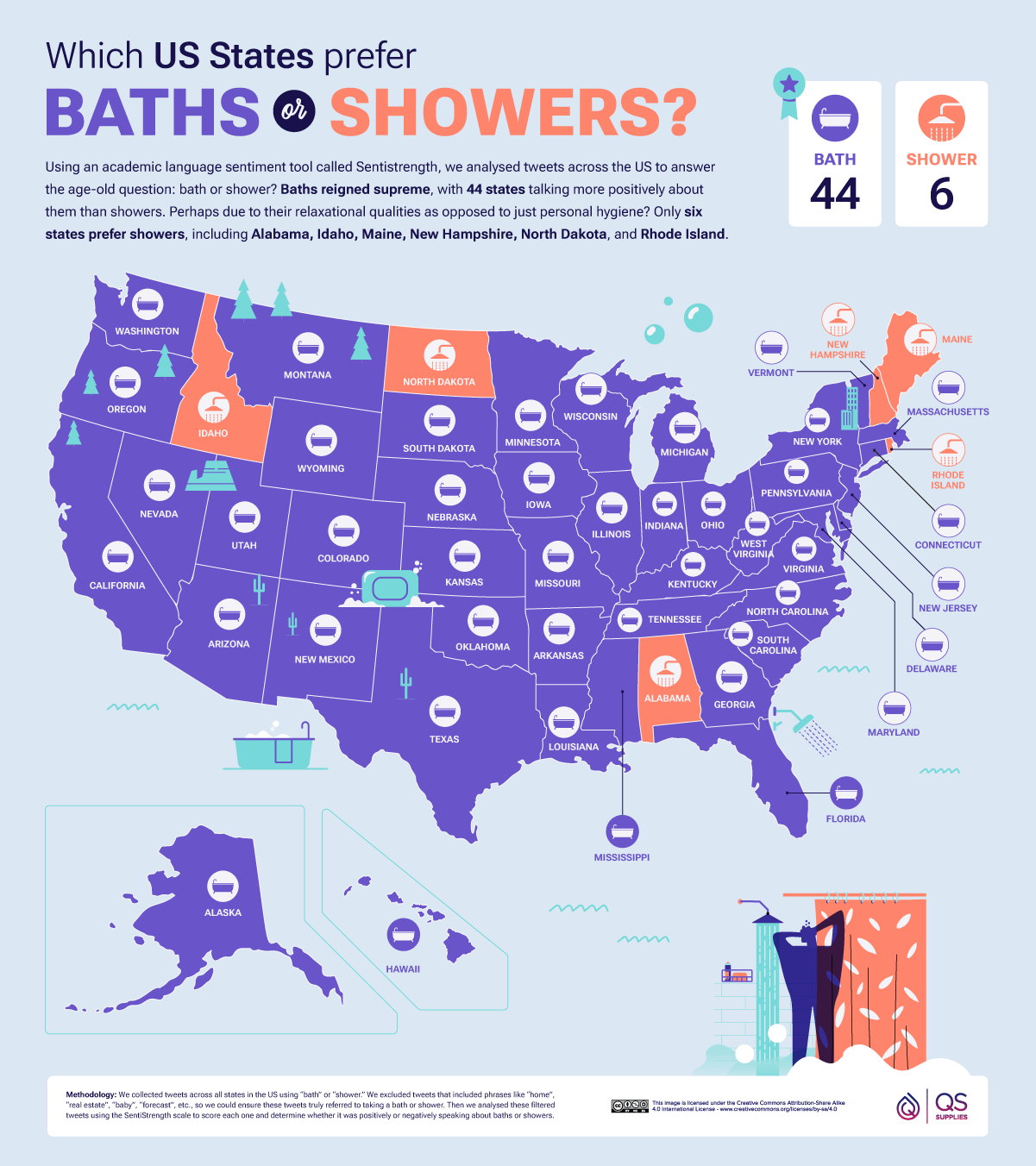 And then there are those who prefer to do neither. Take Yale lecturer James Hamblin, who very publicly quit washing and calculated he'll save up to two years of his life for doing other stuff. “I think that many people — not everyone — could do less, if they wanted to,” says Hamblin. “We are told by marketing, and by some traditions passed down, that it's necessary to do more than it actually is. Your body is not so disgusting that you need to upend your microbial ecosystem every day.”

The bathtub was actually quite a late fixture in the American home. Aside from technical and economic obstacles, experts warned that loitering in a tub of water invited all kinds of health risks. Improvements in sanitation and germ theory gradually made the bath a more hygienic proposition. And, since the first installations were in the homes of the wealthy, the tub soon became a status symbol for the aspirational classes. It is now the most popular 'proper wash' format in 81 out of America's 100 biggest cities. Again, rarity value may be at play. While U.S. Twitter users are overwhelmingly more positive towards the bath, two-thirds of Americans shower every day. The bathtub truly retains its status as a luxury amenity, even if that's due to more time restraints than economic ones.

“However pleasant a long-continued bath may be in hot weather, yet it is by no means to be recommended,” warned British engineer J.H. Walsh in 1857. Children in particular should be careful not to “dabble too long in the water and thus do absolute injury to themselves by carrying to excess what is otherwise a most valuable adjunct to health.” 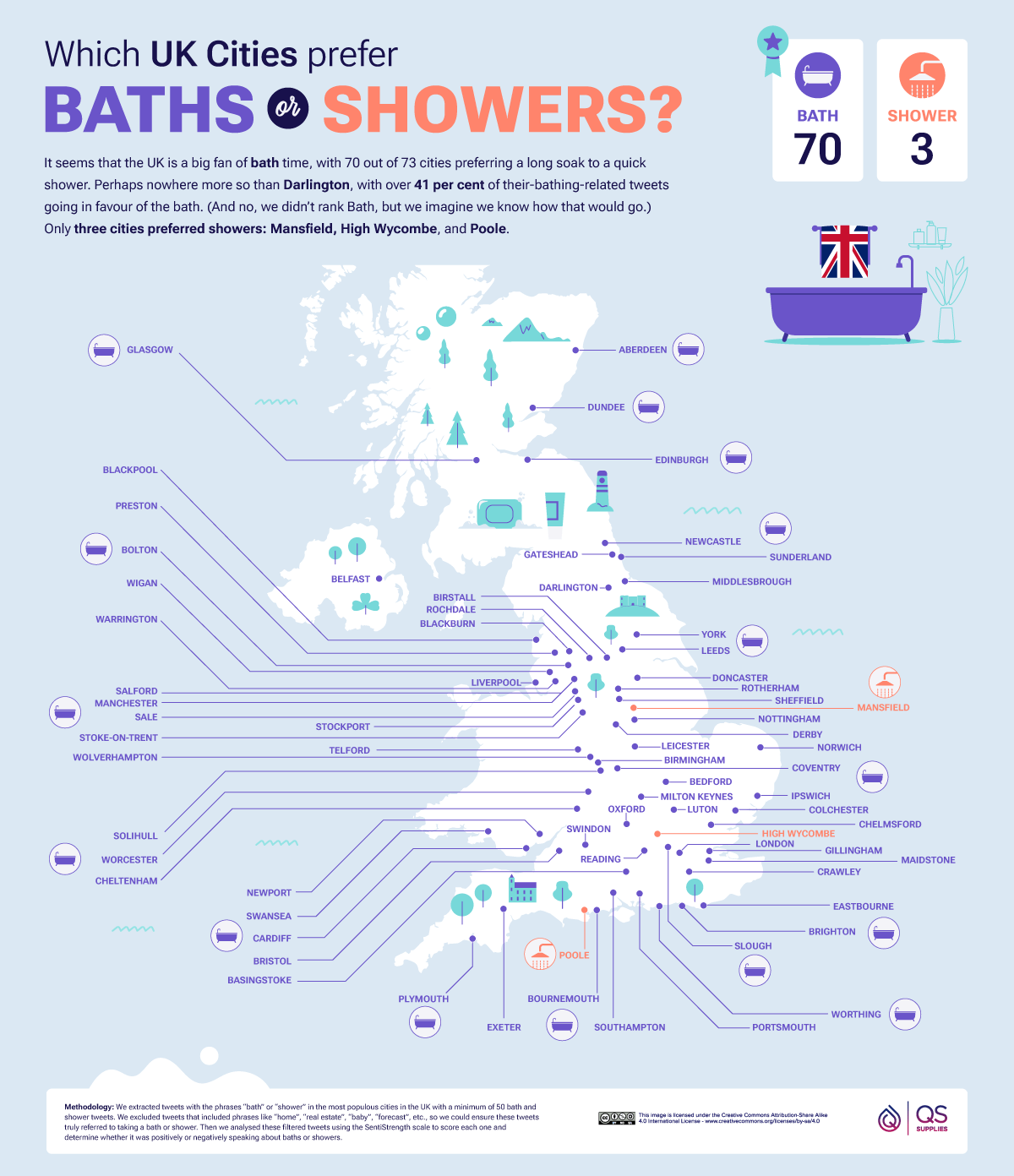 Some 165 years later, majorities in High Wycombe, Mansfield, and Poole are the only ones to heed Walsh's words by valuing the shower. Norwich is firmly in the bath camp, although the city's most famous fictional son prefers to combine both: “I'd often fill the bath, get in, then put the shower on too,” recalls Alan Partridge in his 'memoirs.' “It was like swimming in the sea during a tropical downpour. I called it my 'Caribbean soak'. Bliss.”

Showering is Australia's “National Obsession” – But Most Prefer the Bath

In Australia, the hot shower has “become a national obsession in very recent times,” according to historian Professor Janet McCalman. “If you went back before World War II, there were a lot of people in Melbourne who didn't have a shower at all.” 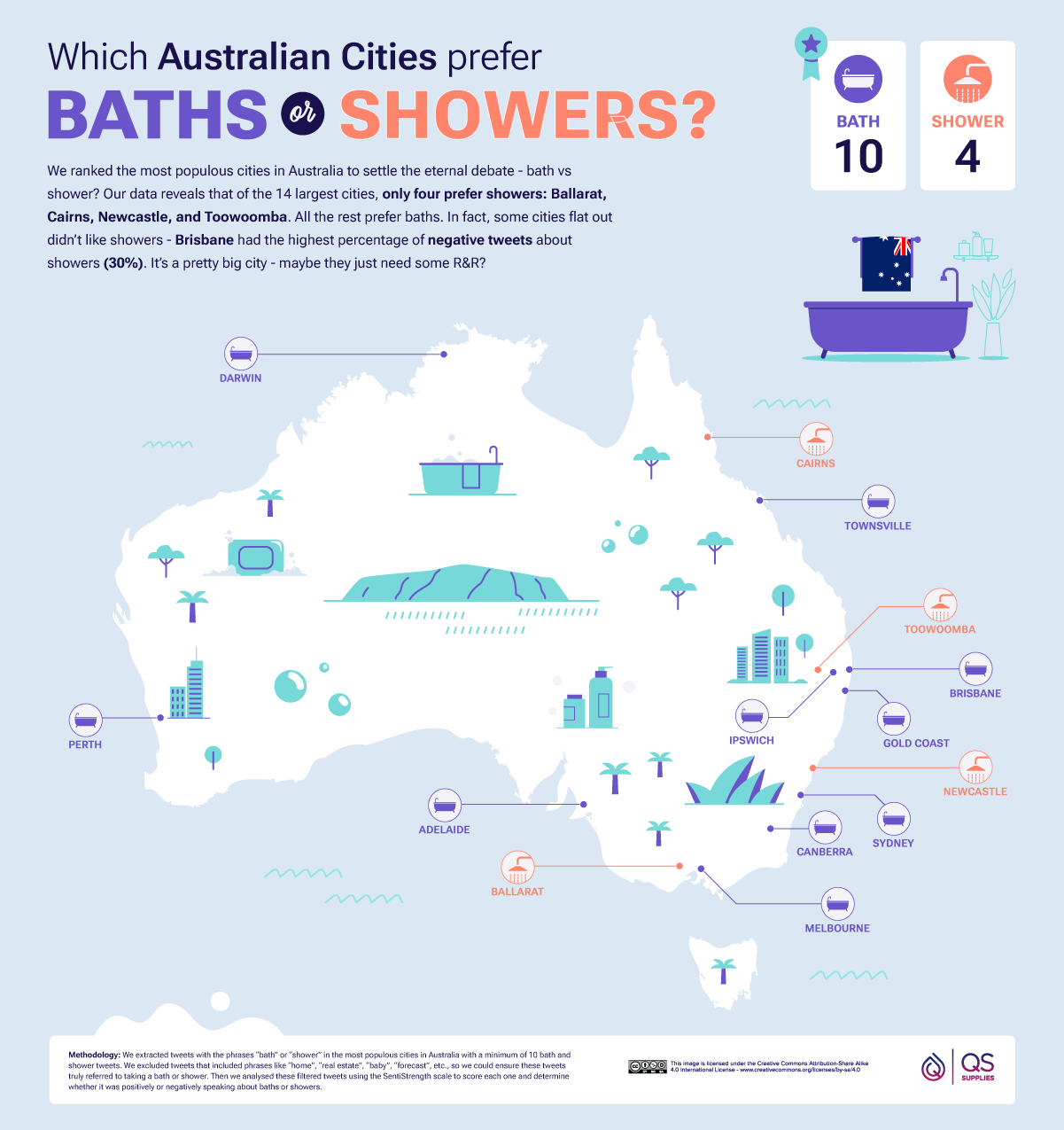 Australians are more likely to shower daily than their U.S. counterparts, and many shower two or three times per day. And yes, Australia's Twitter users are more positive towards showering than those in the UK or U.S. But still, only four out of 14 large cities prefer the shower overall.

“I don't think anybody should go around smelling,” says Sandy Skotnicki, assistant professor at the University of Toronto's Department of Medicine. But Skotnicki does follow the line of James Hamblin and other dermatologists: “When you wash it, you break [your natural biome] down. You actually break down a wall so you become leaky. And you can increase what comes through the skin.” Still, the 'cleaner' shower option is more popular than the bath in a substantial 28% of large Canadian cities, according to our findings. 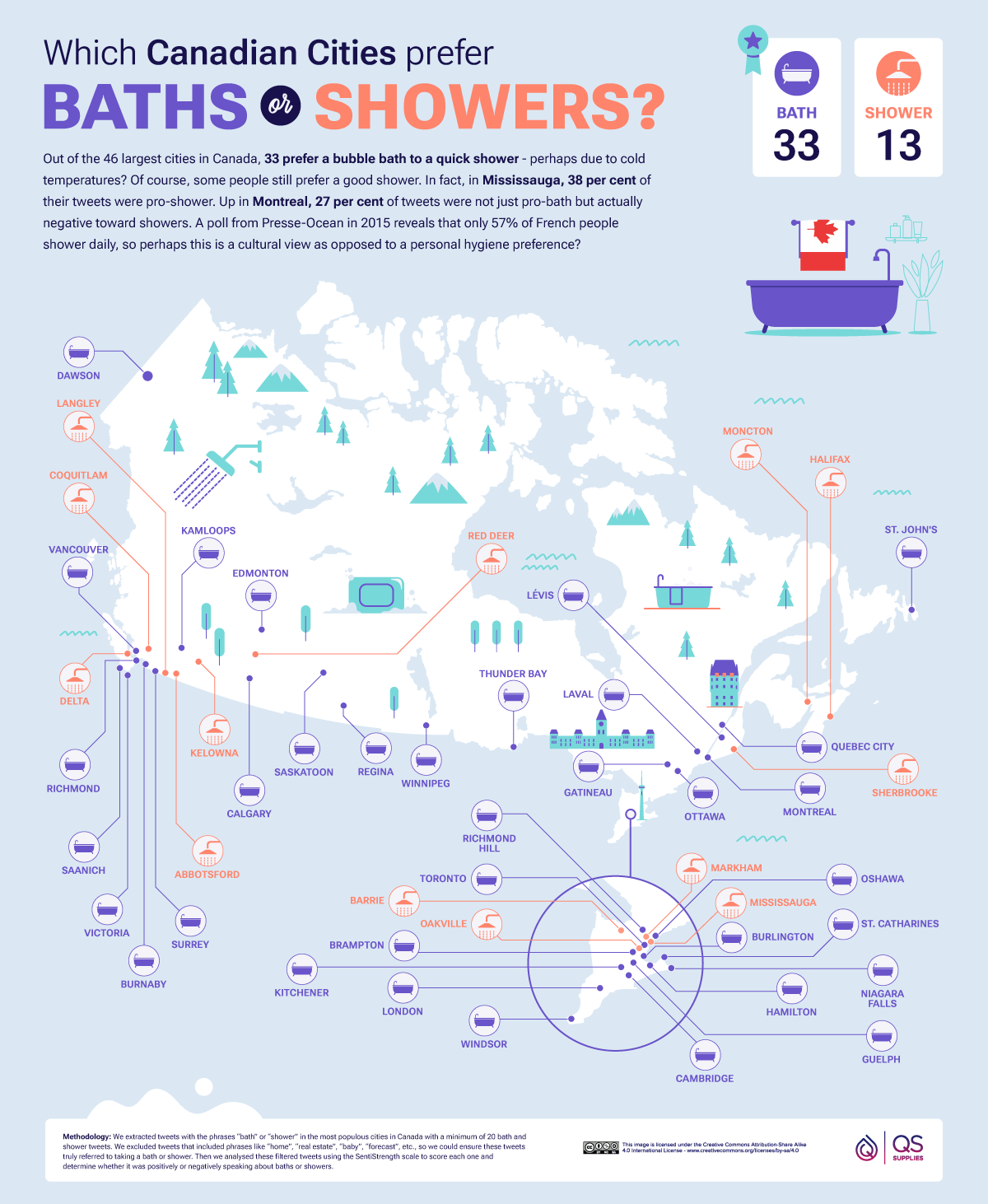 Still, the major cities of Montréal, Vancouver, and Toronto prefer the tub, leaving Halifax as the biggest city with enough data to be declared a shower town.

So, worldwide, the baths have it. But while adding a bath to your home may seem like a great selling point/value booster, it's important to consider your particular space. Squashing a big tub into a little bathroom is only going to look bad. But swapping out a bath for a corner shower can free precious floor space in a small bathroom, creating a roomy impression on potential buyers.

Because (Twitter) science is science, but when it comes to choosing a bath or a shower, sometimes you have to follow what you feel.

We retrieved tweets containing the word “bath” or “shower” and extracted the geolocation coordinates with a focus on the US, UK, Australia, and Canada.

We filtered these tweets so that those containing the word “bath” didn't include anything like “home,” “real estate,” “square footage,” or “tornado,” “weather,” etc. And we filtered tweets containing the word “shower” so that they didn't include phrases like “baby,” “rain,” “storms,” “wedding,” etc. In other words, we made sure that the main topic of these tweets was either taking a bath or taking a shower.