Look Back On 500 Years Of Bathrooms In 90 Seconds

Admit it: you take your flushable toilet for granted. You might even be fed up with it and looking for a more stylish bathroom throne on which to sit.

But consider yourself lucky. Until a century and a half ago, the flushing toilet was a rare feature. And 500 years ago, most of us would’ve used a plank of wood with a hole in it.

On the other hand, in the 1500s, it wouldn’t have been unusual to bathe with a group of friends and a cheeseboard. Win some, lose some.

A lot of great bathroom ideas have been lost to time. So, QS Supplies has recreated a typical bathroom space from every century back to 1520. Watch the evolution of the bathroom in this video, then scroll on for a closer look at inspiration from across the history of the smallest room.

In the 16th century, a home tub was a luxury for the wealthy (the trend took off after the plague forced the public baths to close). Before the hot tap and under-floor heating, bathers heated the water in a cauldron. A free-standing wooden bathtub would be pushed up close to an open fire for warmth. 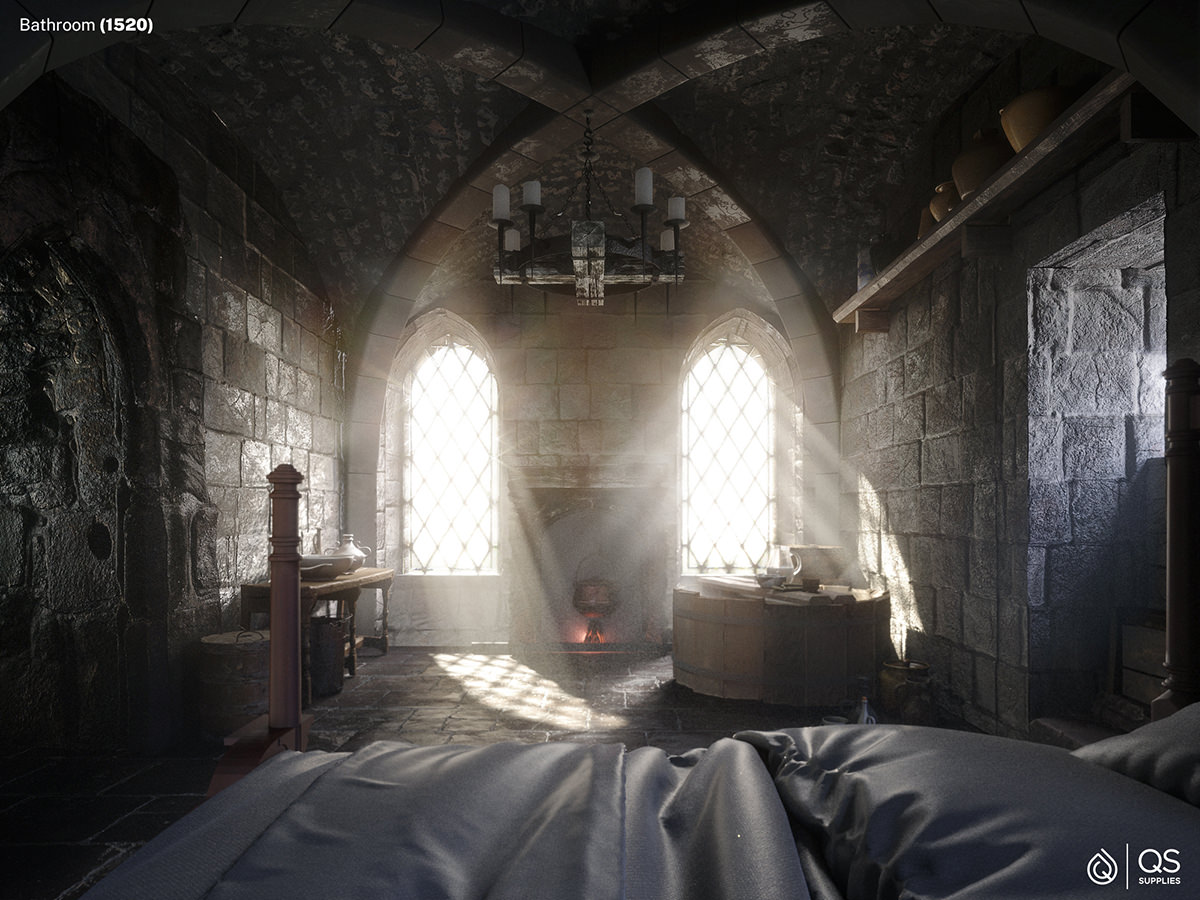 The toilet here is a hole overhanging the street in the nook (known as a garderobe) on the right. Folks used a lavabo or ewer (jug) and basin for hand-washing. The lavabo was often made of brass and hung on a trammel hook over the fireplace so it could be turned to the spout-side when needed. Today, a vintage jug and bowl set makes a handsome ornament or vase if you keep fresh flowers in the bathroom.

By the 17th century, having your bath in public with other people around was no longer cool. Instead, the family would take it in turns to use the hot water in the home tub, which would now be lined with steel to stay warmer longer. This was a hassle, so even those families who had a tub would bathe infrequently. In the streets, perfumes and pomanders battled for control of the air against the stench of waste and the ‘great unwashed.’ 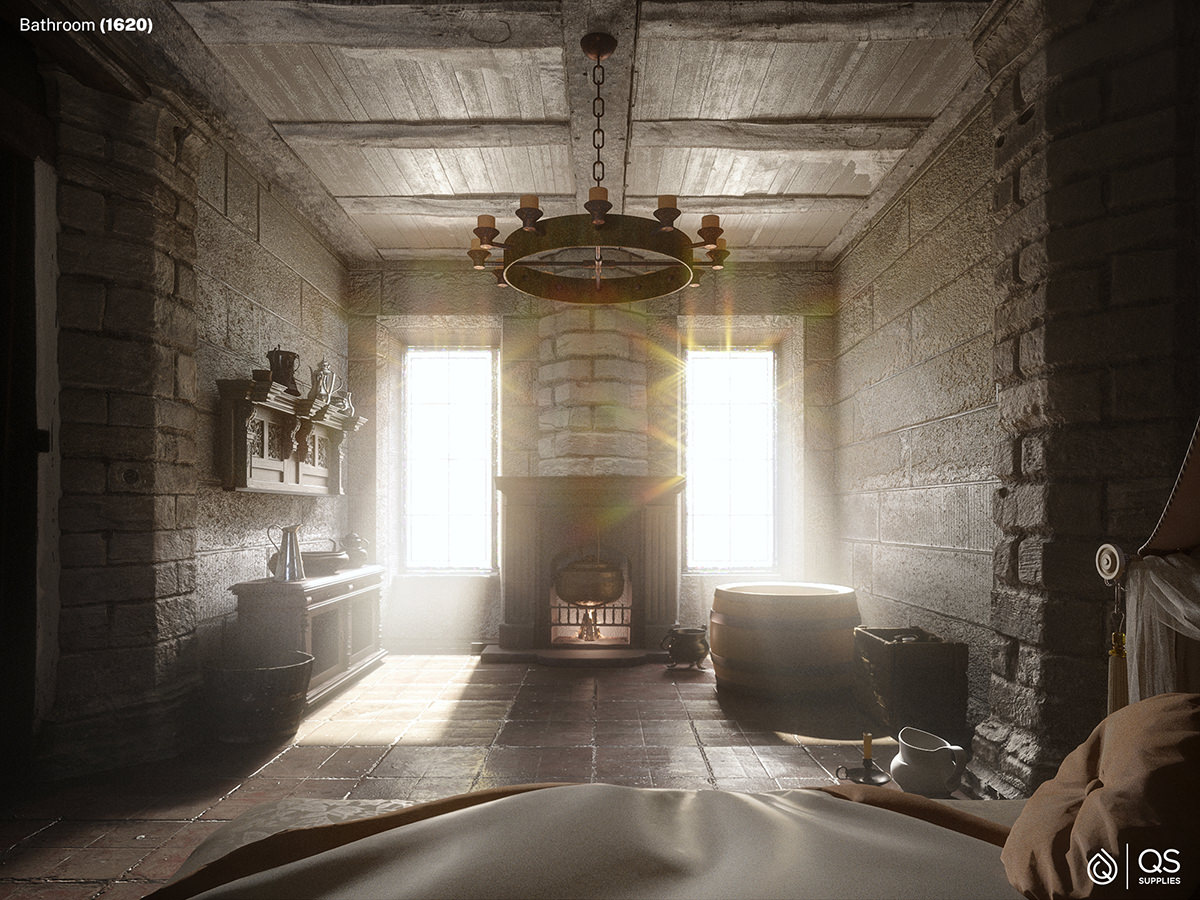 The flush was first invented in the 1590s but didn’t catch on until the 19th century. Instead, your bedroom would have a chamber pot for nocturnal wees, kept beneath a washbasin on a washstand. In wealthy homes, the washbasin and jug would match, and the chamber pot might be part of the same set, too.

By this time, the commode – a seat or box with a hole in it – was becoming popular. Users would keep a porcelain or copper pot under the hole to catch the waste. However, a watchmaker named Alexander Cummings invented the S-pipe in 1775. This was one of several developments that would lead to widespread adoption of the flush and the modern bathroom as we know it. 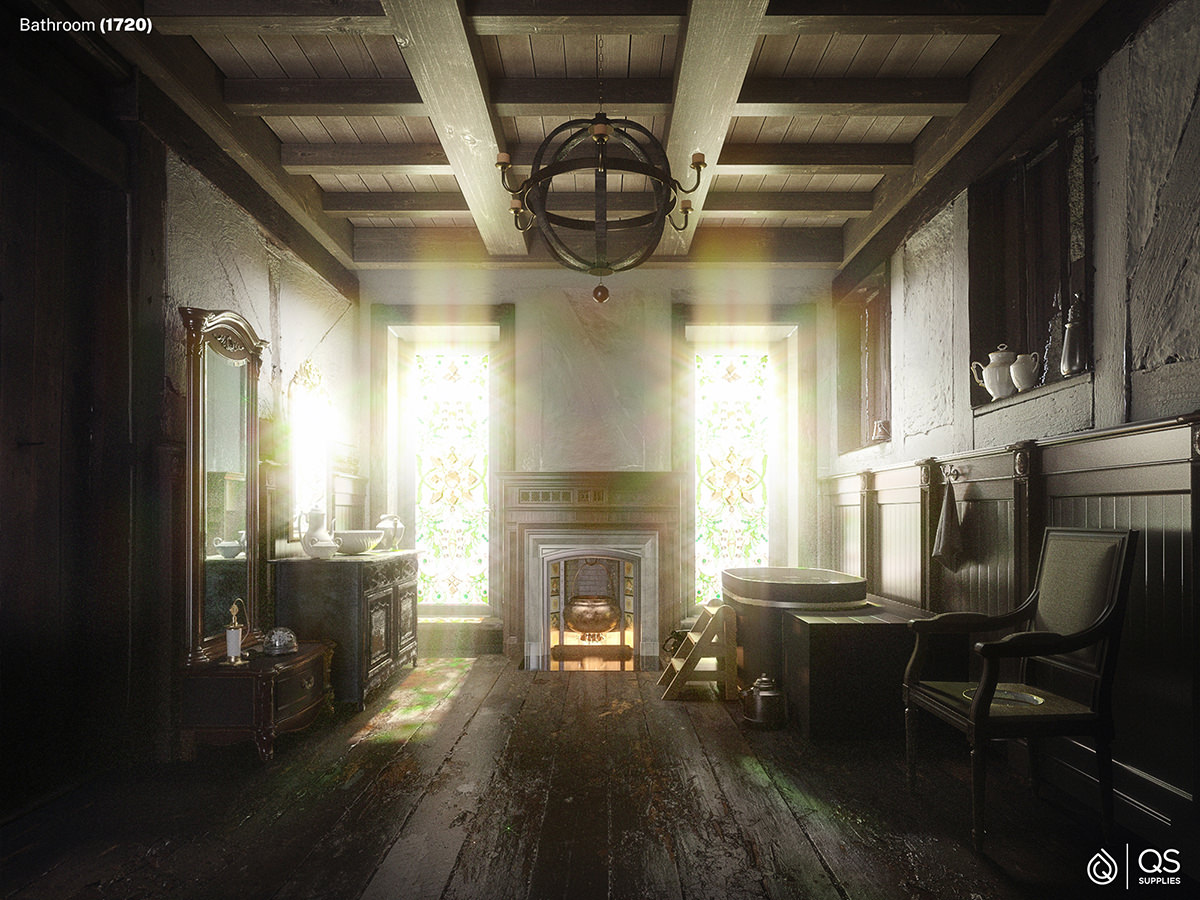 Until the late 18th century, mirror glass was expensive to make, and only fancy people had mirrors. The looking glass was a status symbol, sometimes draped with little curtains to add glamour and mystique. But with technical developments, mirrors started to get cheaper and, at the top end, more ornate.

In the 19th century, the industrial revolution landed, the population boomed, and the UK faced a public health crisis. In some over-crowded cities, 100 people might share the same toilet, which would spill out into the streets and rivers. The government passed legislation to improve standards, and the development of sewers and indoor plumbing meant the flushing toilet and running water grew in prevalence. 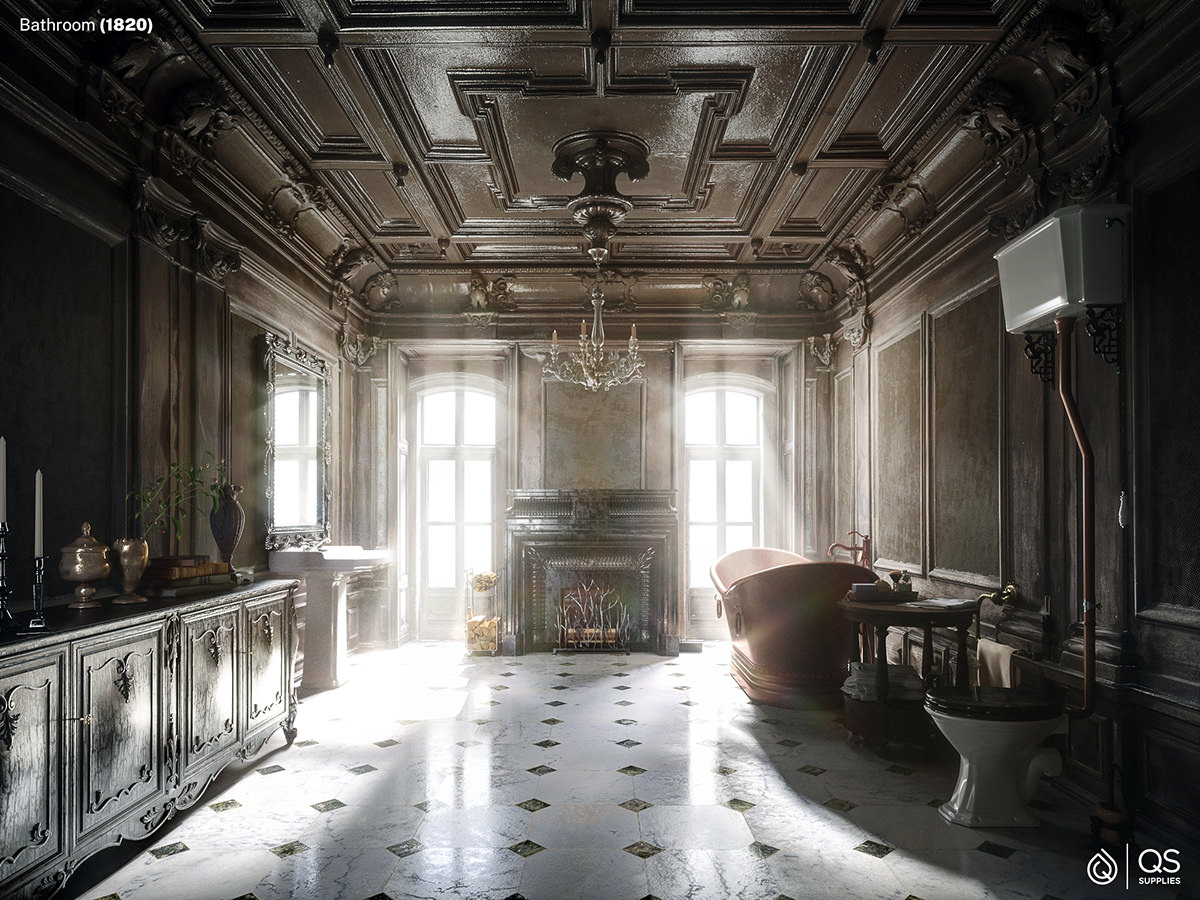 All this piping signalled the end of movable commodes and basins. With stationary sinks and bathtubs, the modern bathroom was born as a dedicated space for personal hygiene. This was the age of Thomas Crapper and Henry Doulton, and JL Mott tubs. Exposed pipes became popular and were embossed, glazed, or gilded for effect. The Georgian era enjoyed a copper craze – hence the copper bath. Toilet paper was patented in 1880 and sold at Harrods.

The modern bathroom blossomed in the 20th century – as did modernism, interior design, and consumerism. Designers and manufacturers capitalized by inventing countless extras to absorb homeowners’ disposable income and brighten their bathrooms: towel-, toothbrush-, and bar soap- holders, vanity cupboards, seat covers, and shower mats and curtains. Electric lighting was commonplace by the start of World War II. All the better to see those matching bathroom suites coloured in peach, mint green, or flamingo pink. 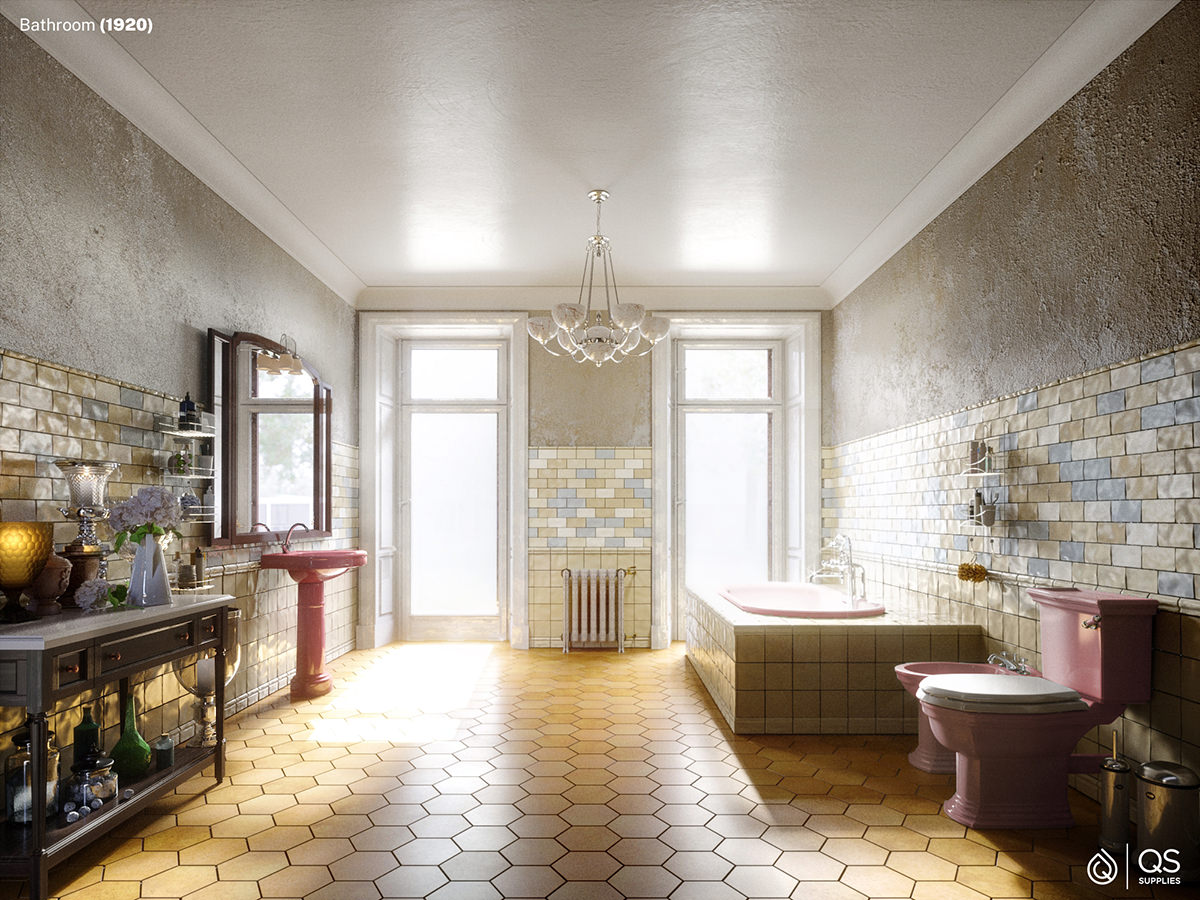 And let’s talk about tiles. The bathroom tile became ubiquitous in the 1950s. Ceramic tiling was laid in such high quality that much still exists today. Plastic, considered a space-age material, also became a popular choice for tiles for a while. The tile was and is bright, hygienic, and waterproof. Ceramic tiling remains an intelligent choice for a bathroom refurb that will last years – keep the tiles plain, and you can switch the colour scheme and furniture if you feel like re-touching the bathroom later.

We’ve come a long way from the barrel tub. A 3D bathroom planner uses science to optimize awkward spaces. Materials that weren’t even around at the turn of the century now make all kinds of shapes and solutions possible. Fiberglass, acrylic, and porcelain coatings offer style and practicality. The apron-front (enclosed) bath that dominated the 20th century has fallen out of fashion, with free-standing oval, pebble, or double-ended baths now looking good at a good price. 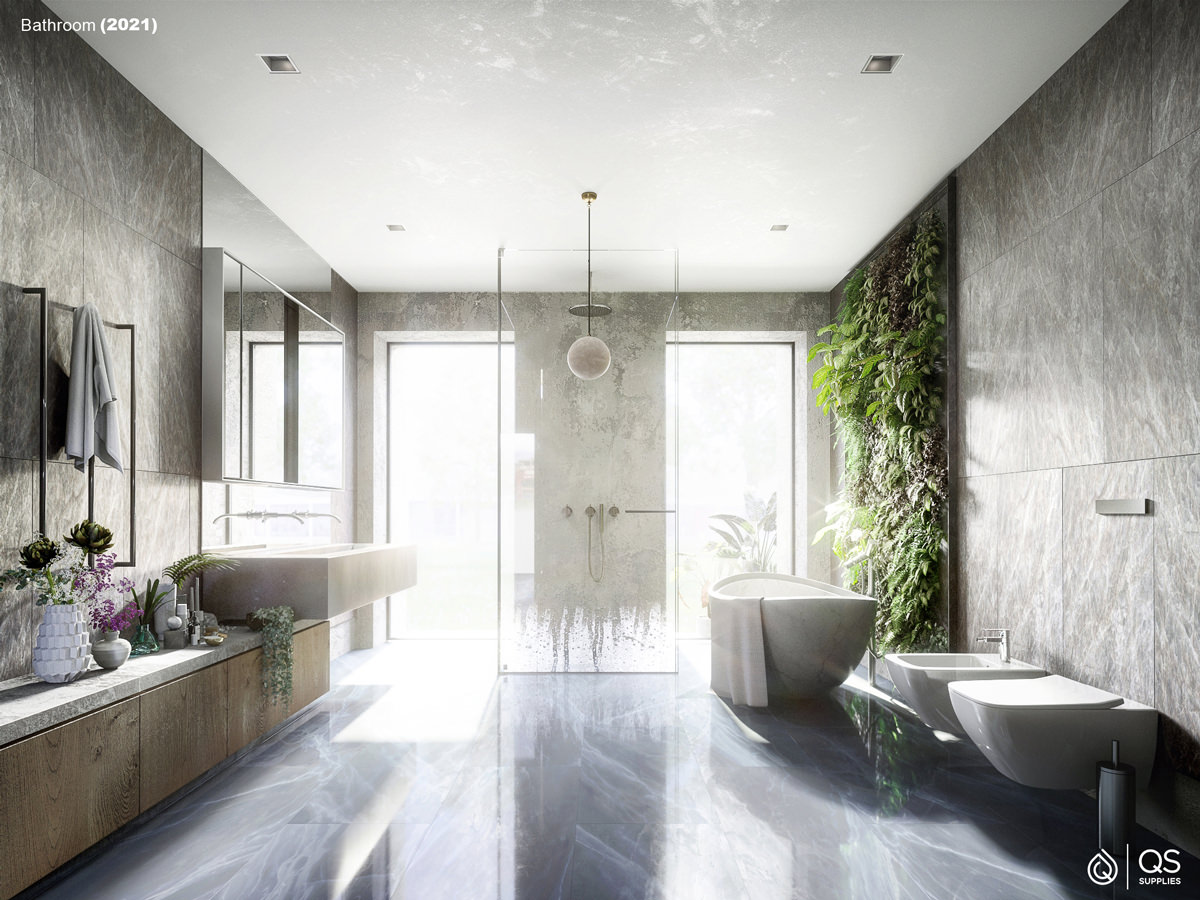 A free-standing bath demands a floating sink for an ultramodern take on the vintage basin stand. It creates more space on ground-level, making even the smallest bathroom feel spacious and classy. Combine it with smart taps and a tankless hanging toilet to complete the zero-G feel and make cleaning the littlest room a breeze.

It is now impossible to imagine life without the comfort and practicality the modern bathroom delivered in the 20th century. But the bathtubs, cisterns, and rudimentary storage solutions of the past 100 years now feel cumbersome.

In their place, the 2020s offer sleek, futuristic bathroom solutions inspired by the best of what came before the flushing toilet and running water. Combine the latest ideas with classic design, and your bathroom is sure to be a luxurious and relaxing place to be. Something you definitely won’t take for granted.

With our world revolving around bathrooms at QS Supplies, we bring you the best products for your home or business. Sound in quality, innovative in design and competitive in price, our bathroom products redefine comfort. Select from our collection of shower enclosures, bathroom furniture, heated towel rails, shower rail kits, designer radiators and more. Visit us at QSSupplies.co.uk and take advantage of the best choices.