Think about what a party means to you. After March of 2020, it probably means something a little different. But there are, of course, memories of yesteryear as well as plans for the future that we can hold dear. So when you do indulge in even an imaginary party scene, what gut reactions surface immediately? Are you happy to host the event? Are people enjoying themselves? What memories will you take with you? We want to know what the mind of a host will look like when the world is once again able to party off-screen, so we dove right in.

We asked more than 1,000 people living in both Europe and the U.S. to tell us about all the parties they had ever hosted. We heard some nostalgia mixed with some of their worst party experiences and were privy to what they expect of any party guest going forward. We've also asked about the ins and outs of the newly popular virtual parties. If you're curious about partying on-screen or are looking forward to your next party off-screen, you might want to read what these experienced hosts (and guests) had to say.

During this time where people are spending hours on end at home people are turning to a different form of entertainment: virtual parties. No need to leave the house when you can socialise with anyone, anywhere with just the press of a button. Over 1 in 10 respondents actually preferred this method over parties "IRL." 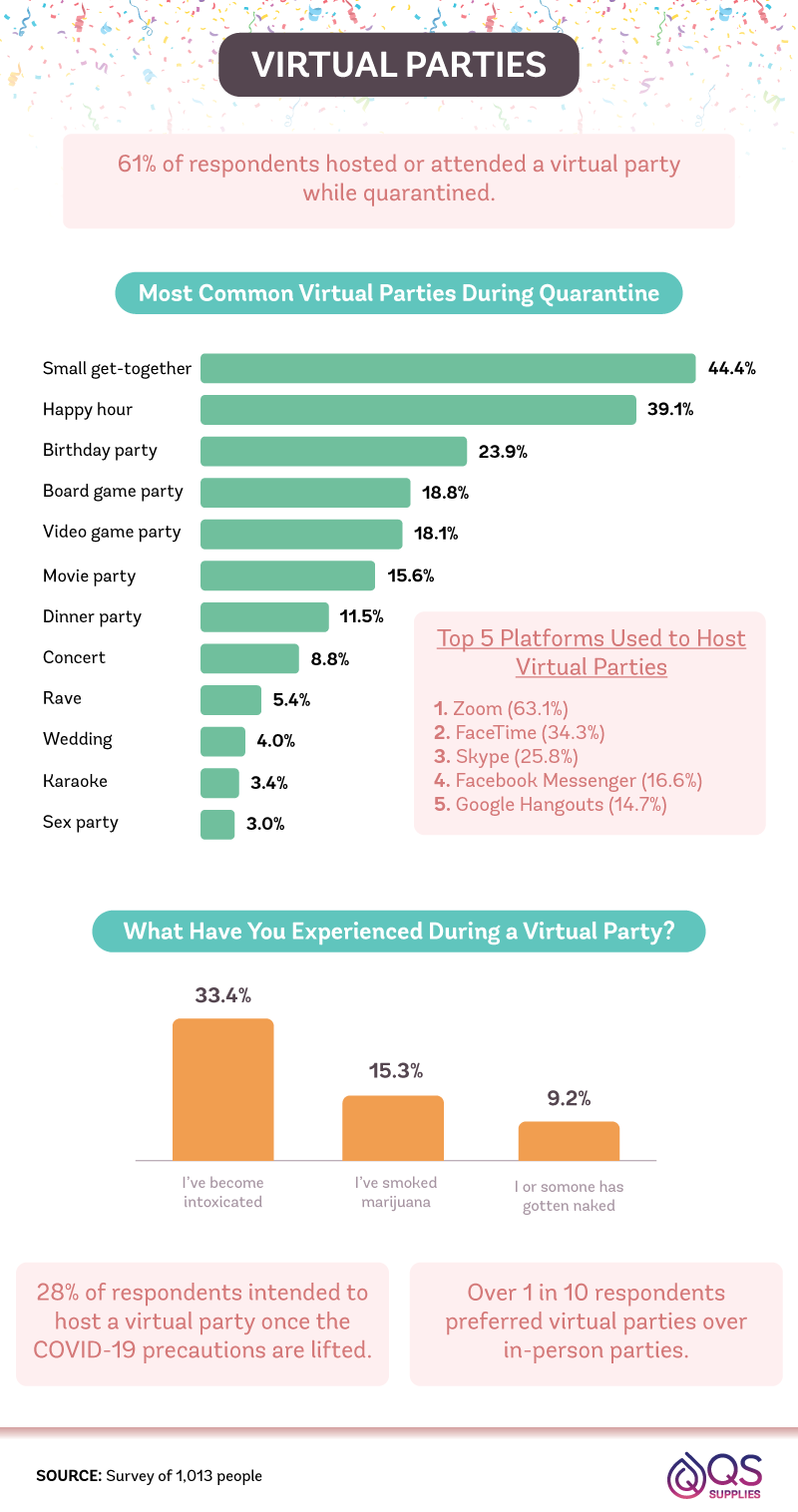 People have developed all sorts of ways to keep themselves sane during this time of isolation from the outside world. Workers from a company in Fairfield, Connecticut, bored from a lack of March Madness, developed a form of virtual beer pong, dubbing it "March Sadness." Involving alcohol during virtual meetups seems to be a popular idea, as 33.4% of our respondents admitted to becoming intoxicated during a virtual party. A far less – yet still startling – percentage of our respondents also admitted to getting naked or witnessing nudity during an online party.

The most common type of virtual parties while social distancing for our respondents was a small get-together (44.4%). Second to this type was happy hour (39.1%), which makes sense considering restaurants and bars across the country have had to close their doors to groups of people. Even nonpublic parties are making their way to the virtualscape, such as sex parties, which 3% of our respondents had experienced.

The platforms used to host these virtual interactions vary, but, according to our respondents, Zoom had an overwhelming lead over any other platform. Zoom's usage almost doubled the usage of the second-most used platform, FaceTime. With popular games at the tips of users' fingers similar to Cards Against Humanity and Scattergories, it's no wonder Zoom has become a favoured platform.

When the time comes to pay for an in-person party, the spending habits of Americans and Europeans will perhaps change permanently. American culture encouraged far more spending than British culture, or at least Americans spent vastly more on their parties. While the average European respondent said they would spend 135 euros on a party, Americans were willing to spend 281. Americans were also more than twice as likely to say they would throw a party on a budget and spend less than $100. 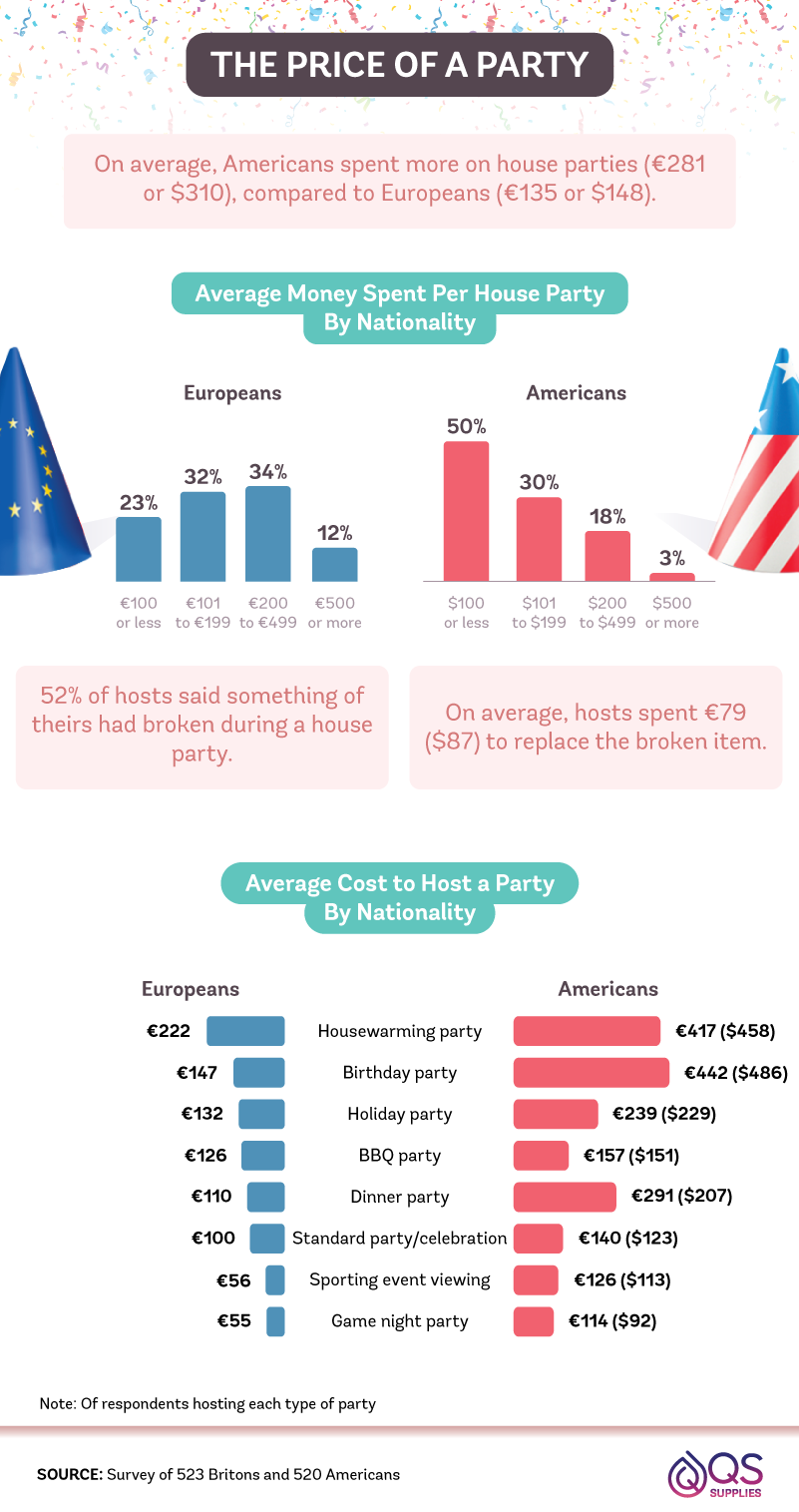 The most costly party for Europeans was a housewarming party for which they typically spent 222 euros. Though Americans spent more, on average, ($458 or 417 euros) on housewarming parties, their birthday parties took the cake, literally and figuratively. Americans were willing to spend an average of $486 on their birthday parties. Business Insider recently wrote a piece discussing the trend of American birthday parties becoming even more extravagant than weddings. This country is also home to shows like "My Super Sweet Sixteen" and the infamous "Keeping Up With The Kardashians," both of which often showcase spending heavily on parties. Perhaps these shows have normalised the behaviour and influenced American viewers to overspend as well. Even dinner parties had American respondents spending an average of $207 (291 euros), compared to just 110 euros that Europeans allotted to get together for food with friends.

Every host knows the feeling of throwing a party and nervously waiting for your very first guest to arrive. This feeling may have sparked the common wish that hosts had for their party guests to arrive exactly on time. Seventeen per cent wanted them to arrive even earlier than this to help get things started. 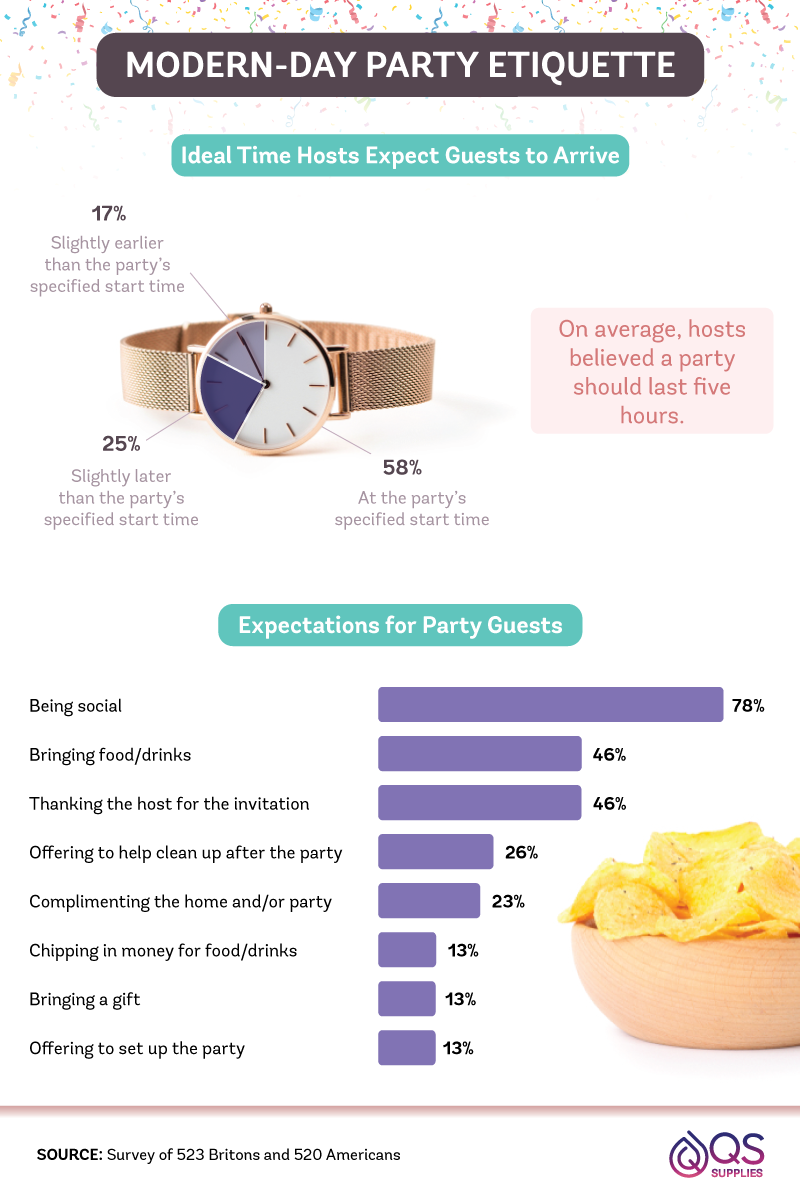 At an absolute minimum, 78% of hosts hoped their party guests would be social once they arrived. This was a more common expectation than anything else, really. Bringing food or drinks is certainly nice but was expected by a little less than half of hosts. A simple "thank you" to the host was also expected by about the same amount. A compliment was particularly important to women, while men were holding out hope that guests would chip in financially for the food and drinks provided. Host gifts and offering to help were rarely expected –only 13% of people expected these things – but some experts insist that bringing a gift leaves a lasting impression and can be a great networking opportunity. Even if it's not expected, you may want to consider it. Fifty six per cent of European respondents rarely or never showed up empty-handed to a house party, even when the host instructed not to bring anything, compared to Americans at 35%.

In what was perhaps a subconscious effort to make the quarantined world at large feel better, we turned our study to look into the most nightmarish aspects of partying together in real life. Birthday parties took the cake, so to speak, for the most nightmarish type of in-person party. These took hosts 5.7 hours on average to prepare for as well as an additional 2.7 hours to clean up.

But even the most accommodating party hosts had their triggers, as most respondents agreed on certain party pet peeves. The worst thing, however, was simply a lack of presence: 61% were bothered by somebody deciding not to show up. More than half were also (understandably) bothered by guests who left a mess in their bathroom. Smoking often breaks rental contracts as it easily damages paint and interiors, while even vaping is thought to leave behind an unwanted residue. Bringing uninvited guests was also a common no-no amongst party hosts. And after all of this bad guest behaviour, to not even get a thank you irked 26% of respondents.

Lastly, our study dug into the top real-life nightmares of hosting a house party. Twenty-two per cent risked damage to their reputation with their neighbours, who ultimately complained about the party. Another unlucky 17% of hosts had to deal with their guest(s) throwing up on the floor of their home. Floors and the integrity of the house were damaged more than this, though –16% were left with a clogged toilet, nearly one in ten found urine on the floor, and 7% said their home was vandalised in some way. 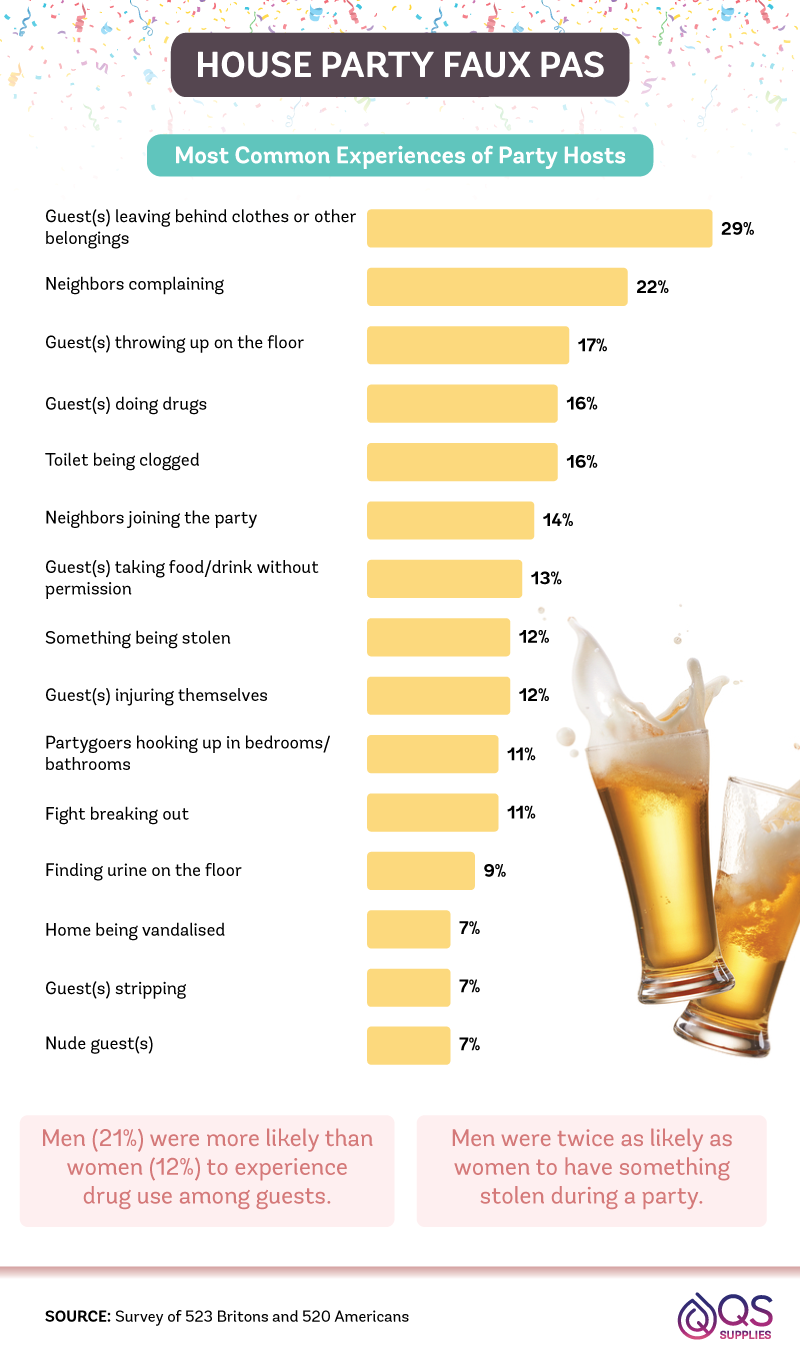 Other faux pas were more intimate: 11% of hosts reported partygoers hooking up with one another in the house, while 7% said guests stripped or got completely naked during their shindig. Sadly, thievery was also somewhat prevalent amongst guests –12% of hosts had something stolen from their residence, though this was more common amongst men.

Especially now, we've come to see the true value in socialising, though temporarily at a distance. Gathering with friends and family can be a valued and cherished part of our shared world culture. While participants shared some downsides to partying, there will soon be days where we are again celebrating birthdays and experiencing things getting pretty wild, as respondents suggested. Most agreed on the importance of certain party manners, but if you do experience a party guest who goes too far and breaks something, consider looking to QS Supplies for a tune up.

QS Supplies can refresh not only bathrooms, showers and kitchens, but heating and furniture. With the absolute best supplies at deeply competitive prices, QS Supplies is happy to help your home rebound from a party or just maintain a welcoming atmosphere. Your future and even digital party guests will certainly take notice.

We surveyed 1,013 Americans and asked them questions about party habits while adhering to social distancing recommendations. Of these, 52% identified as female, 47% identified as male, and less than 1% identified as nonbinary. Respondents ranged in age from 18 to 76 with an average of 35 and a standard deviation of 11. The survey was conducted from April 8 – 13, 2020.

Additionally, an earlier survey was conducted from March 13 – 15, 2020, to explore house party etiquette, pet peeves, and nightmares. We polled 523 Europeans and 520 Americans. Of these party hosts and attendees polled, 50% were female, 49% were male, and less than 1% identified as nonbinary. The average age of respondents was 37 with a standard deviation of 12 years. An attention-check question was used to identify and disqualify respondents who failed to read questions and answers in their entirety.

The main limitation of both studies is the reliance of self-reported data. Self-report is faced with a wide variety of issues which include but aren't limited to the following: attribution, exaggeration, telescoping, and recency bias.

Think this data might speak to you and your future houseguests? If you do choose to share the information, be sure to link back to this page and that your purposes are solely noncommercial.