Even in our childhood homes, we understood how size and space could impact our relationships. Do you remember fighting with your siblings over the bathroom or maybe having to share a bedroom? Even with romantic relationships as adults, these issues can surface. However, we couldn't find exact data on how the home impacts couples living together, both in the UK and the US.

So, we took the initiative. We surveyed 507 Britons and 791 Americans who had lived with a romantic partner to learn how specific living arrangements impact happiness, harmony, and even sexual satisfaction. Does a certain home size prevent intimacy? Do Britons or Americans handle certain living situations better? Read on to find out.

Under the Same Roof

The first living situation we examined was how it arose. About half of couples found a new place to start a life together, while the remaining half was split between couples wherein one partner moved into the other's home and vice versa. But moving into a partner's home proved most difficult for the one who had to move, as 63% of people who did this said it felt they were encroaching on someone else's territory. On the other hand, respondents who stayed in one place were very likely to report a stress-free move despite these couples arguing the most after moving in together! Evidently, a territorial feeling is only stress-free at first. 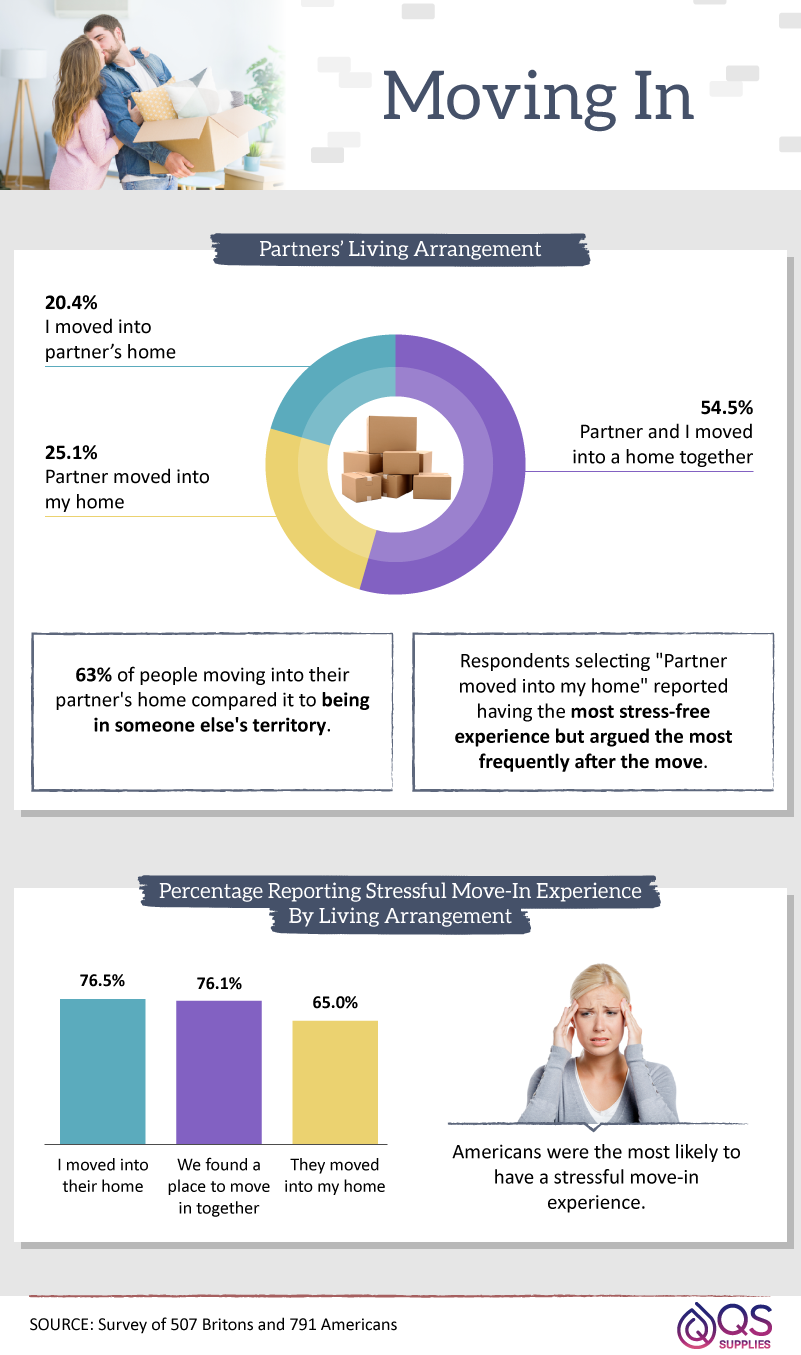 Overall, American respondents reported higher levels of stress during their move-in experience than Britons. Perhaps this has something to do with living costs being higher in the US than the UK, as financial burdens are likely to put pressure on any given argument, especially ones about moving. Regardless of who did the packing, however, British respondents did seem less stressed.

Certain sacrifices come with shared living spaces, but romantic situations might be an interesting exception to this rule. Around 55% said they didn't have to sacrifice any home element to reach a compromise with their partner when moving in together. And this lack of compromise actually turned out to be a good thing! Couples who sacrificed home elements also argued more frequently with their romantic roommates. 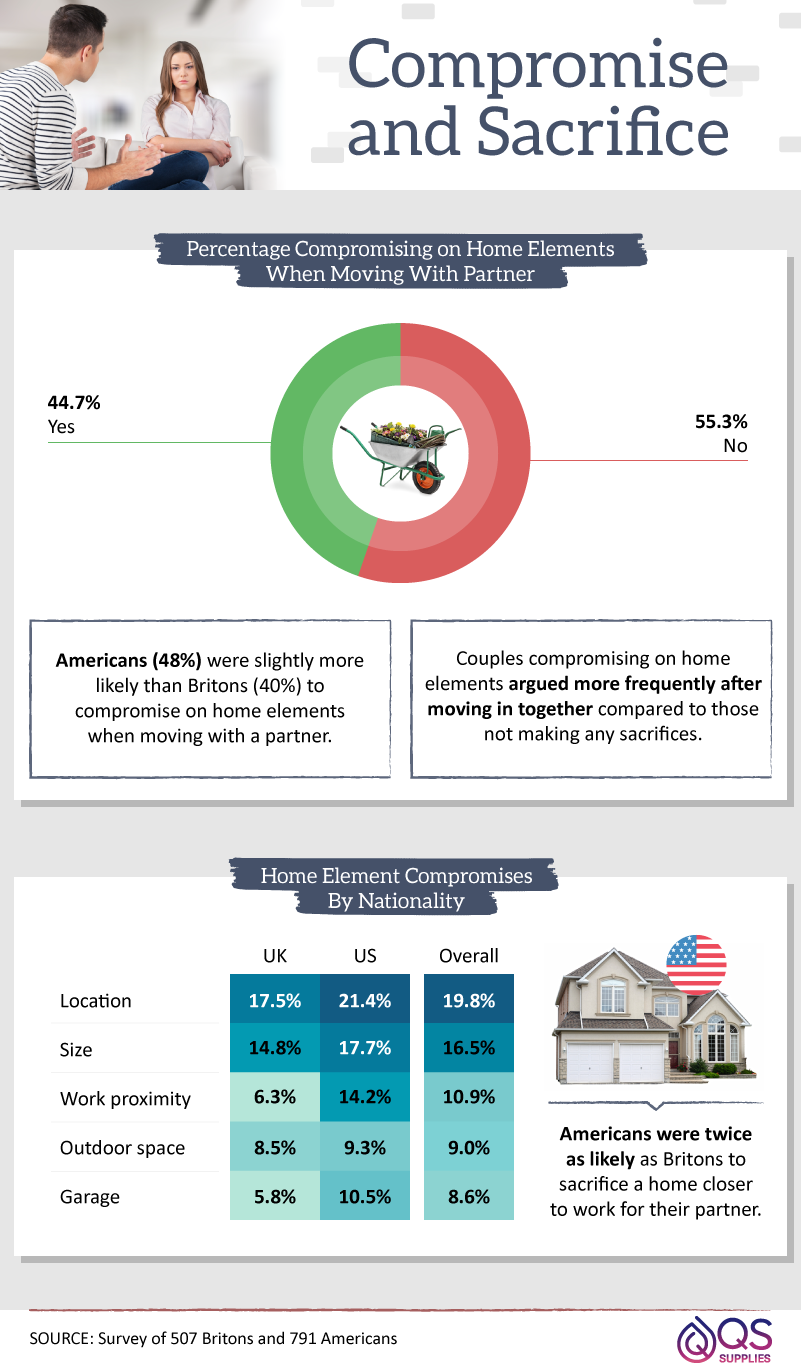 When couples did have to compromise, location was the top issue to surface. Nearly 20% of respondents said they had to make some kind of sacrifice to accommodate their partner when deciding where to live. Location is no small sacrifice, though, especially if you're buying a home and/or commuting. For Americans, moving in with their significant other was twice as likely to mean a home further away from work. Meanwhile, Britons were less likely to have to compromise on anything, whether it was home location, size, or even garage space. Perhaps these couples are more in sync!

Even if a couple didn't have to compromise, did they still get what they expected once they moved in together? The short answer is no. Most couples were surprised by at least a few things once reality sunk in.

Love, sex, and intimacy were all impacted by the move. While 37.6% thought they would enjoy more intimate nights in the bedroom, only 21.7% actually did. And more than a third said they actually had less sex once they were in close quarters. Research has shown that much of the sexual decline in Britain has been amongst people older than 25 and in long-term relationships. "Me time" (whether intimate or not) was also sacrificed by 1 in 3 participants. A decrease in home size also took libido down with it. Those who shared less than 50 square metres were the most likely to have less sex.

Despite the lack of sex, less than 50 square metres of shared space seemed to have some perks. Couples with spaces of this size felt more in love, argued less, and even lost weight. These couples also reported getting the most "me time." Perhaps small spaces encourage those living inside to get out on their own more often.

Size of an Argument

The smaller the home, the bigger (or at least more frequent) the arguments. Those who shared less than 50 square metres fought an average of 4.8 times every month –more than once a week! And the arguments usually had to do with the home. Most complained of chores not being done (40.6%), cleaning habits (32.3%), and paying the bills (26.8%). Additionally, those with less than 50 square metres of shared space were the most likely to fight about not spending enough time together.

But large homes came with their own set of challenges, as well. Couples with more than 200 square metres of living space were the most likely to fight about not having enough sex. And, apparently, the home temperature is harder to control inside these large homes, as this group also got into arguments most often about the thermostat.

Looking Back on the Move

More alone time – what people in smaller houses most often got – didn't always come about by honest means. 34% of people in less than 50 square metres of shared space had lied to their partner about their plans to have more alone time. And they were also the most likely to say they regretted moving in with their partner. Men were also more likely than women to resort to lying when they wanted alone time. 29% of the men surveyed (compared with 22% of women) admitted to lying to get away. British men were even 12 percentage points more likely than American men to lie about their plans.

Moving In With Love

Moving in together can be a wonderful part of any relationship. As our couples revealed, certain living situations helped them to have more sex, fall more in love, and even get more alone time. But our data also showed that certain home sizes made relationships more difficult and dishonest.

Respondents also discussed things like household chores and cleaning as argument catalysts after moving in together. But moving in together can be made a little easier and more fun with the right supplies. You'll likely be sharing a bathroom and kitchen with your partner, so make sure this shared space is as helpful and aesthetically pleasing as possible. Stop by QS Supplies for the best in bathroom taps, shower enclosures, radiators, towel rails and more to meet all of your and your partner's household needs.

To gather the data shown in the above study, two separate surveys were run containing the same questions, one for Americans (run using the Amazon Mechanical Turk service) and one for Britons (run through Clickworker). There were a total of 791 Americans and 507 Britons surveyed. Of these, 755 of the respondents were women, 540 were men, and three identified as neither.

To qualify for this survey, respondents had to currently live with a partner or significant other. All data shown above rely on self-reporting, and self-reported data can come with issues like telescoping and exaggeration. To combat these, an attention check was added to help ensure only those paying full attention were allowed to complete the survey.

Feeling like sharing with your partner? You're more than welcome to show some of the data we uncovered from these couples. But be sure it's for noncommercial purposes and that you link back to this page.