From History to The Evolution of Toilet 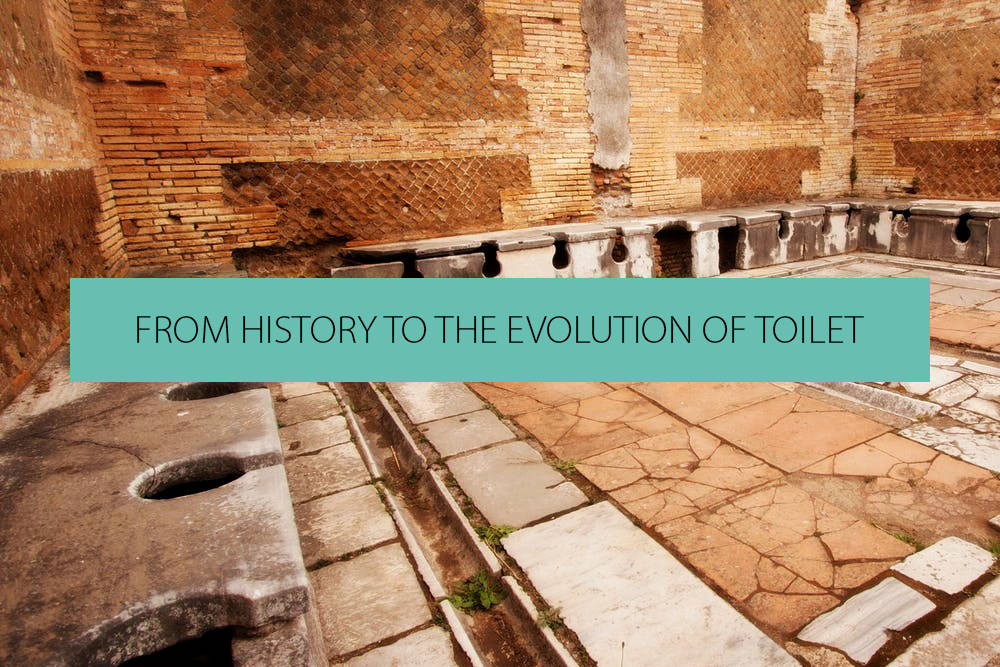 Toilets have evolved from holes in the ground to high-tech self-sanitizing entities of modern times. Although this evolution is yet to reach the developing world and poorer parts of the globe, however, most of the first world now has little to complain when they visit the toilet to take care of their daily business. The facilities we enjoy today are largely due to the efforts of engineers, innovators, independent thinkers whose efforts have benefitted all. Present-day toilets and toilet paper are a multi-billion-dollar industry, catering to the whimsical needs of the paying consumers.

Toilet designs and their use, through the ages, underwent many changes, encountered many hiccups, but slowly and surely transformed into the ultra-modern, hi-tech entities of today. Although there is evidence of the existence of toilet-like facilities in early times, the marked changes were seen since the advent of the Roman Empire. The Romans led the way to sanitization in the ancient world and as plumbing systems developed so did better toilet facilities. Widespread and rampant killer diseases like cholera and meningitis also pushed people to come-up with safe and hygienic facilities for disposal of human excreta. 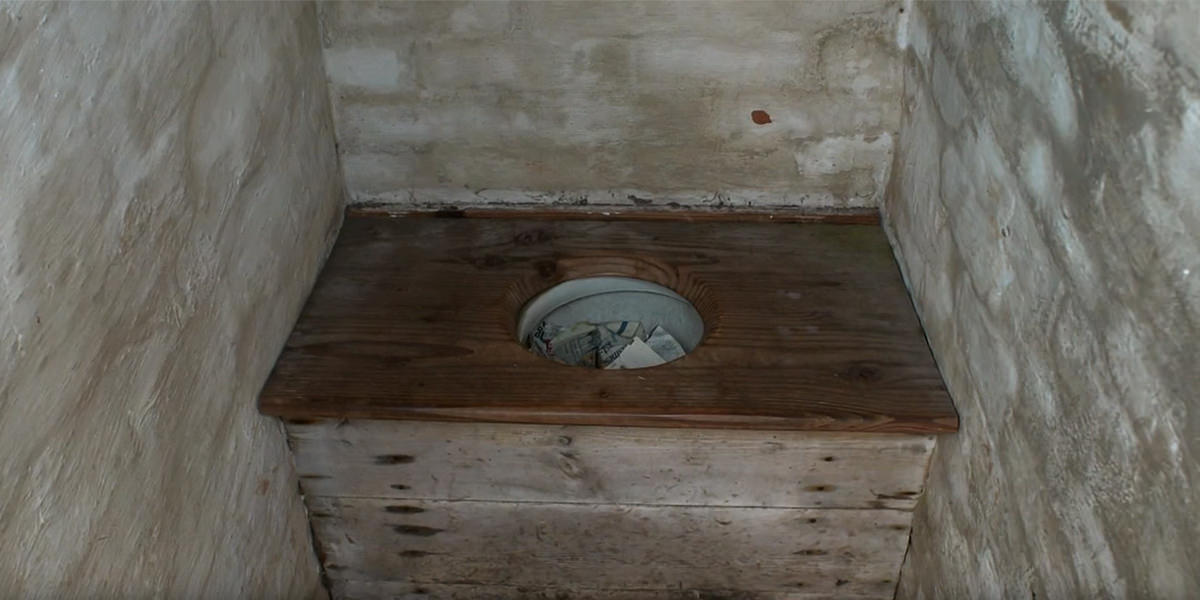 Since early times, the problem of dealing with and disposing-off body waste has posed a problem. So much so that even the Bible makes a mention of it through the quote, "And thou shalt have a paddle upon thy weapon; "and it shall be, when thou wilt ease thyself abroad, "thou shalt dig therewith, "and shalt turn back and cover that which cometh from thee." 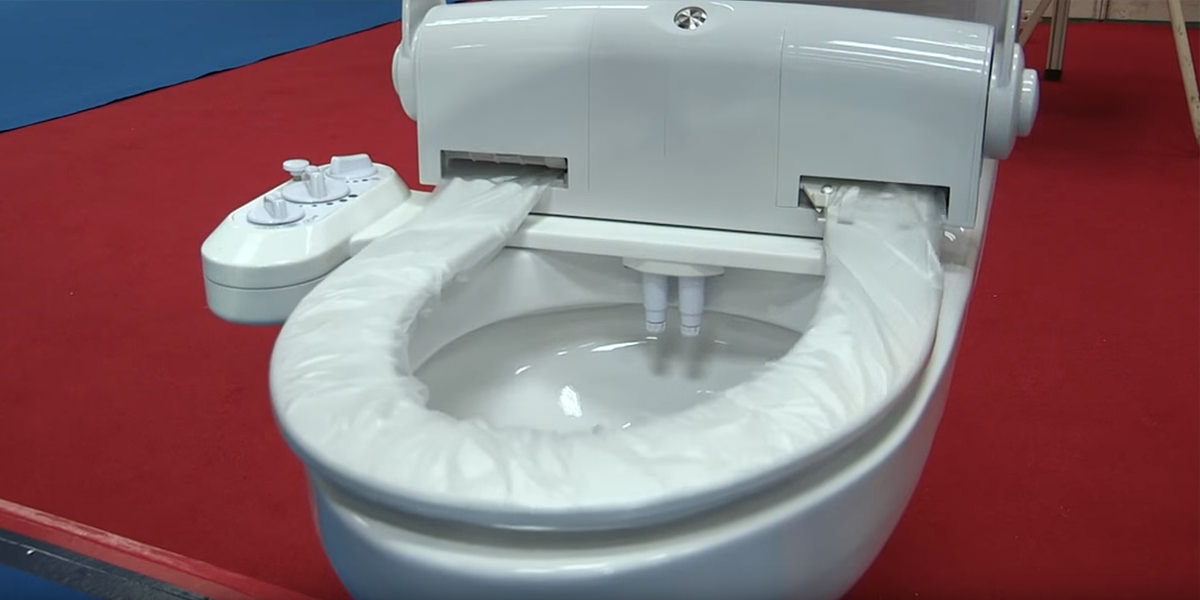 Apart from “how”, “where” is also an aspect that must be considered. An ancient Hindu text advices you on the exact spot to use. It suggests firing an arrow into the air and once the arrow lands, use its landing point to defecate. 2,000 years ago, the Vishnu Purana, mentions defecating atleast 150 feet away from rivers and 15 feet from a house. Besides mentions in religious texts, earliest records show that toilets were also found in the Indus Valley Civilization in ancient India. China and Babylon and the Island of Crete also witnessed the use of flushing toilets complete with drainage systems. 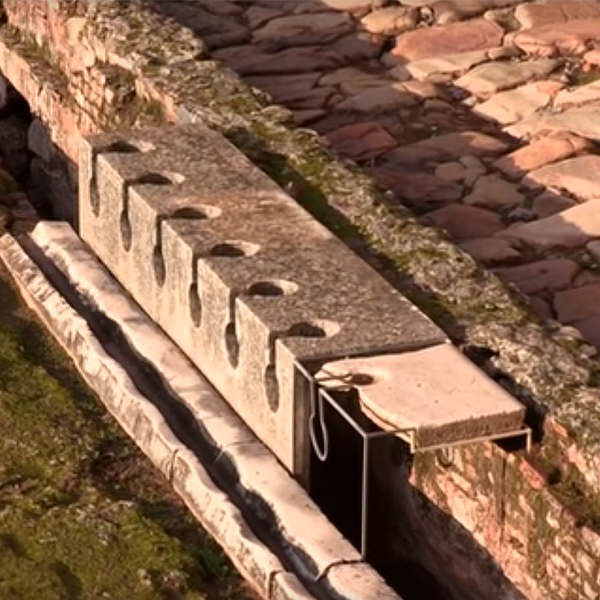 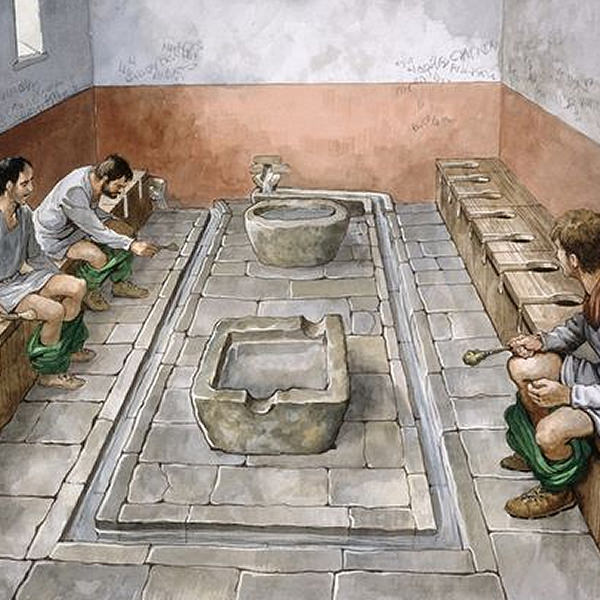 Roman engineering has been a showcase of technical supremacy, and the most prominent of these have been their drainage systems and latrines. Ruins found at the ancient city of Merida show that toilets were mostly communal or public. These latrines had 20 seats or more arranged in a circular manner, with users sitting there while their droppings fell into water constantly running beneath them, carrying waste into the nearest sewer. This system met the basic sanitary needs of flushing away the waste, removing smell without touching. A sponge attached to the end of sticks was dipped into water that ran through a separate channel for cleaning up. In Rome, the disposal of waste took precedence over personal hygiene or privacy as most of these were used by many people together who also shared the wiping sponges. 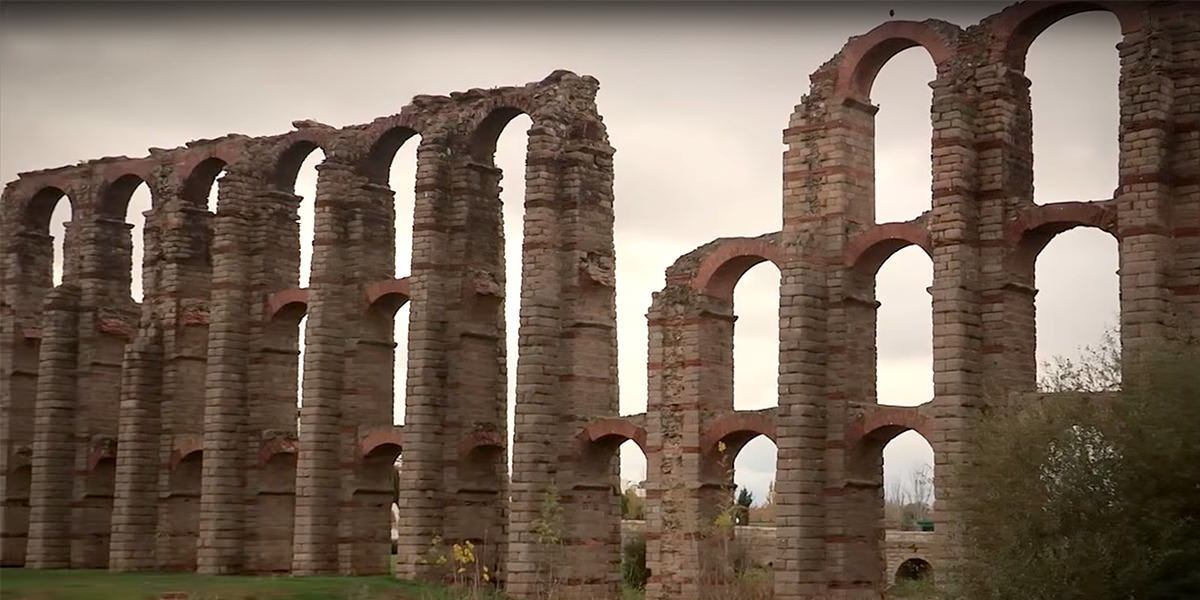 Romans recognized the idea of reusing water and channelized the wastewater from drinking fountains and baths for flushing the waste, which then moved out away from the city. This feat was no less a miracle with such a progressive plumbing system comprising of aqueducts built throughout the city. This was later introduced as the Acueducto De Los Milagros, the aqueduct of miracles. Roman author Pliny the Elder 'described the Roman sewerage systems as, '"The most noteworthy thing of all." As this system supported a population of over one million.

The British didn’t continue with the sanitary habits of the Romans. The reasons for this could be many; some believe that pagan Britons were against the contamination of water and therefore didn’t want to follow this system of the Romans. This hampered the further progress of sanitary systems, and for the next 1000 years, people went back to defecating in the open. 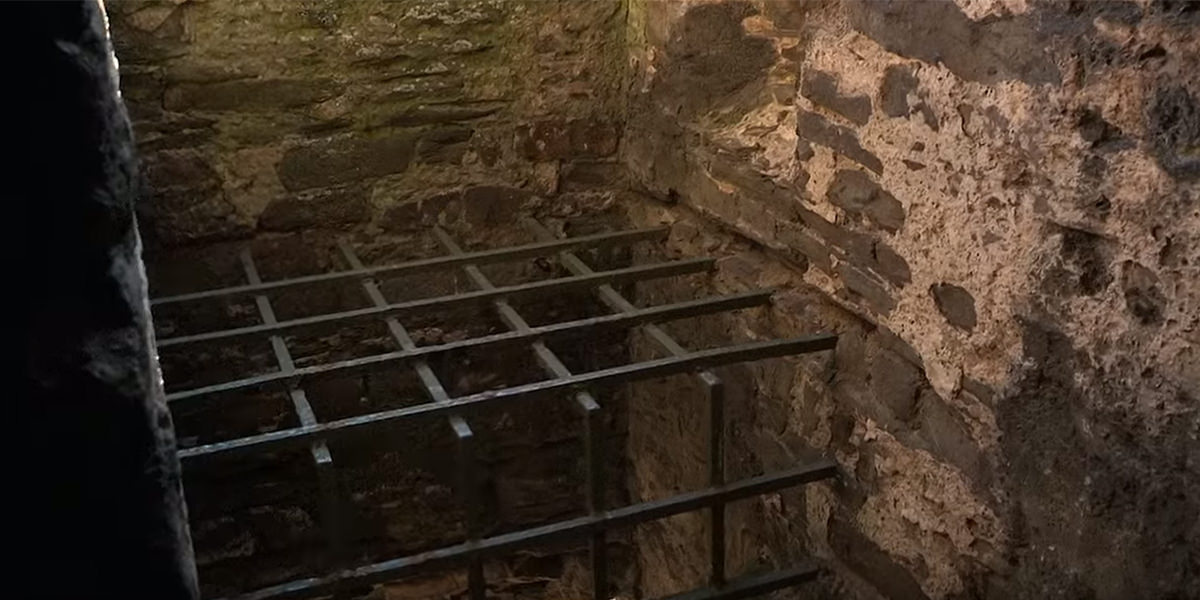 Sanitary practices in 13th century England were seen in castles and homes of the rich. There were Garderobes, a wooden seat on which you sat, and the waste dropped down into a chute, moat or river. Besides being extremely uncomfortable because of wooden seats, it is difficult for us to comprehend the terrible odour and congregation of flies, probably spreading over a wide area, especially in the summers. 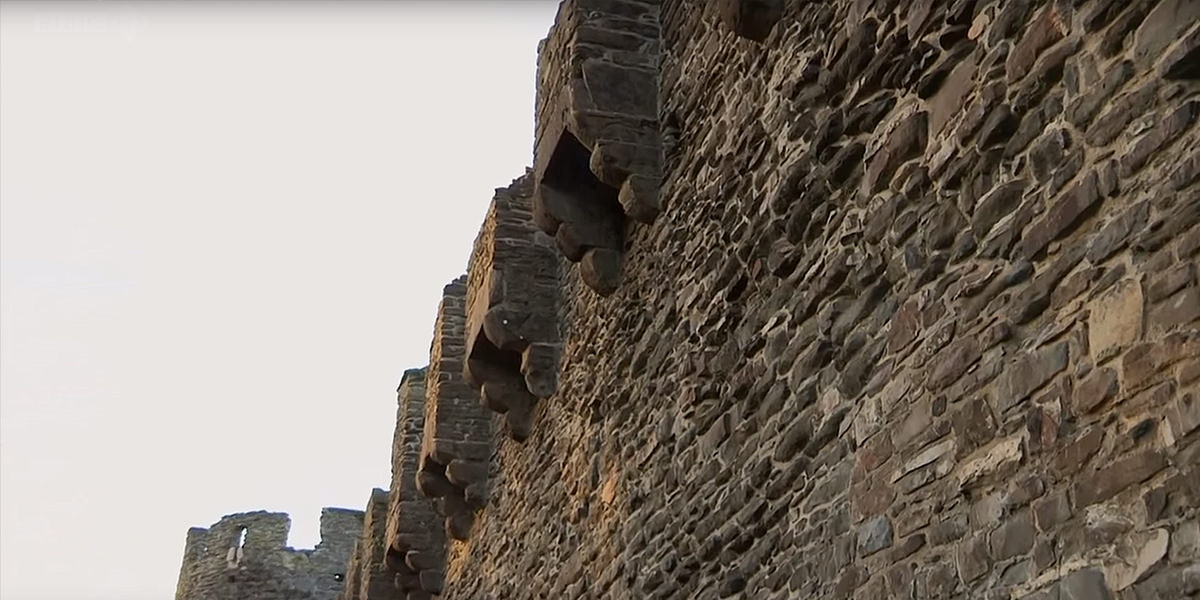 Sir John Harrington, described the sorry state of affairs as, "Sitting on the draft. Menials or gongfermors were made to scrape and carry the waste away from the town, working mostly by night. As seen from a merchant's house in Tenby, even the more advanced toilets in Tudor times were crude and smelly. From the excavations of these pits, there was evidence of widespread use of wool to wipe. The wool was dyed with madder and woad, both known for medicinal properties for soothing sore bottoms. 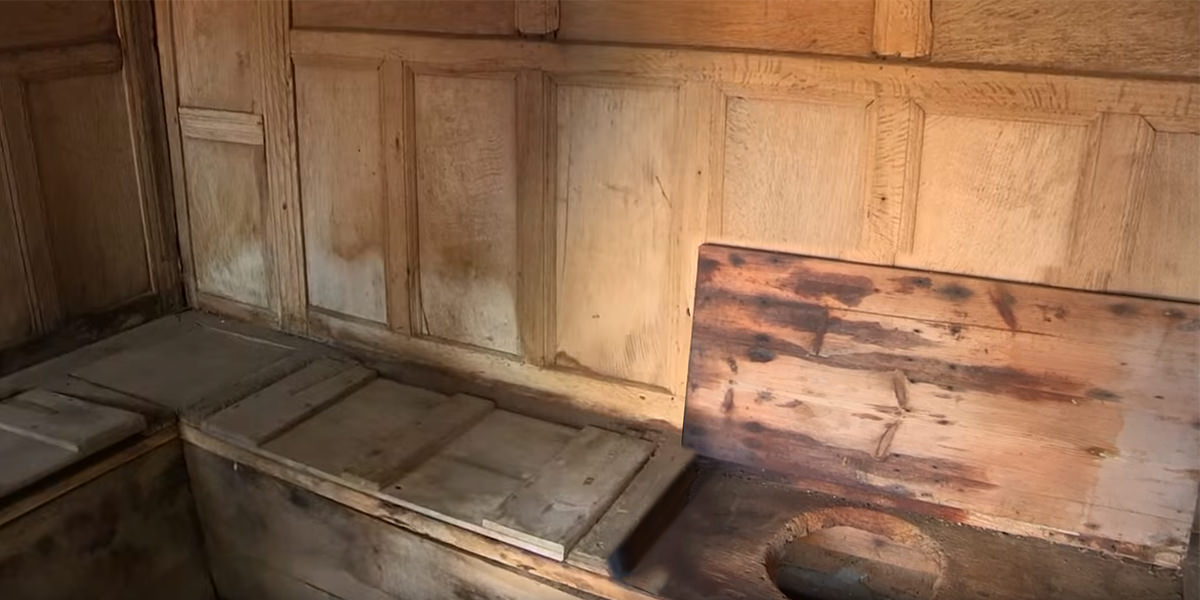 By the middle of the 15th century, accounts of the toilets were made by John Russell in his Book of Nature. Here he clearly mentioned that the plain hard boards were replaced by cushioned versions for aristocratic households and those that could manage it had a river running under the outhouse to wash away the waste. Probably inspired by this arrangement, once again the thought took shape to create piping systems to bring water inside homes. The idea of the flushing toilet also took shape.

John Harington built the first water closet for his godmother; Queen Elizabeth I. Its design included a water storage tank. The toilet was provided with 2 rods; after completing your business, you lifted one rod that enabled water to flow from the tank into the toilet bowl. The other rod activated a mechanism to allow the movement of the bowl contents to a cesspit below. But his design didn’t seem to be accepted because of the high cost and as it needed a generous amount of water which was a luxury for most homes back then. 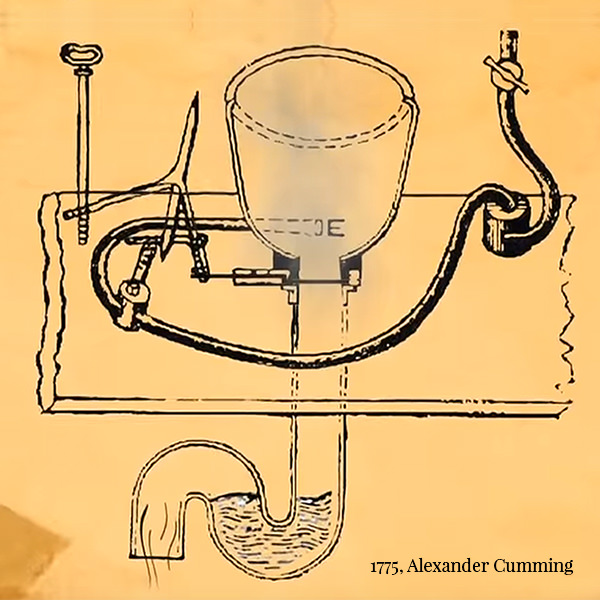 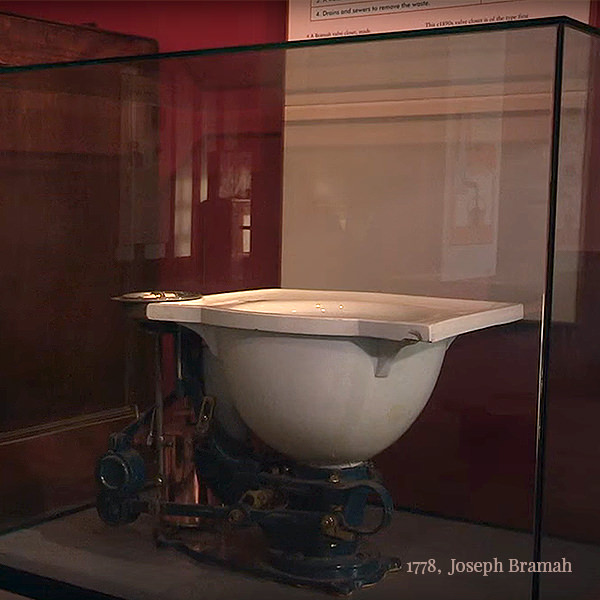 In the year 1775, Alexander Cumming, a Scottish watchmaker, became the first Englishman to patent a design of the flush toilet. The design featured an S-bend not attached to the main toilet unit with a sliding valve that enabled the emptying of bowl contents. However, the sliding mechanism sometimes drew the excreta back into the bowl, creating a smelly mess. In 1778 Joseph Bramah improvised the Cumming’s invention using self-cleaning hinged valves instead of a sliding mechanism. Using gravity to advantage, the design helps the excreta fall away. A small amount of water continuously flowed into the bowl and kept the smell away. Bramah toilets soon became popular amongst the wealthy upper classes. Soon enough the Thames was choked to the brim with sewage which was being dumped into the river. The further unscrupulous dumping of raw faeces into the Thames and other rivers in London needed to be contained and this gave shape to London’s sewage system, an engineering feat by Joseph Bazalgette. 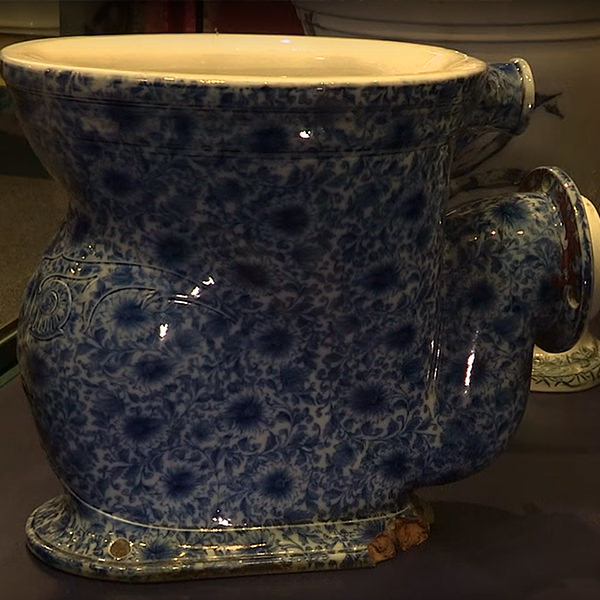 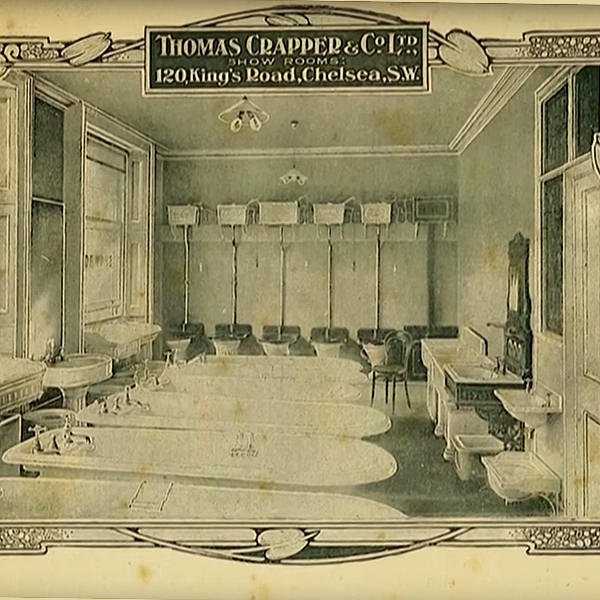 Over the next few years, the toilet and its design underwent many changes and prominent innovators amongst these were the likes of Thomas Twyford and George Jennings who strived for a well priced, mass produced and efficient toilet. By 1880, toilets were being made for the common people and came with the S-bend and a singular pedestal made of ceramic to keep smells and leaks at bay. The model was called Unitas and is the forerunner to the modern toilet. Another man deeply involved in all things “toilet” was Thomas Crapper. His name featured on the WC’s and Bowls made by manufacturers, and thus Thomas Crapper and the Crapper toilet gained popularity. 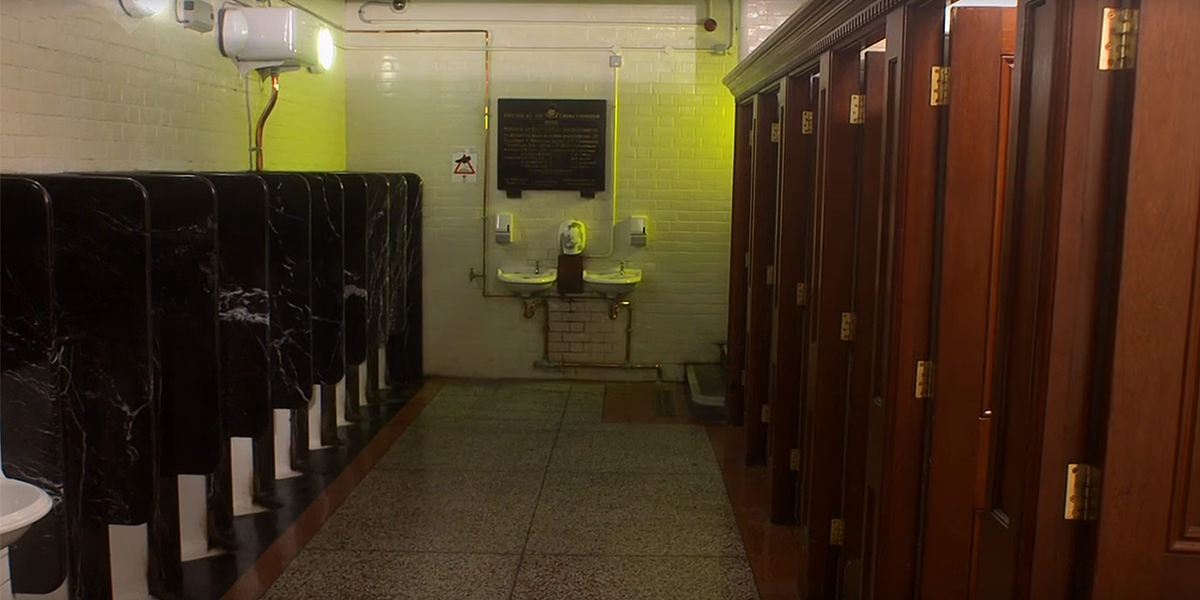 First public toilets made an appearance in London in the year 1851. Users had to pay a penny to use these urinals. Many working-class households also had shared toilets unlike the luxurious private ones enjoyed by the upper class. 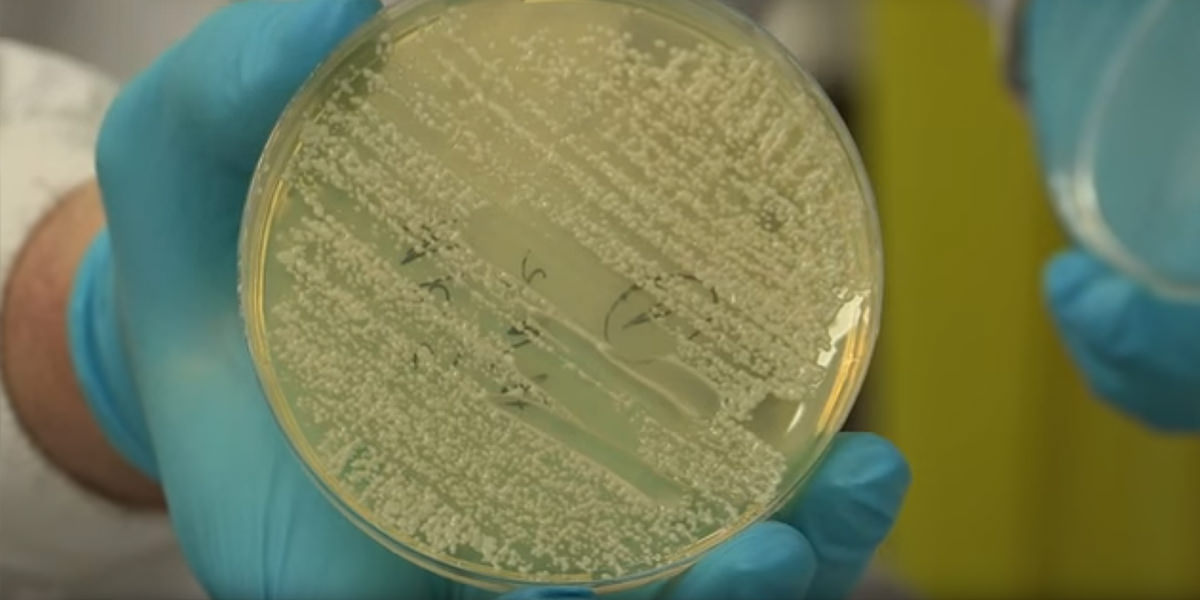 Apart from the transformation of the toilets, there is another pressing question post use. It is better to wipe or wash. Using water may be a greener alternative because toilet paper means felling of trees with the wet varieties quickly adding to the landfills. While many religious beliefs also discourage the use of toilet paper, it is largely a matter of choice. Another area of discussion is sitting versus squatting in the loo. Both the sitting-type and the squat toilets have their own advantages and disadvantages. While sitting on the seat may be less hygienic, it offers superior comfort levels, and this is the preferred modern-day toilet style. 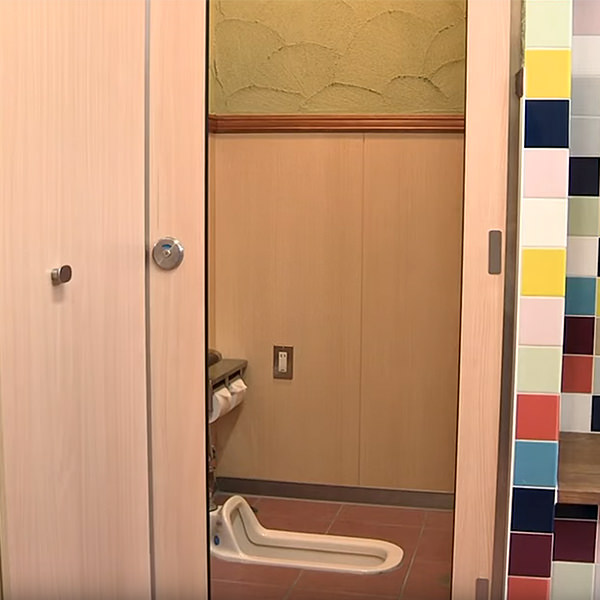 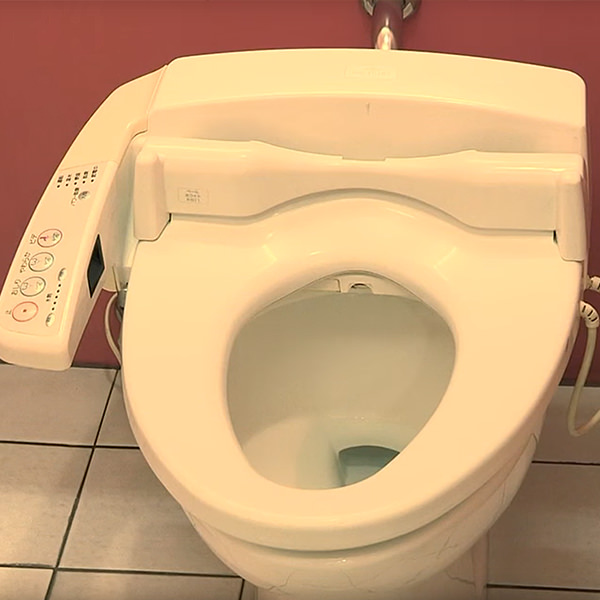 Even culturally rooted countries like Japan are transforming their squat toilets into sitting down models. Modern day Japanese toilets are some of the most technically advanced and hygienic you will see anywhere in the world. Some of them showcase heated seats, sensors for controlled flow, temperature, music and every possibility that you can imagine. Japanese lay a high price on calmness, tranquillity and beauty. The aesthetics and beauty of Japanese architecture extends to their toilets as well. These also have a Sound Princess, a type of sound effect installed in the loo to mask the sound of their own bodily functions. This is symbolic of the kind of privacy users seek when visiting the toilets. 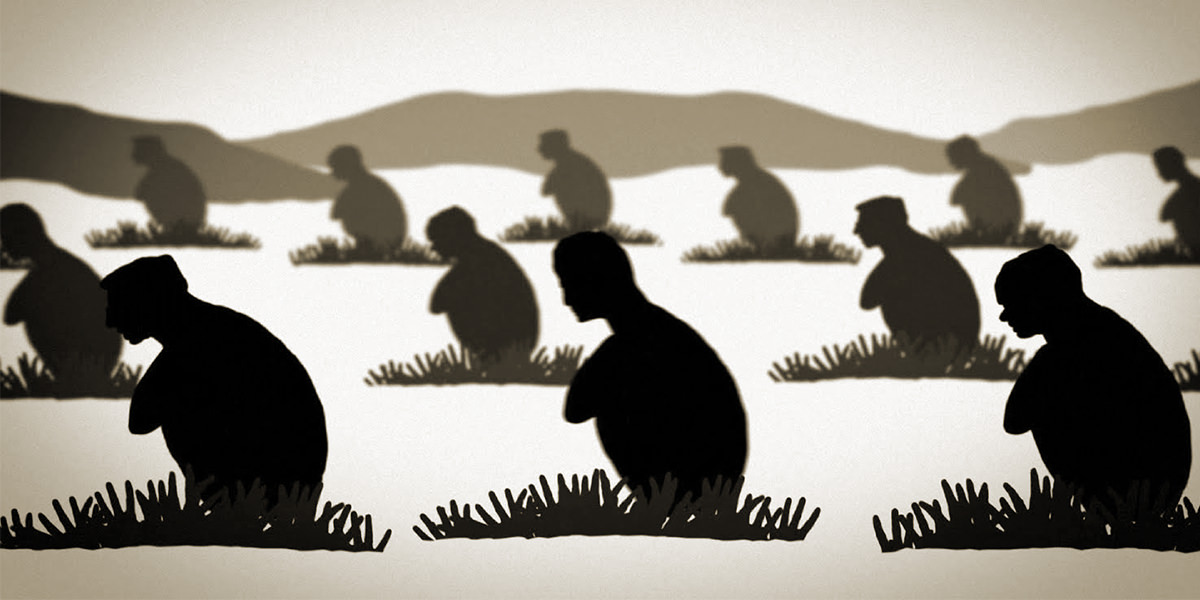 It is ironical that on the one hand there are these Japanese technological masterpieces and on the other hand, many people in neighbouring China and India do not have access to even basic sanitation facilities. 40% of the world population still practices open defecation, suffering the consequences such as polluted food, water and loss of life due to diseases. Many projects and schemes have been launched by charitable trusts, governments and NGO’s to tackle this problem. In Bangladesh “The Wash Programme” aims to furnish 40 million homes with toilets. The scheme works by providing the basic hardware for building a toilet facility at a nominal price. This is supplemented by awareness programmes which drive the people to change their age-old habits and visit the toilet instead of shitting by the road.

While countries like Bangladesh grapple with the basic sanitation problems, elsewhere efforts are on to revolutionize the toilet and its use. At Delft University in Holland, scientists are working on creating a machine that will atomise the waste and the gases produced will generate electricity. They hope that such a reaction will be possible within the toilet itself without the use of water. So as you poop, so you generate instant energy. This would be the future of toilet that we may encounter and use shortly!