Having experienced the upsides and downsides of using Public toilets at different destinations, we have put together a toilet guide which every traveller can use. The guide includes an Interactive Map, which can help you identify the local names for the Toilet, along with Public Toilet Charges. Toilets in few countries may be free in shopping malls, food chains or in a particular city while in others they may carry a small fee for use. After extensive research, we came up with average charges and types of toilets that you may come across. All charges, values and information is approximate and may differ in different States or Counties, but it will give you a basic idea about approximate Charges and Toilet Types, along with their Local Terminology. Whether you are the quintessential travel junkie seeking out new destinations or a novice traveller on a maiden voyage, our easy to use guide will help you make the most of the “Public Toilets” across the globe. 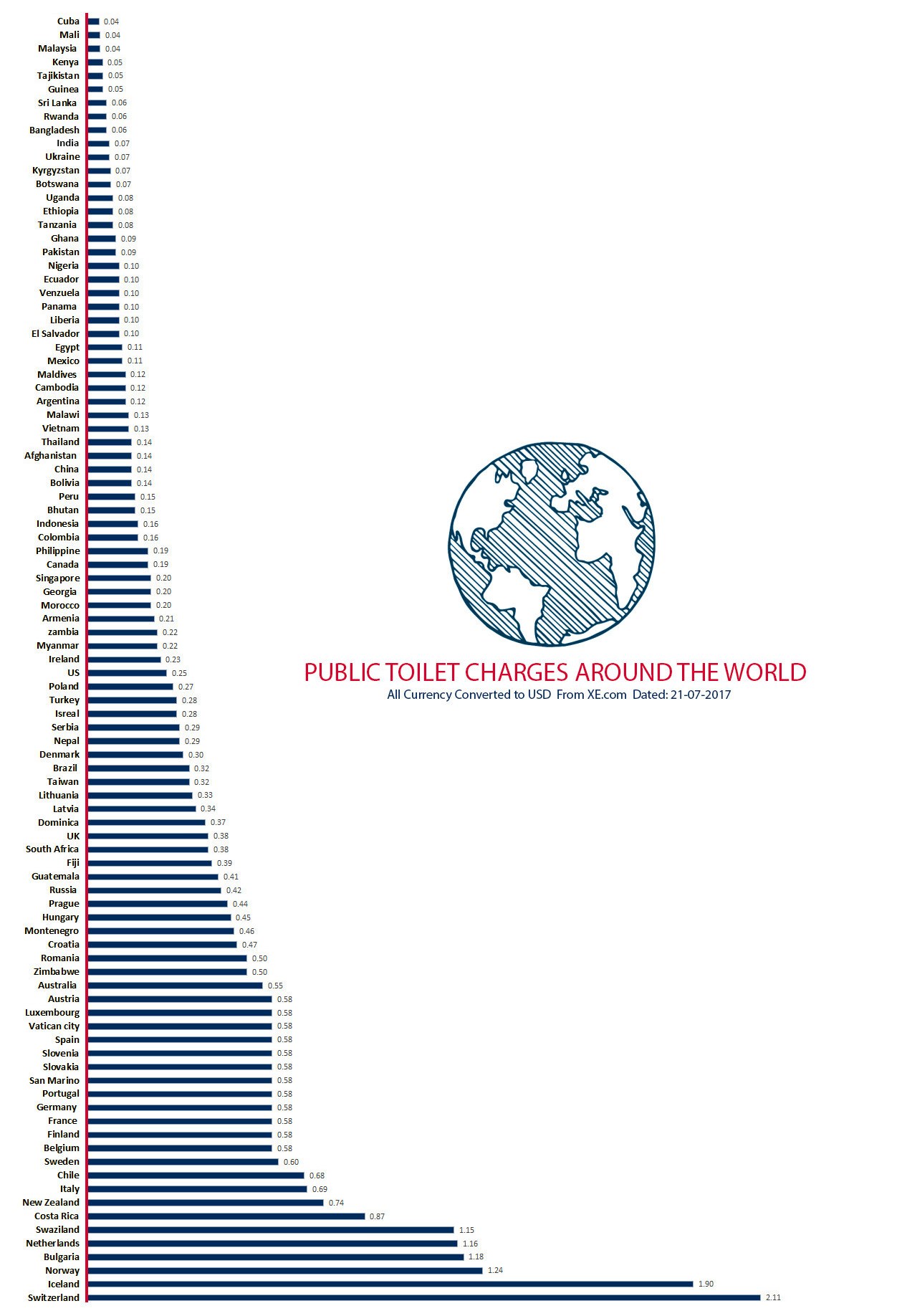 What We Found out About Open Defecation 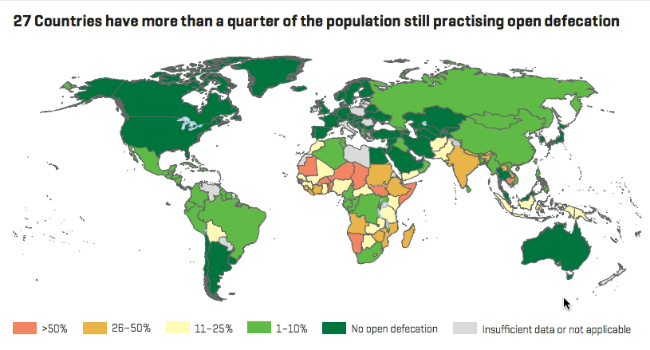 Open defecation or defecating outside a designated toilet in an open area is common in developing countries the world over. The problem has reached crisis proportions and causes many hygiene issues amongst the morevulnerable sections of society like infants and children. Following extensive research, we have found that countries with the lowest charges for public toilet facilities have the highest proportion of populations defecting in the open. This is contrary to popular thinking and true for the poorest countries in Africa, South America and Asia.

The reasons for this can be many, the foremost being a genuine lack of public sanitation facilities. Most people are so poor that they are unable to build toilets in their homes or even a common toilet facility, let alone a public toilet. Most people are left with no option but to use open fields, rivers and trenches.

Those who do have access to public toilets, either can’t afford to pay the very nominal charges or refuse to use these because of they are ill maintained and dirty. Data shows that within these countries, numbers in rural and backward areas are dramatically high because of infrastructure issues, inaccessibility and lack of sanitary awareness. The minority who are able to afford to pay and use toilets, refuse to do so due to prevailing mindsets and for want of awareness of the dangers of cross contamination.

In this short Video Blaine from Cut.com travelled around the world to capture footage of public restrooms. - Source

A well-maintained public toilet is a facility that can make all the difference to a travel destination. Insanitary conditions, non-functional, broken toilets can ruin the holiday mood faster than saying the word “loo.” Although some public toilets are free, many charge a nominal fee, mainly for the upkeep of the toilets and to facilitate toilet attendant salaries. Some of us may frown upon the idea of paying to use the toilet; however, this certainly is not a new concept. The pay toilet can be traced back almost 2000 years, to the first century AD. In the late 19th century, John Nevil Maskelyne, an English magician, invented the first modern pay toilet. Even in ancient world, there are historical accounts of pay toilets in ancient Rome in 74 AD. The first pay toilets in North America were installed by Walt Disney at the studio’s popular cafe on Hollywood Boulevard. Pay toilets in most countries are operated by local municipalities. However, in America, in the year 1970, people started attacking the idea and concept of paying for the use of this civic facility and pay toilets came to be banned in America.

Going to the toilet is a basic human need, and from early times, people have used different means to meet this requirement. Most of the times, we use the word, "Bathroom" to go to the restroom. The poorest Sub-Saharan and Asian Countries use a pit latrine or pit toilet where human excreta is collected in a hole dug into the ground. The collected feces is then used as compost that is further used as a fertilizer.

All across Asia, Middle-east and Africa, the squat toilets are commonly used although new and upmarket facilities now have Sitting style WC’s. Even in Eastern Europe, Italy and Germany, squat toilets were in use, until their use became redundant with the advent of the comfortable, Sitting style toilets.

When you have to go, you have to go, and at that point, most travelers willingly shell out the dime or dollar required for using the toilet. Usually, if you need toilet paper, you may need to pay extra in the form of loose change. Many countries in Asia, South and Central America, and Africa have outdated sewage systems that do not support flushing down toilet paper. Avoid clogging the loos by putting the toilet paper in bins that are usually provided. It is always prudent to carry your own toilet paper, largely everywhere, with the exception of the US or West Europe.

For Corrections: Please Email to kylie@qssupplies.co.uk