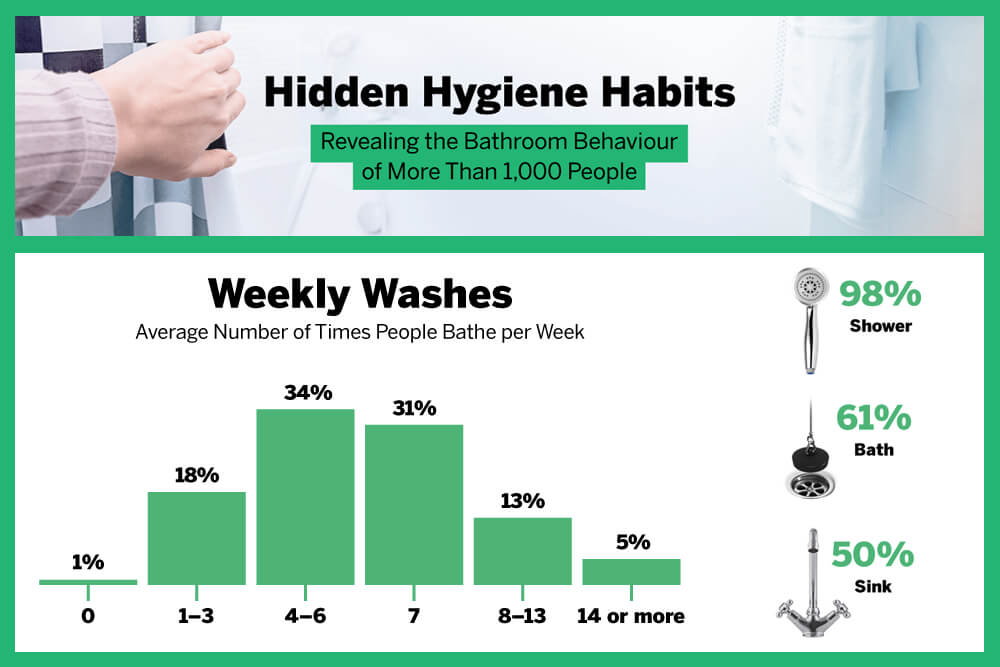 We all visit the bathroom on a daily basis, and yet some still wonder what one another gets up to behind closed bathroom doors. In the private moments of our regular hygiene routines, we can be our authentic selves in ways that others might perfectly relate to or find utterly disgusting.

We spoke to over 1,000 Brits and Americans to find out their most peculiar bathroom habits and the reasons for them. 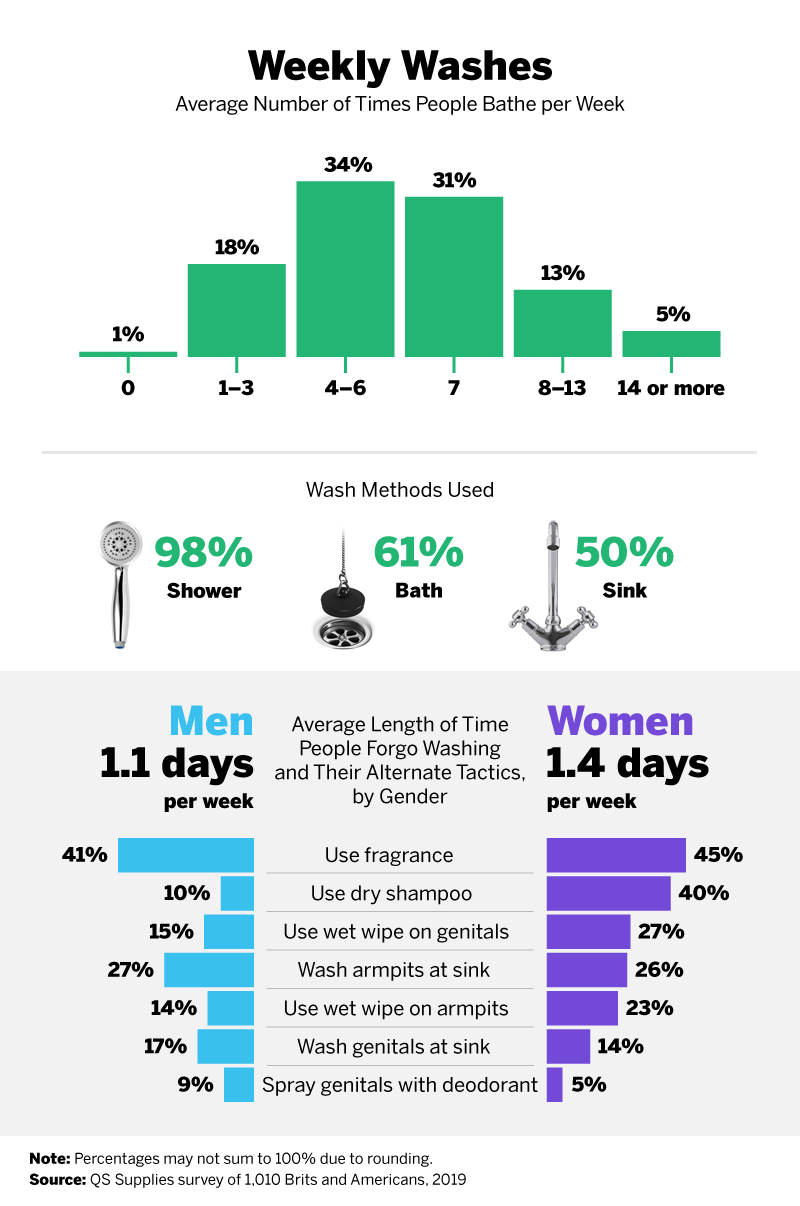 People were divided on which factor mattered most when choosing to wash: whether they smelled (47%) or the time since their last wash, regardless of how smelly they'd gotten (53%). The difference in priority separates the reactive from proactive washers. Clearly, not everyone makes a habit of washing their bodies every day. So how often do people wash?

1 in 10 washed at least 10 times a week, either in the shower, bath, or at the bathroom sink, while 1 in 20 washed 14 times or more - that's at least twice a day, every day. However, most people (53%) washed fewer than seven times during the typical week, meaning they regularly went 24 hours without washing.

Some described the freshening-up tactics they used to avoid getting smelly on days they don't wash. Most common was the "cover up," a spray of fragrance to mask unwanted smells (45% of women vs. 41% of men). 1 in 10 men and 1 in 20 women opted for a more targeted spray, admitting they spritz their genitals with fragrance. Others tackle the same problem area but with some effort to actually clean: 27% of women and 15% of men said they apply a wet wipe to their smelly groin, and roughly 15% of men and women spruced their particulars at the sink instead of committing to a full-body wash. One in 4 said they gave their armpits the same treatment.

In this modern world, many of us try to shave spare minutes off our busy daily routines. So much so that 47% of people we spoke to said they often skip washing because they "don't have time." So, when they went to the trouble of having a proper shower, many chose to make the most of it and multitasked while they did. 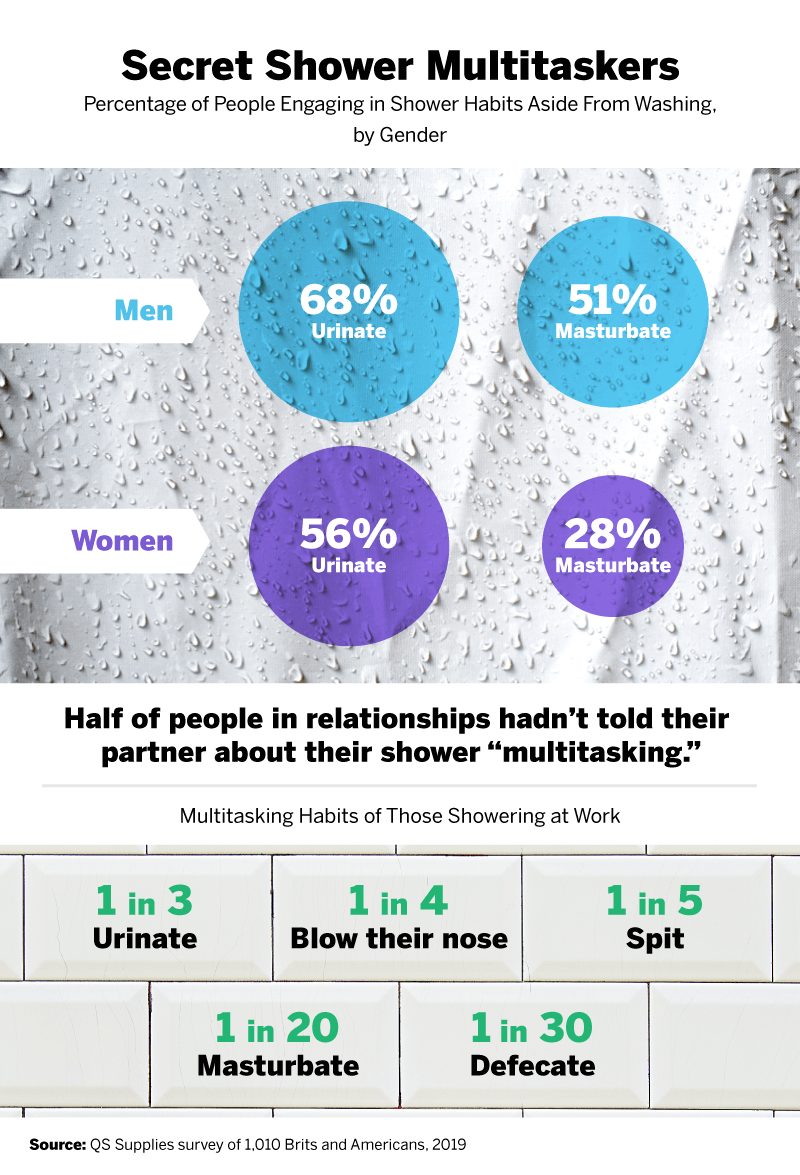 One form of bathroom multitasking is an especially common topic of debate: urinating in the shower – is it acceptable? According to public consensus, it turns out yes. Sixty-eight percent of men and 56% of women confessed to us that they've tinkled underneath the shower sprinkle. Perhaps seizing the opportunity for an easy cleanup operation, 51% of men and 28% of women also said they've masturbated in the shower. Other ways they made a mess while getting clean were blowing noses (47%) or spitting (44%) in the shower.

There may be a stigma about shower multitasking because nearly half (48%) of people in relationships aren't privy to what their partners get up to behind the bathroom door – men and women were equally likely to keep their multitasking secret. Although, as we'll see, the extent to which couples share bathroom activities is a clear dividing line between relationships.

Couples who bathe together tend to rate their relationship as healthier 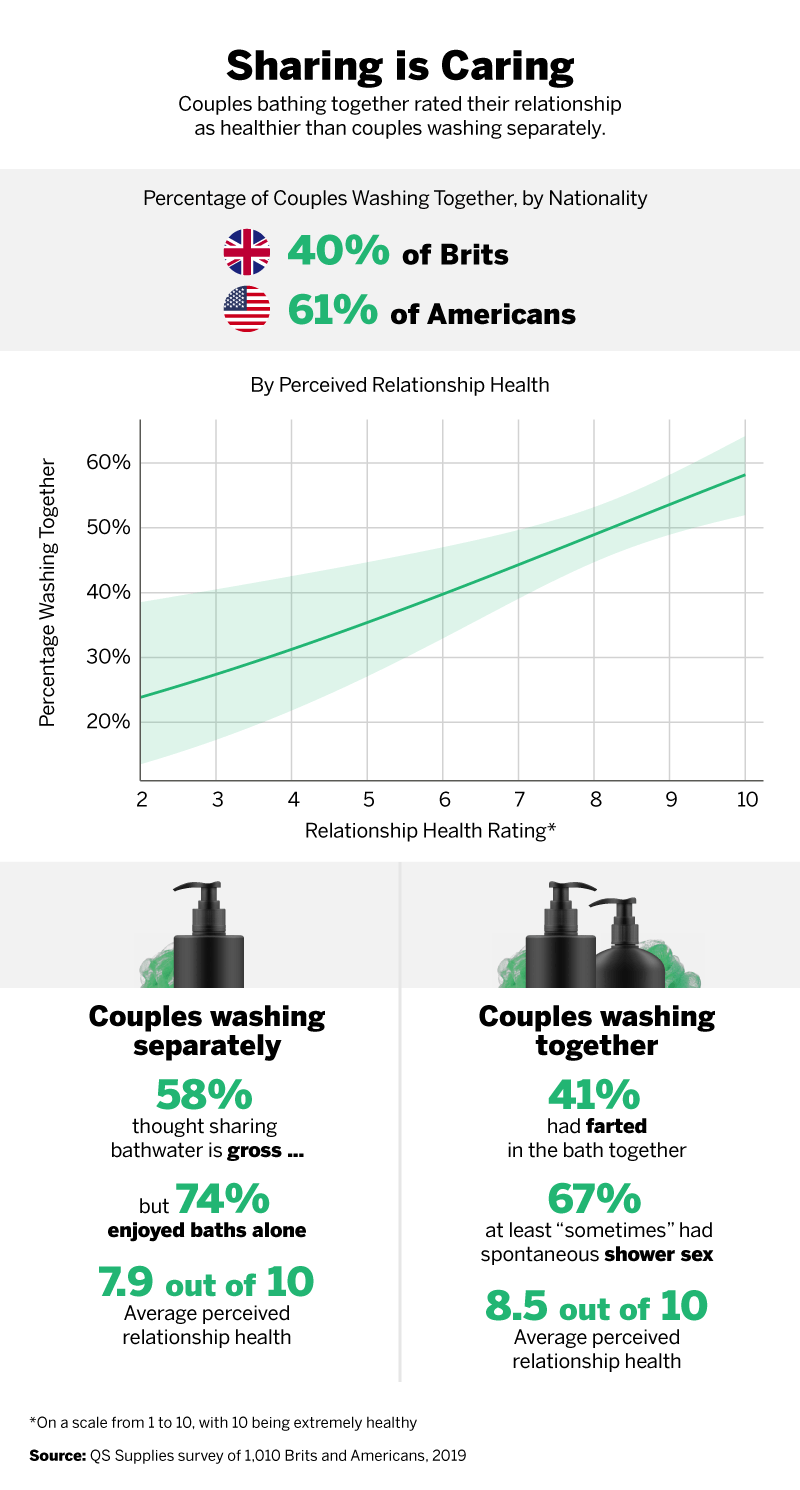 Half of the people in relationships we spoke to said they enjoy washing with their partner, the other half did not (61% of Americans vs. 40% of Brits). Both camps have compelling reasons.

Four in 10 couples who shared baths said they and their partner had both farted while in the bath together, which is probably one of the reasons why the majority (58%) of couples who don't share baths think that steeping yourself in another person's bathwater is gross. However, it's not that people don't enjoy baths of their own; in fact, 74% reported enjoying personal tub time. But, for some, sharing each other's ablutions and dirty water was a step too far.

Couples who washed together seemed to take a more warts-and-all approach to each others' bodies. Many couples seemed to use shared showers as an opportunity for intimacy. Two-thirds of couples who showered together said it often ended with them having love in the heat of the moment.

The chance of shared showers getting extra steamy might be why people who wash with their partner also rated their relationship as healthier, on average. There are many factors affecting how healthy someone rates their relationship. Unhappy couples are unlikely to fancy jumping in the tub and staring at each other face to face, while couples who don't have time for shared washing may have a less healthy relationship for unrelated reasons. 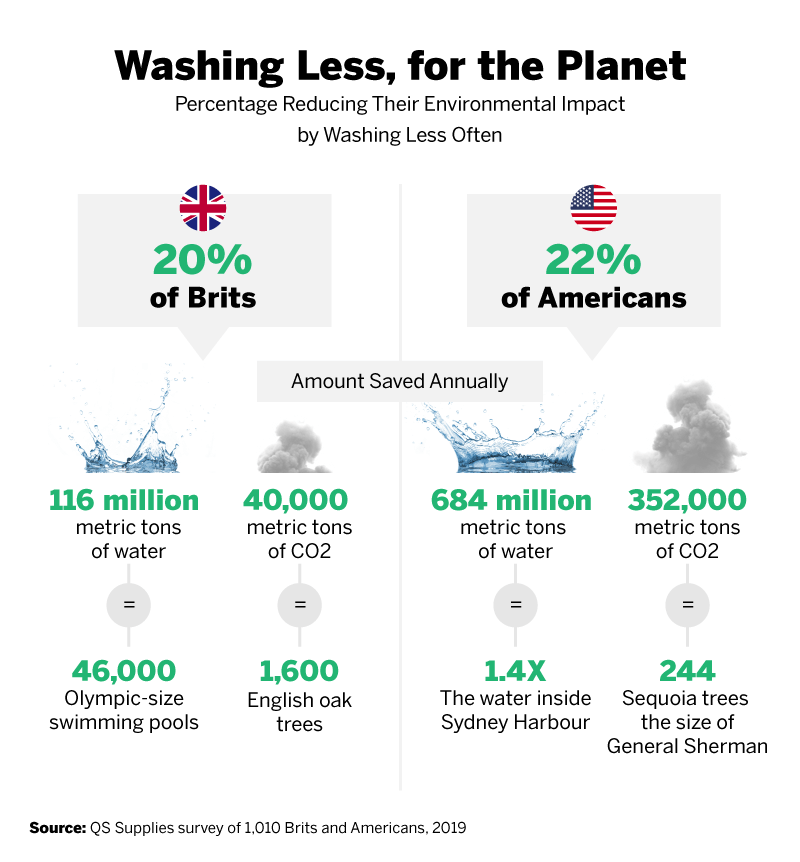 Environmental concerns have steadily gained political support over the past decade and more, on both sides of the Atlantic. In many local authority and municipal government areas, supplying safe drinking water consumes more energy than any other public service. Not to mention the increasingly frequent water shortages that occur (yes, even in rainy UK). So, cutting the amount of water you use at home can make a difference.

One in 5 Brits (20%) and Americans (22%) told us they are actively washing less frequently than they otherwise would to help reduce their environmental impact. These people claimed if it weren't for their environmentally friendly efforts, they would shower three times more per week, on average, and one of their weekly showers would be a bath instead.

Taking the average amount of water used during one shower and bath, we calculated each person's weekly water saving as a result of their choices to take fewer showers and opt for showers over baths. We added up everyone's savings to estimate the total annual water saving in each country, by extrapolating our survey results to 20% of the adult population (20% being the proportion who said they chose to save water by washing less frequently).

All that saved water means energy savings, too, by reducing the amount passing through water treatment plants and the supply network. Taking CO2-equivalent greenhouse gas emissions per cubic metre of supplied water in each country, from the UK government's and Environmental Protection Agency's calculations, we estimated how much greenhouse gas was prevented from entering the atmosphere due to these people's green efforts.

Fifty-four percent of people we spoke to said they believe it's necessary to wash daily, despite the majority not living up to that standard and most dermatologists advising that daily showers aren't needed. Our bathing habits are more than purely logical choices made to stay hygienic. Instead, they can reveal secrets about who we are, what we care about, and even what our relationships are like.

What's clear is that your bathing habits are unlikely to endanger anyone's health, even if other people find them gross – that is, unless your habits are particularly unusual. Just avoid being the 1 in 30 people that have pooped in the work shower, and you should be fine.

The QS Supplies research team surveyed 1,010 Britons and Americans in November of 2019 (505 people from each country). Respondents ranged in age from 18 to 81 with a median age of 32 and with equal representation of men and women. Results about couples were based on 617 respondents who were in a relationship.

Our results are based on survey responses and, are therefore, subject to self-reporting bias. Results about the significance of shared washing in benefitting relationship health were established by fitting linear models and proportional odds logistic regression to the data and conducting likelihood ratio tests on nested models with and without shared washing as an explanatory variable. The significant effect was robust to different assumptions of the two models. Results about cumulative water and energy savings are calculated by combining survey results with external facts from governmental data and other expert sources – therefore making our estimates subject to the accuracy of those external facts.

The following note pertains to the Washing Less, for the Planet visual:

We asked people how many more times they would shower, or have a bath instead of shower, if they weren't trying to reduce their environmental impact, and summed the average water and energy saved by the proportion of national adult populations in 2018 that said their environmental impact is one of their reasons for wanting to prolong the time between washes; shower and bath water usage estimates from Energy Saving Trust's At Home With Water report; CO2-equivalent energy cost of supplying required water in the UK from the government's Greenhouse Gas Reporting Conversion Factors 2019 and in USA from EPA Pollution Prevention Program's GHG Calculator; CO2 sequestered by English Oak from wood-database.com/english-oak/ and by General Sherman Sequoia from dewharvest.com/carbon-dioxide-stored-by-general-sherman-giant-sequoia.html.

Feel free to share our insights and images for any noncommercial purposes. But please do link to this page to give readers full access to the research and credit the QS Supplies research team for their work.