Happy homes can turn into war zones because of a partner’s bad bathroom habits. Leaving the toilet seat up, forgetting to replace the loo roll, hair clogging the drain – classic cases of bad bathroom behaviour that can drive people crazy.

We all go to the bathroom, but we don’t all share bathroom etiquette. So we asked 1,028 Brits and Americans about the bathroom etiquette they expect of partners at home and strangers in public, as well as the worst sights, smells and sounds they’ve experienced in the sordid world of public bathrooms.

His and her worst bathroom habits 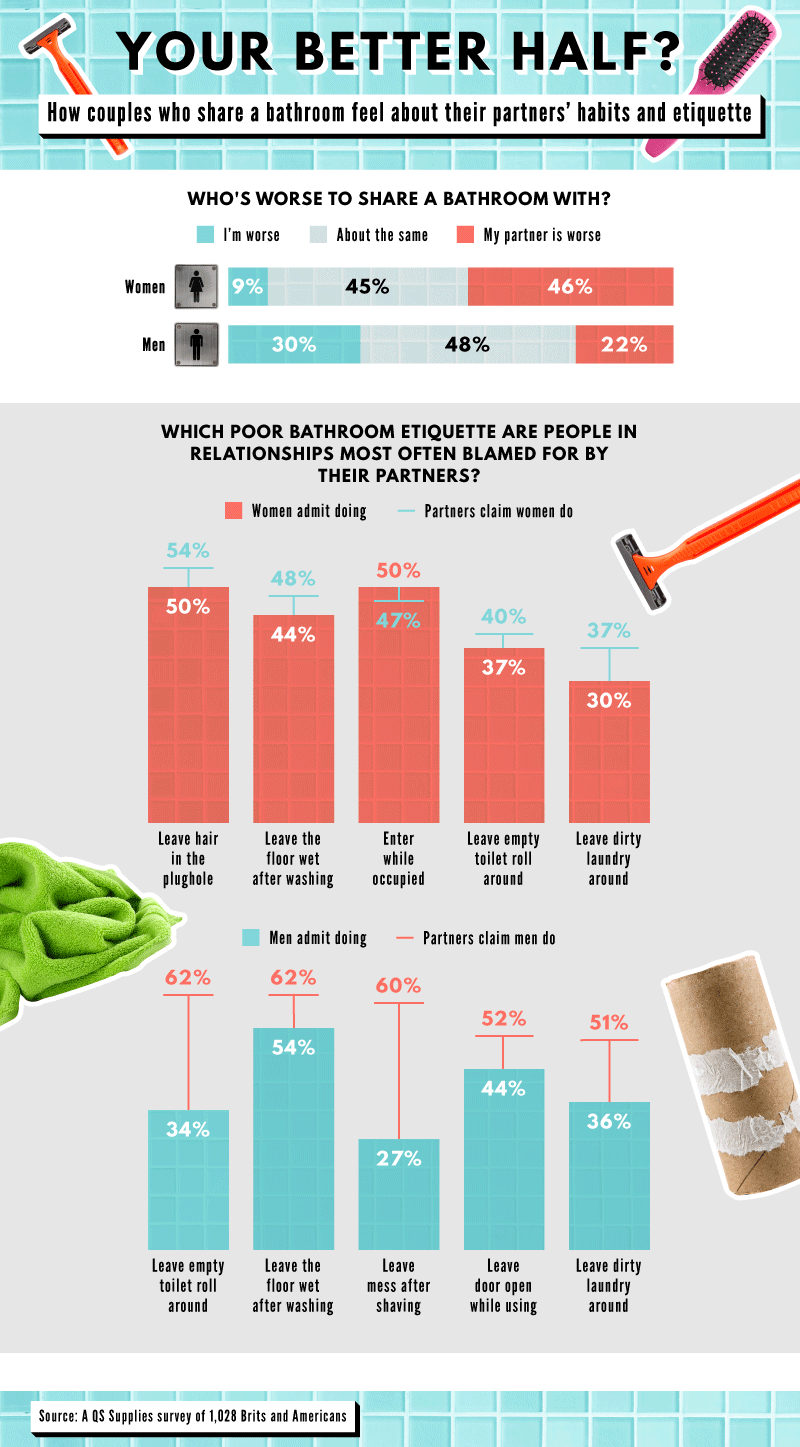 Sharing a bathroom can be challenging – the bathroom is the room most likely to cause an argument. But are men or women worse, and which bad bathroom habits are driving partners around the U-bend?

Women were twice as likely as men to say their partner’s bathroom etiquette is worse than their own (46% vs. 22%). Similarly, men were three times more likely to concede they’re worse to share a bathroom with than their partner (30% vs.9%). But are guys really that gross, and are girls getting off lightly?

Leaving hair in the plughole was the most common bad habit for women to be accused of, and exactly half admitted to doing it. Women weren't accused of bad bathroom behaviour as often as men, but when we asked them to own up to their bad habits, we found they were largely in line with their partners' perceptions.

Meanwhile, men bore the brunt of the blame for bad bathroom habits, but it didn’t match up with what they admit doing. Perhaps they don’t want to own up to their bad habits, or they don’t realise they have bad habits in the first place. Whatever the reason, toilet rolls are a particularly touchy subject. Nearly two-thirds of men’s partners claimed they leave empty toilet rolls lying around, yet only a third of men admitted to it.

The harsh reality of sharing a bathroom is that of all the people we spoke to, 99% of men and women admitted to having at least one bad bathroom habit.

Putting up with a partner’s pet peeves is part of being in a relationship. But sharing bathrooms with complete strangers is a different story.

Most women feel uncomfortable in a unisex bathroom 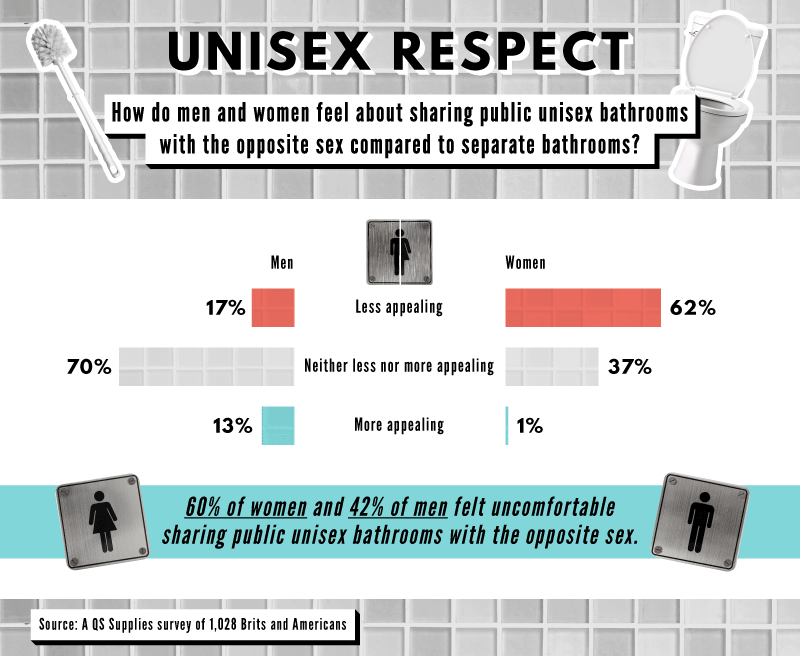 Unisex bathrooms are becoming increasingly common, as they help to break down gender binary in public spaces. But our research shows that not everyone is keen on the idea. Sixty percent of women and 42% of men we asked felt uncomfortable sharing a public bathroom with members of the opposite sex.

Again, men’s bad reputation for poor bathroom etiquette is a big reason for this. Sixty-two percent of women found unisex toilets less appealing because of the way the opposite sex uses public bathrooms. On the flip side, 13% of men found the idea of sharing a bathroom appealing, and half admitted they’d make more of an effort to be cleaner in a unisex public bathroom.

So is it a case of public male bathrooms being downright disgusting, or do men – maybe misguidedly – think that women’s bathrooms are as clean as a whistle? Perhaps the low support for unisex bathrooms is because men and women agree that navigating the unwritten rules of their own bathrooms is difficult enough as it stands. 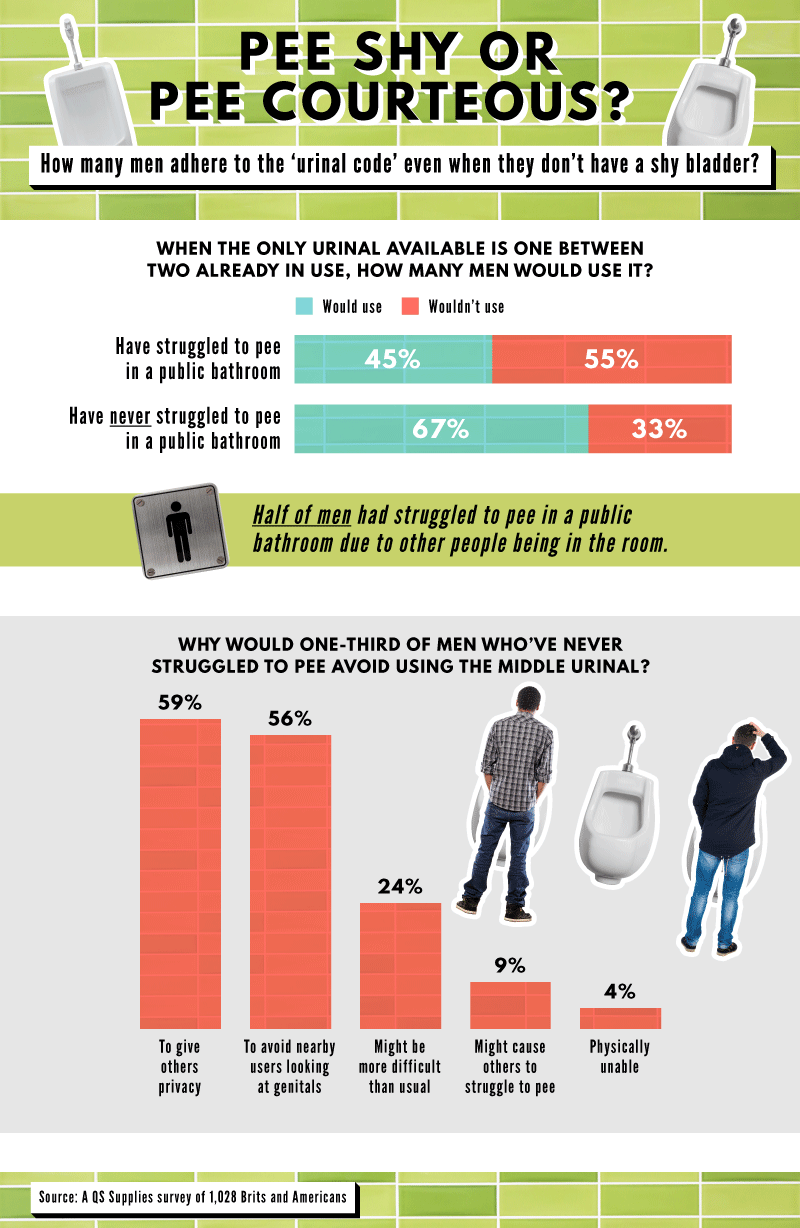 It’s a nightmare scenario for some men when visiting a public bathroom. You walk in, and the only urinal available is sandwiched between two already in use. What do you do? According to our results, 46% of men wouldn’t use the middle urinal.

'It’s the urinal code. That middle one may as well not exist' — 26-year-old American man

A big part of the decision-making process is whether someone has struggled to pee in a public bathroom before. Fifty-five percent of people who had previously suffered from stage fright opted not to put themselves in that potentially awkward situation again.

Pee shyness isn’t uncommon. Half of men had struggled to pee in a public bathroom due to other people being in the room.

Peeing is one thing. Pooping is another. Eighty percent of women and 62% of men had held back from defecating when they thought someone might hear.

Occupied cubicles can make a shy person’s blood run cold, but they aren’t the worst thing our survey takers had faced in public bathrooms. 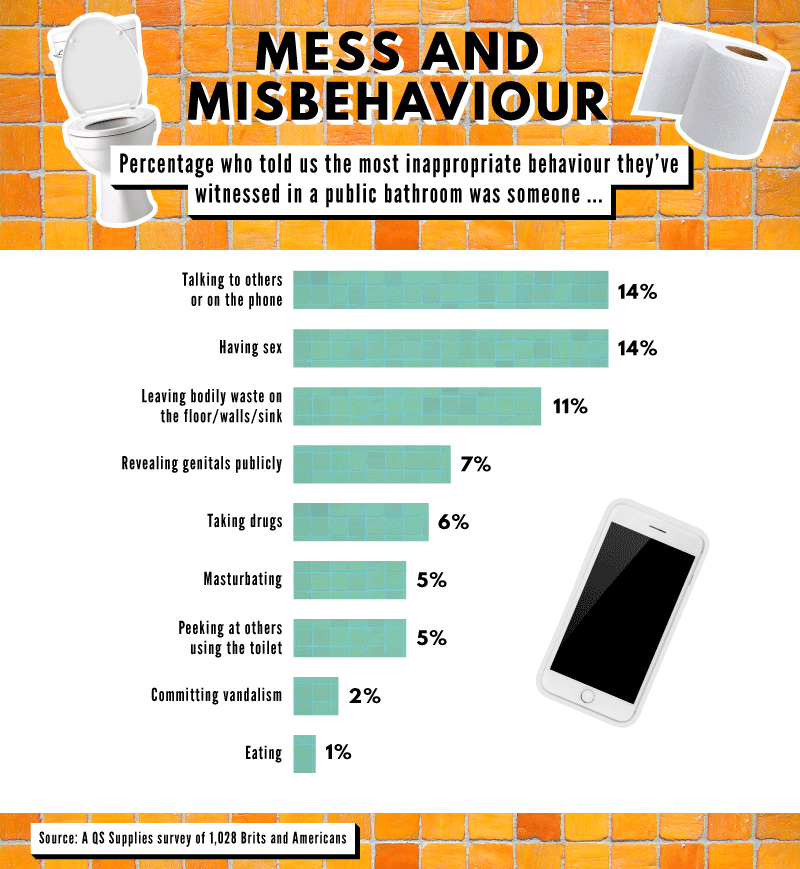 'Somebody farted at the bathroom urinals and started to motion it towards other urinal users.' — 22-year-old British man

One in 3 men admitted to leaving a mess in a public bathroom, compared to just 1 in 10 women. And of those messy men and women, 1 in 4 said they felt no guilt at all. That’s a lot of unapologetic pee, poo and blood. But even worse than bodily fluid, 14% of people told us the most inappropriate thing they’d endured in a public bathroom was a stranger talking to them or someone else. It means the bathroom faux pas people hate above all is talking. 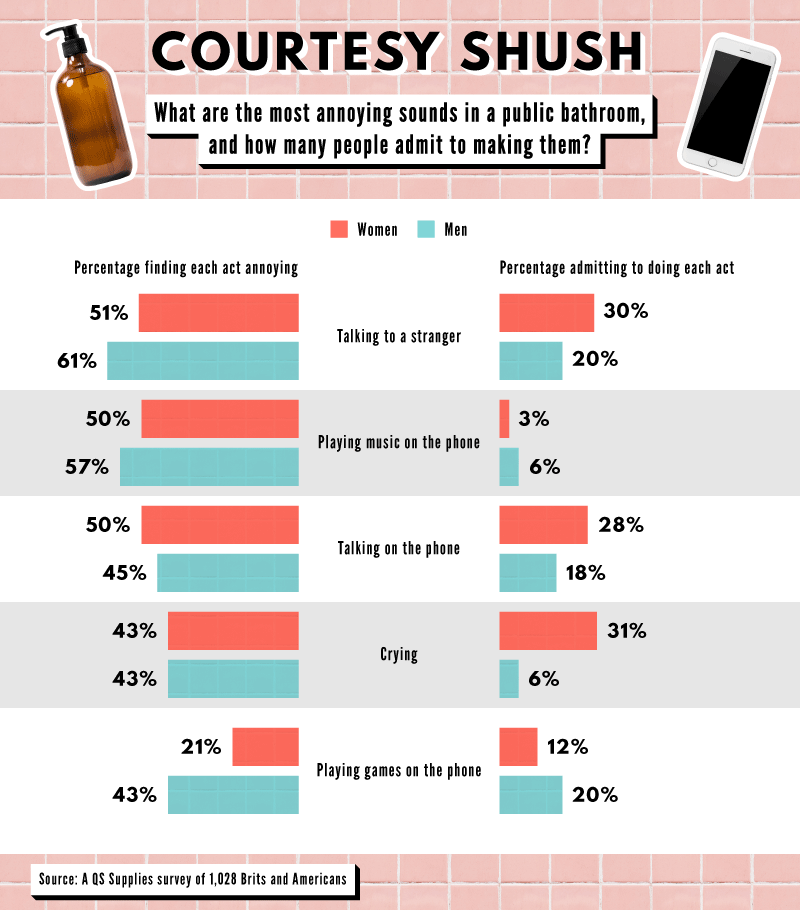 Is it too much to ask to pee or poo in peace? Networking is a big 'no' when someone has to go. Our survey takers told us that talking to a stranger is the most annoying thing you can do in a public bathroom. Eighty-eight percent of people had a stranger talk to them in a public bathroom, and the majority of them were bothered by it.

Talking tops the list of annoying sounds in public bathrooms. A close second is playing music on a phone, and there’s a huge disparity between how many people hate it and how few admit to playing their favourite tunes while doing their business. Exactly half of women and 45% of men found talking on the phone annoying, and 43% of women thought someone crying in the bathroom is annoying, despite 31% admitting they’d shed a tear on a toilet.

Bathroom talk can be taboo. But toilets themselves aren’t gross. In fact, some studies suggest toilet seats are among the cleanest items in the house. Our survey reveals it’s the people using them who aren’t squeaky clean.

Ninety-nine percent of people admitted to having a bad bathroom habit at home, and 1 in 3 men admitted to leaving a mess in a public bathroom, compared to just 1 in 10 women. Is it any wonder women feel uncomfortable sharing unisex bathrooms?

Our research reveals the most annoying things you can do in bathrooms. All things considered, good toilet etiquette is all about respecting other people’s space and privacy.

At home, put empty toilet rolls in the bin, and don’t leave hair clogging the drains. In public, pee and poo where you’re supposed to, stop playing music on your phone and, most important of all, stop talking to strangers – the toilet is neither the time nor the place!

We’d love for you to share our findings and images for noncommercial purposes. All we ask is that you link back to this page to give readers access to the full findings and credit to the QS Supplies research team.

In July of 2019, we surveyed 1,028 British and American people aged between 18 and 76 about their habits and experiences in bathrooms that were shared with others. Men and women were equally represented. The number of respondents who shared a home bathroom with their partner was 530.