Cohabitation can get complicated. When couples move in together, they enter a new stage of intimacy – and risk sacrificing their romance along the way. There's competition for closet space, differing tastes in decor and clashing standards of cleanliness. But the trickiest domain of joint domestic life may just be the bathroom.

When it comes to bodily functions and personal hygiene, just how transparent do people get with their significant others? Do most lovers feel comfortable passing gas in front of each other or helping each other with aspects of grooming? From sharing deodorant to popping each other's pimples, when does familiarity go too far?

We asked over 1,000 individuals in Europe and the US about which bathroom acts they perform in front of their partners – and which they help their partners with. We then analyzed gender differences in our results and how these "gross" grooming behaviours correlate with relationship satisfaction. Have you ever wondered how most people navigate bathroom boundaries with their partners? Keep reading to find out.

To gauge just how comfortable most couples get when it comes to grooming, we compiled a list of 20 bathroom behaviours that could be viewed as "gross." Among our respondents, nearly 9 in 10 said they or their partner had done at least one of them. In fact, on average, respondents or their partners had engaged in about five. 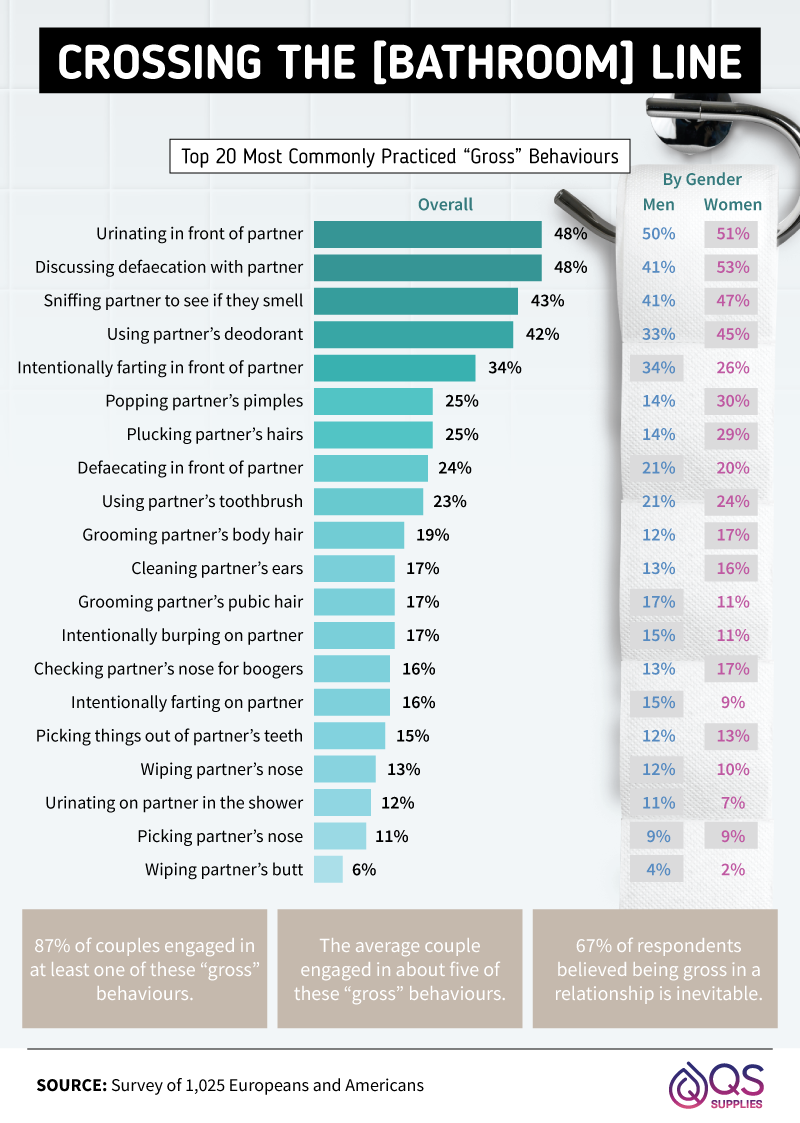 Two "gross" behaviours were most common overall: Nearly half of respondents reported that they or their partner had urinated in front of each other or discussed defaecation at some point. According to experts, comfort with transparency on bathroom matters is culturally influenced, beginning with rules established within our own upbringings. Similarly, more than a third of respondents said they or their partner had farted in the presence of the other. Couples therapists suggest that standards around flatulence are also culturally determined: Openly passing gas can be viewed as a sign of maturity and comfort or a flagrant display of disrespect.

Interestingly, women were more likely to report each of the four most common "gross" behaviours, including sniffing their partner for stench and sharing deodorant. This data point would seem to challenge some existing biological research, which indicates that women are more apt than men to feel olfactory disgust. On the other hand, men were more likely to engage in plenty of behaviours involving offensive scents, including defaecating and passing gas in front of their partner.

Regardless of gender differences, however, most respondents felt some degree of grooming intimacy was bound to occur as couples remain together. Roughly two-thirds of respondents said being "gross" is inevitable in any long-term relationship, as the need to impress fades.

If most respondents reported at least one potentially "gross" grooming behaviour in their relationships, which actions are widely viewed as beyond the pale? Conversely, which behaviours are generally seen as acceptable, or even desirable, in the context of cohabitation? 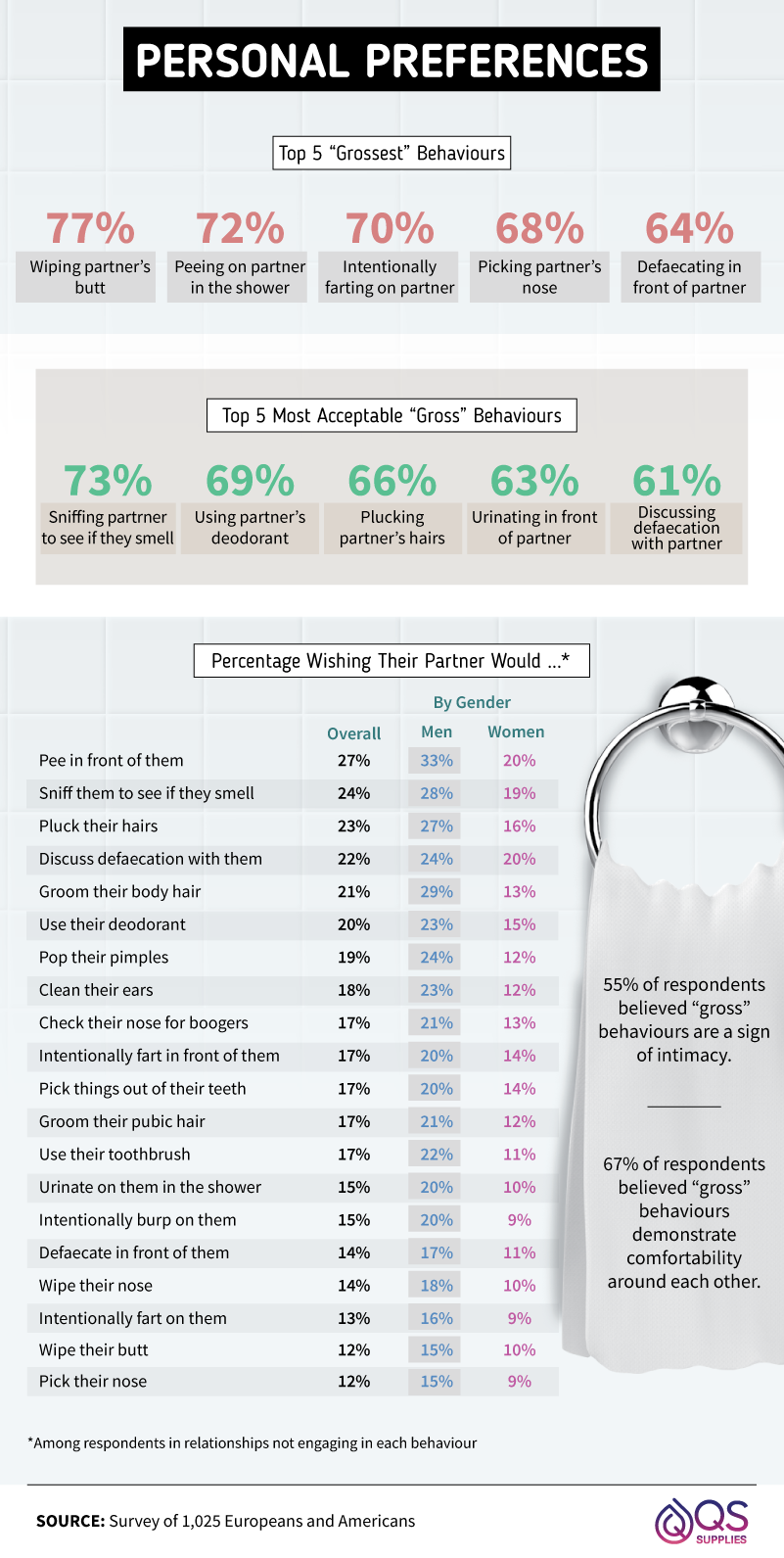 The majority of respondents felt squeamish about certain behaviours related to more vulgar bodily functions. For example, 77% felt that wiping their partner's rear end would be gross (although this kind of care can be both noble and essential if one's partner faces medical challenges). Similarly, about 7 in 10 respondents were disgusted by the prospect of urinating on their partner in the shower or intentionally farting on their significant other.

At the other end of the spectrum, most respondents felt it was acceptable to sniff a partner to see if they smelled or to use their partner's deodorant. (Heads-up for partners of different genders: Deodorants marketed to men and women are typically quite similar.) Two-thirds of the respondents felt plucking a partner's unwanted hairs was fine as well.

The Good Side of Grooming

Could collaborative grooming actually strengthen a couple's bond, increasing their trust or intimacy? Might sharing certain habits increase attraction? For many of our respondents, forgoing privacy actually seemed to increase intimacy. 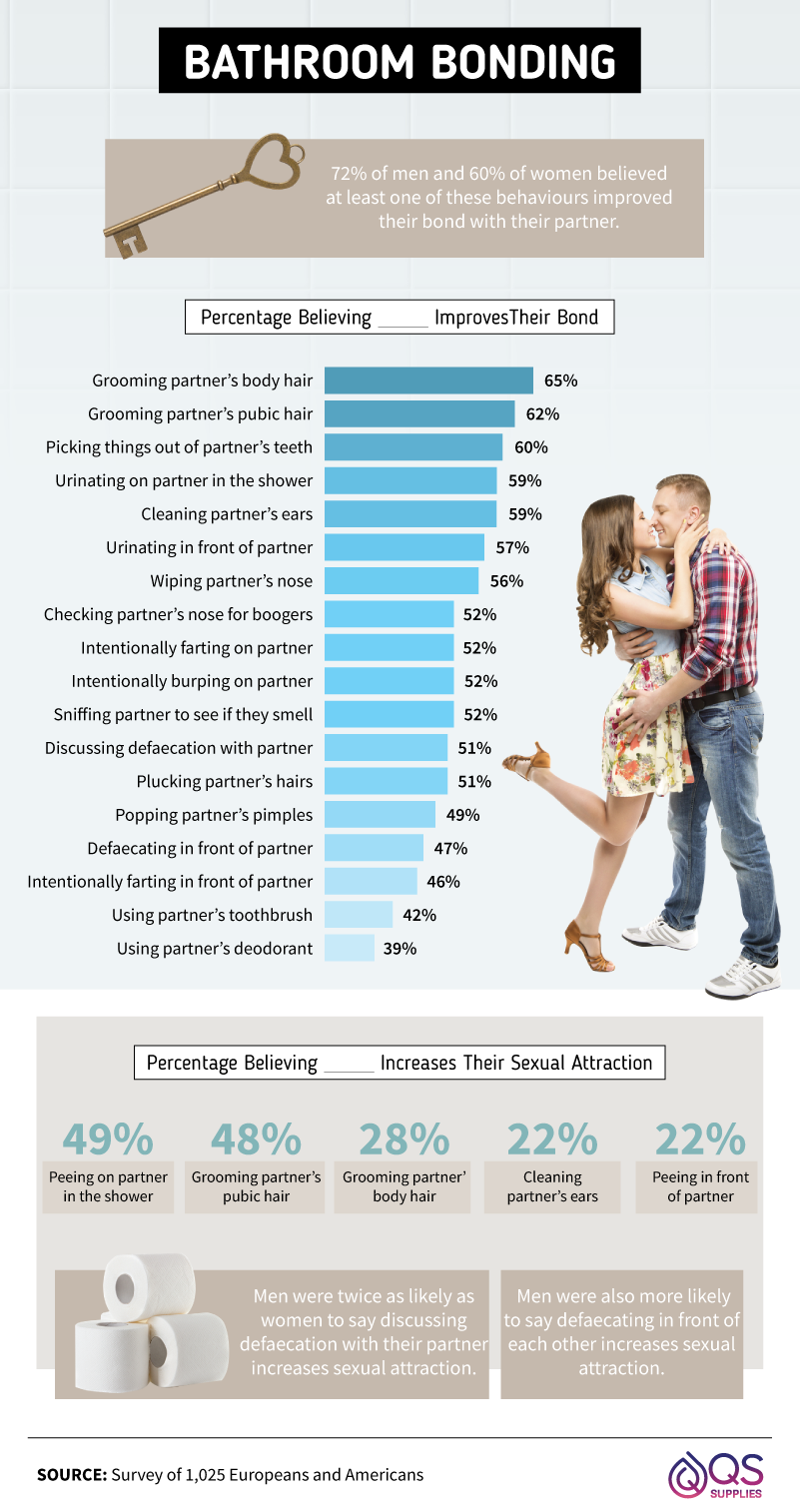 Nearly two-thirds of respondents said grooming their partner's body hair strengthened the bond between them; nearly as many said the same about grooming their lover's pubic hair. Sixty per cent felt their bond with their significant other was strengthened by picking things out of each other's teeth. Research suggests that couples who perform chores together tend to be quite happy. Perhaps these shared grooming tasks perform a similar function.

Some shared experiences seemed more sexual than functional, such as peeing on one's partner in the shower. Indeed, 49% felt this act would increase sexual attraction with one's significant other: Many couples incorporate urinating into their sex lives, and the shower may be the least messy place to do so.

On the other hand, farting and defaecating in front of one's partner seemed far less likely to improve a couple's bond or their sexual connection. Additionally, using a partner's toothbrush or deodorant didn't strike most respondents as beneficial to their relationship. Dentists would likely approve: Sharing a toothbrush could mean swapping bacteria with your partner, a form of sharing no relationship needs.

When even grooming becomes a shared experience, one might assume that romance suffers. After all, where's the mystery in total transparency? Yet, our findings indicate a very different pattern of relationship satisfaction: Among our respondents, "gross" behaviours correlated with happiness. 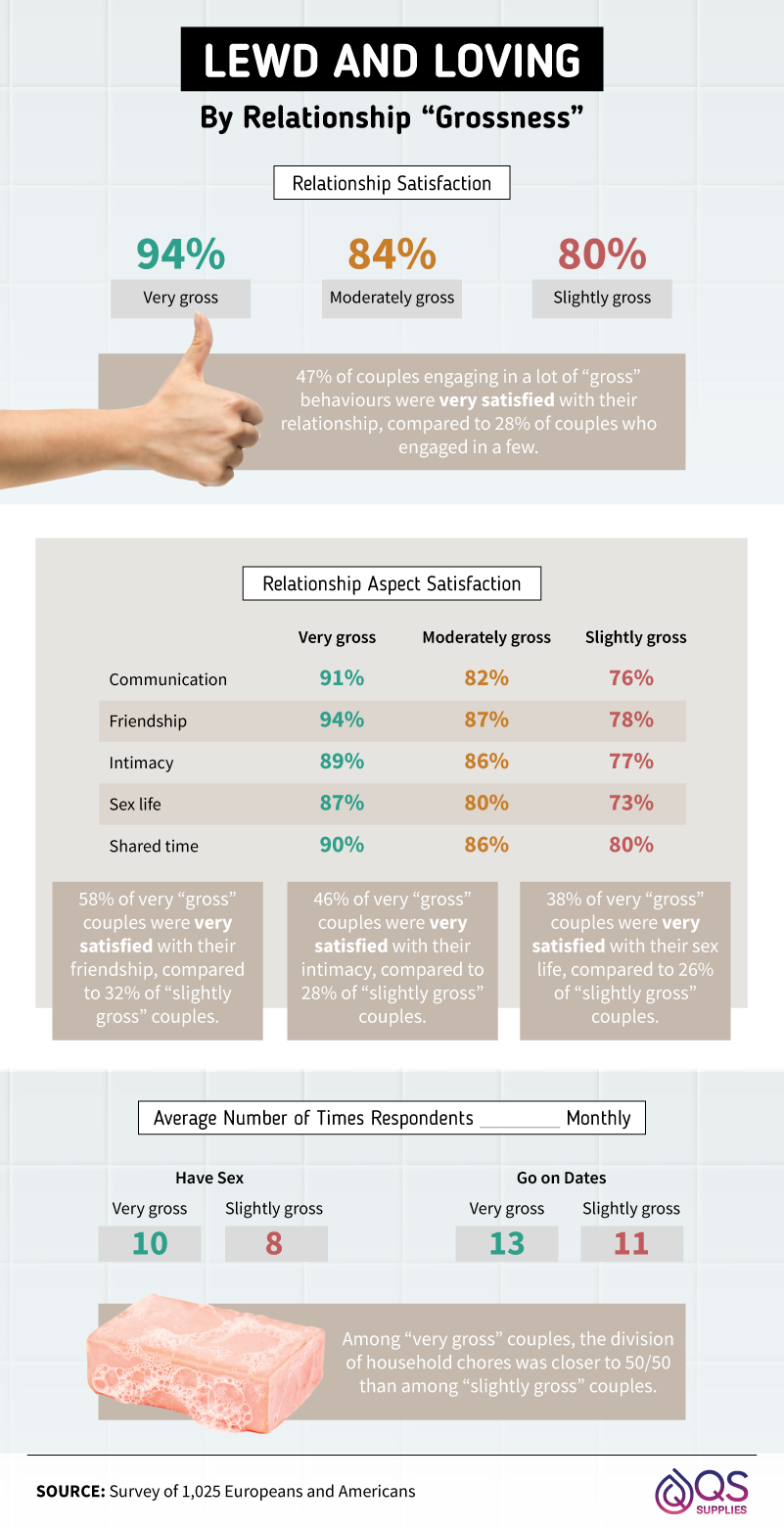 In fact, among respondents who reported a high number of "gross" behaviours, 94% said they were satisfied with their relationship, and 47% described themselves as "very satisfied." Those who engaged in relatively few "gross" behaviours were significantly less likely to express satisfaction overall and in several specific areas.

Interestingly, the largest satisfaction gaps emerged around communication and friendship. The causal relationship here is unclear but interesting to consider. Seen one way, these results might suggest that an open approach to "gross" habits can help improve one's relationship. Conversely, these findings could also indicate that couples with strong friendships and good communication habits are more comfortable performing "gross" grooming acts.

Significant satisfaction gaps were also clear in the areas of sex and shared time, with "very gross" couples reporting considerably more satisfaction in these areas. In keeping with this result, "very gross" couples had more sex and went on more dates. These findings indicate that no grooming habit can extinguish healthy romance: If you nourish emotional commitment, you can get through the moments that might set other couples back.

Couples don't get comfortable overnight: Dating is a period of developing trust and intimacy. And for many people in the initial stages of dating, deciding when to reveal "gross" behaviours can be a quandary. How long must you be on your best behaviour? Which behaviours might be tolerated in a long-term relationship but seem unacceptable when they take place on a first date?

Among the single people surveyed, a minority felt comfortable defaecating while spending time with a new love interest, either in their own home or at their new partner's place. Just a fifth said they'd feel comfortable passing gas with a romantic partner present.

In keeping with these concerns, many reported discomfort in holding their bowels in check. Fifty-seven per cent said they'd held back from defaecating while around a romantic interest, and 38% recalled experiencing pain from holding in gas on a date. Interestingly, women were more likely than men to report these experiences, suggesting that women may feel additional pressure to avoid such faux pas. After all, science shows that women and men pass gas at equal rates.

Is concealing these bodily functions really so necessary in early romantic relationships? In the eyes of many respondents, the answer is a resounding "yes." Sixty-four per cent said that if someone intentionally farted on them during a first date, they would regard it as a deal-breaker. Nearly the same portion said defaecating with the door open would be enough to foreclose any hopes of future romance. Respondents were more forgiving of peeing with the door open, although more than a third also considered this to be deal-breaker territory. In each of these cases, single women were equally likely as single men to find these behaviours unforgivable.

Our findings suggest that many supposedly "gross" bathroom behaviours are actually quite common. Moreover, many people feel closer to their partners once pretences fade and grooming becomes collaborative. Sure, some behaviours are widely viewed as unacceptable: If you ask for your partner to assist in wiping, don't expect their willing cooperation. Generally, however, our data demonstrates that couples have widely differing degrees of comfort about sharing personal hygiene with each other. What some view as revolting, others regard as pragmatic.

In light of the diverse attitudes and habits we've uncovered, communication between partners seems essential to sharing the bathroom successfully. It's unwise to simply assume that you're on the same page, lest you unwittingly annoy or offend someone you love. Even if you've cohabitated for some time already, a frank conversation could clarify your respective preferences – and spare your relationship unnecessary resentment.

No matter how you choose to share your bathroom, you deserve to do so in a beautiful setting. QS Supplies offers an amazing selection of bathroom fittings, including bathroom vanity, shower enclosures, bathroom furniture, and accessories, all at unmatched prices. We ship directly to your door, saving you the hassle and expense of arranging transportation. From elegant baths and basins to showers, mirrors and more, we have all the products you need to make your bathroom look its best.

To help ensure that respondents took our survey seriously, all respondents were required to identify and correctly answer an attention-check question. In some cases, questions and responses were rephrased for clarity or brevity. These data rely on self-reporting, and statistical testing was not performed on these findings. Potential issues with self-reported data include, but are not limited to, exaggeration, selective memory and attribution errors on the part of respondents.

Are your partner's bathroom habits getting on your nerves? Share this project with them and kick-start a conversation about bathroom boundaries. In fact, you're welcome to share our work for any noncommercial purpose you see fit. When you do, however, please include a link back to this page to attribute our team properly.