Sure, "you cook, I'll clean" or "I'll wash, you dry" are quaint adages to describe how couples or spouses should split household chores, but just because something looks good written on a tea towel doesn't necessarily make it true.

In reality, the distribution of daily domestic tasks can cause serious schisms in relationships whether you've been dating for a few months or living together for years. If you're waiting for an opportunity to present itself naturally, you might be setting your home life up for even more failure. Sometimes, if you really want something done right, you might need to do it yourself.

And if we don't want our partners or spouses messing up the necessities, like folding the laundry or fixing a leaky pipe, what else is off-limits? For a closer look at the way couples create personal space at home, we surveyed over 1,000 Europeans and Americans to get their take on what their partners aren't allowed to use and why. Here's what they had to say.

Every relationship needs boundaries. Whether it's in an effort to protect your physical space or your mental well-being, setting limits on how far into your life someone is allowed to get can help keep healthy relationships from turning sour. Even in romantic relationships, whether you're dating, engaged, or married, experts say boundaries should be non-negotiable.

For some couples, those boundaries include making certain aspects of their home or personal possessions "off-limits" to each other. More than 1 in 3 couples (37%) admitted to having some no-fly zones with their partner, including their phones (46%), computers (42%), and money (30%). Compared to their European counterparts, Americans surveyed were 18 percentage points more likely to have a list of off-limits items or spaces.

Men polled were typically more possessive over their technology, including computers and phones, while women were more inclined to ban partners from touching their money and jewelry. 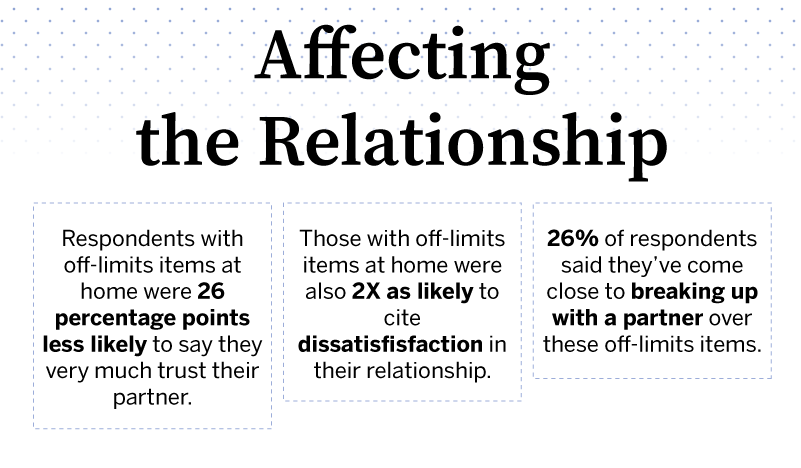 Many couples who acknowledged wanting their partners to steer clear of their possessions weren't worried about things getting lost or broken. Couples with boundaries around things they owned were 26 percentage points less likely to indicate trusting their partner and were twice as likely to be unhappy with the relationship. More than 1 in 4 people with off-limits items had nearly broken up with their partner because of the possessions.

Considering the negative implications of asking someone you live with or love not to touch your things, we asked couples what reasoning they had for making certain possessions off-limits to their romantic companions.

More than half of couples (52%) with a list of off-limits items simply didn't want their partner touching their things, while more than 1 in 3 didn't want their things damaged, and more than 1 in 4 didn't want their possessions broken. One bad experience can make the "what's mine is mine" dynamic escalate even more. Couples were most likely to be possessive of their phones, computers, and money. If something became lost or damaged, couples typically added a "no touching" rule to their clothing. A person's gaming console typically became off-limits if a partner didn't put it back where they found it.

Research shows married mothers typically do nearly twice the amount of work around the house as married fathers do, and the buildup of that (often) invisible work can take a major mental toll. As we found, more than 1 in 5 couples said they've set boundaries around household chores, as well.

More than half of couples set limits around which chores their partners weren't allowed to do because they'd previously messed up performing it, followed by not doing it the preferred (40%) or "correct" way (34%). Of course, once couples enacted a "no touching" policy with housework, they committed themselves to the cause. Eighty percent of people who banned their partner from doing something around the house said they were now solely responsible for that chore. Couples with banned chores were also four times as likely to admit they didn't trust their partners and 10 percentage points less likely to be satisfied in their relationship.

Setting boundaries is an important part of building a healthy, effective relationship, but sometimes those boundaries cross their own line. Many couples indicated they have a hands-off rule where their possessions and household chores were concerned, listing items they didn't want their significant others to touch. Respondents with these restrictions were also more likely to indicate not trusting their partners and being unhappy with them.

At QS Supplies, we never want household tasks to come between you and the person you love. With everything you need to make your space sparkle, including mirrors, basins, shower doors, basin taps, bath mixer taps and bathroom accessories, you'll never have to worry about fighting over who gets to clean up. Create a space you'll enjoy spending time in, no matter the circumstances. Visit us online at QS Supplies to start shopping now.

To gather the data shown in the above study, a total of 1,009 people were surveyed using a combination of Amazon Mechanical Turk and Prolific. Of these people, 489 were Europeans, and 520 were Americans. 544 of the respondents were women, 463 were men, and two identified as neither.

To qualify for this survey, respondents had to be currently in a relationship and living with their partner. All data shown above rely on self-report; there can be issues that come with self-reported data (such as telescoping or exaggeration). To combat these issues, an attention check was used to help ensure only the respondents who were paying full attention were allowed to be included in the end result. An item that is "off-limits" was described to our respondents as "an item that your partner is not allowed to touch/use."

Fair Use of Statement

We believe in setting boundaries too, but not where sharing this study is concerned. We welcome the use of our findings and graphics for any noncommercial use with a link back to this page as credit to our team.