Call it whatever you want – going to the loo, doing No. 2, the call of nature – but the truth is that everyone poops.

In fact, throughout their lifetimes, the average woman will pass 11,757 kilograms (or nearly 26,000 pounds), and the average man will pass 11,030 kilograms of faecal matter. Even if you don't want to talk about it, and even if it doesn't seem particularly polite, defaecating is completely normal.

Of course, the same might not be true for the things we do to pass the time whilst passing poo.

For a closer look at porcelain palace behaviours, we surveyed over 1,000 people (including 516 Britons and 504 Americans). Read on as we flush out how many people text, tweet and more whilst they do their daily business. If you've ever wondered about the most popular bathroom reading genres, we've got the story for you.

From a young age, you're taught how to behave at the kitchen table. You know to chew with your mouth closed, use a napkin to keep from making a mess, keep elbows off the table and take your plate to the sink when you're done. 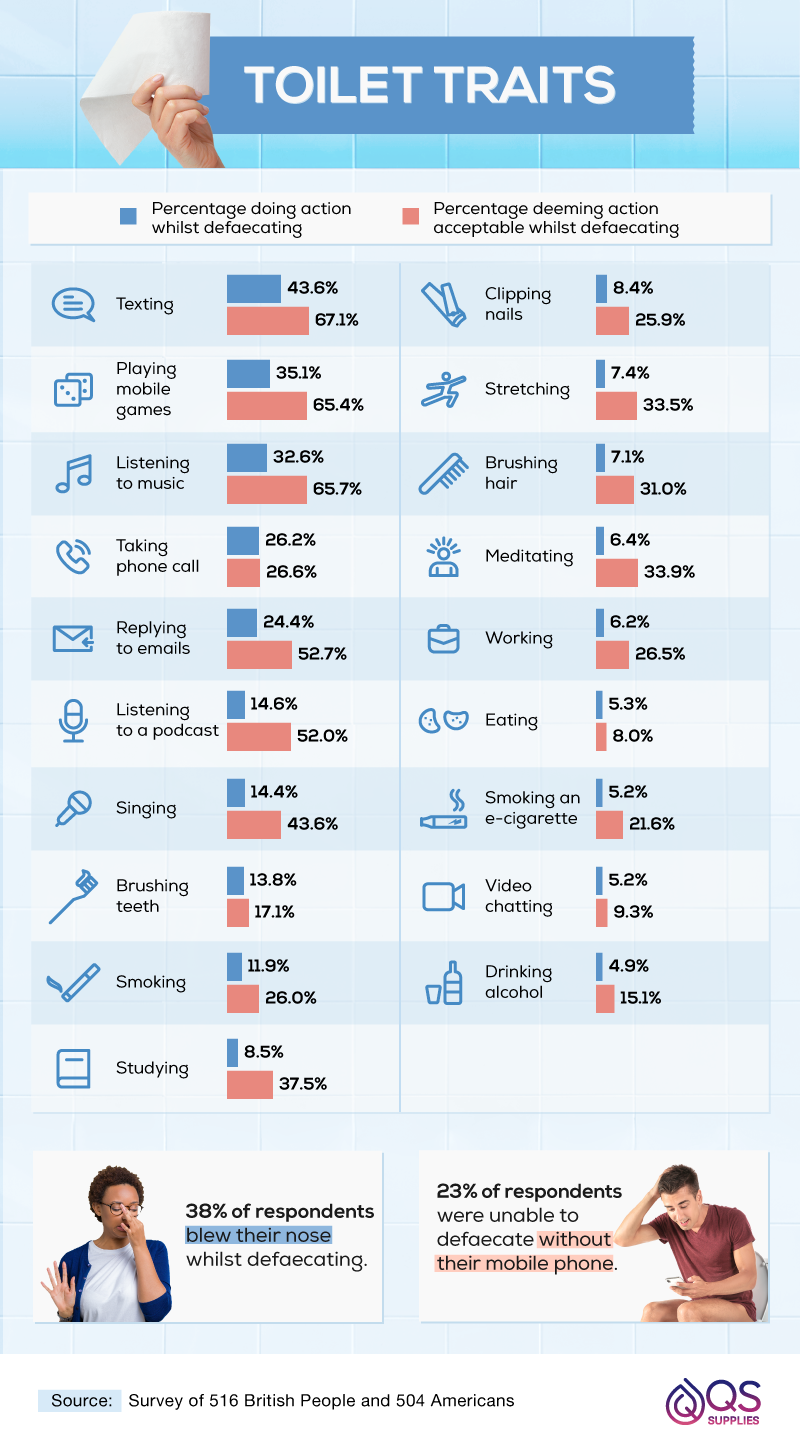 But what about when you're on the toilet? When asked which activities were considered acceptable whilst pooping, responses included texting (67%), listening to music (nearly 66%), playing mobile games (over 65%) and replying to emails (about 53%).

In case you've ever wondered if someone has conversed with you whilst passing a bowel movement, almost 44% of people admitted to texting during a poo, followed by making a phone call (26%), replying to emails (around 24%) and video chatting (5%).

Perhaps because it doesn't make much sense whilst passing the old food, the least acceptable bathroom behaviour was eating, according to 92% of those surveyed.

The bathroom is typically meant to be a private place, but some people might be more willing to share their more intimate experiences in the lavatory than others.

Seven per cent of respondents admitted to sending someone a picture of their poop, and 5% sent a nude whilst seated on the loo.

We've already established how much excrement you're likely to pass throughout your lifetime, but you should also consider the amount of time you spend sitting on the toilet. 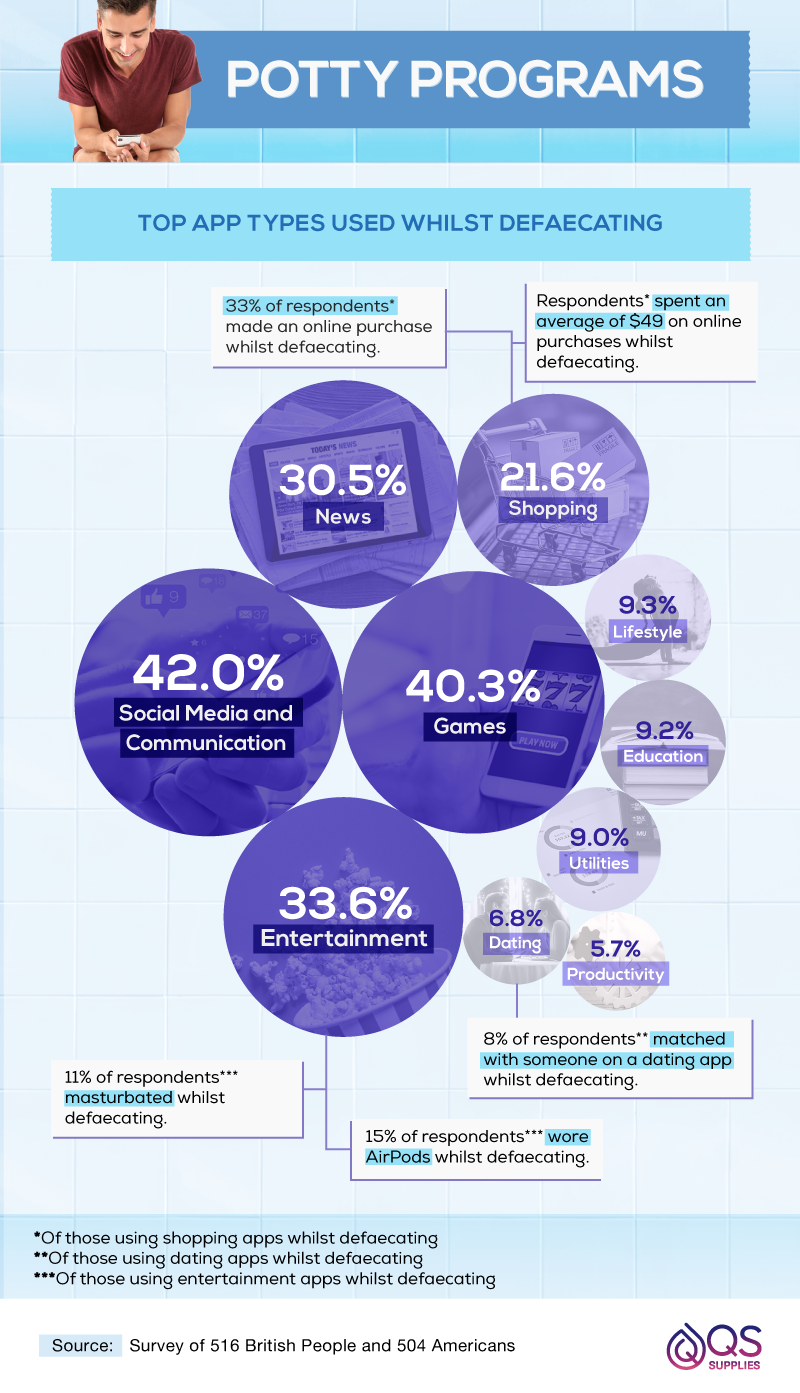 By some estimates, you're likely to spend nearly two hours every week using the facilities, which adds up to 92 days over the course of your life, on average. That's a lot of wasted time – or is it?

If you're interested in multitasking, here are a few of the most common apps people used whilst going No. 2: social networking (42%), games (40%), other entertainment (nearly 34%) and catching up on the news (about 31%).

With social media, almost nothing is private. Log on to any one of your favourite apps, and you're likely to be bombarded with what friends, family, co-workers and acquaintances are doing.

But have you ever stopped to consider what they might have been doing whilst composing that tweet or Facebook status? We'll give you a hint: It may have involved pooping.

Pooping and scrolling on social media were more popular among younger respondents, including nearly 69% of Gen Zers and about 54% of millennials, compared to 31% of Gen Xers and around 20% of baby boomers.

And whilst Facebook (45%) and Instagram (35%) were the top commode companions, people watching video content, including TikTok (nearly 12 minutes) and YouTube (over seven minutes), spent the most time multitasking on the toilet. With nearly 13 minutes, on average, Gen Zers spent the most time pooping and using TikTok simultaneously.

You might wonder how people occupied their time on the loo before smartphones and social media. Whilst the possibilities are endless, more than half of respondents spent at least some time reading whilst pooping. 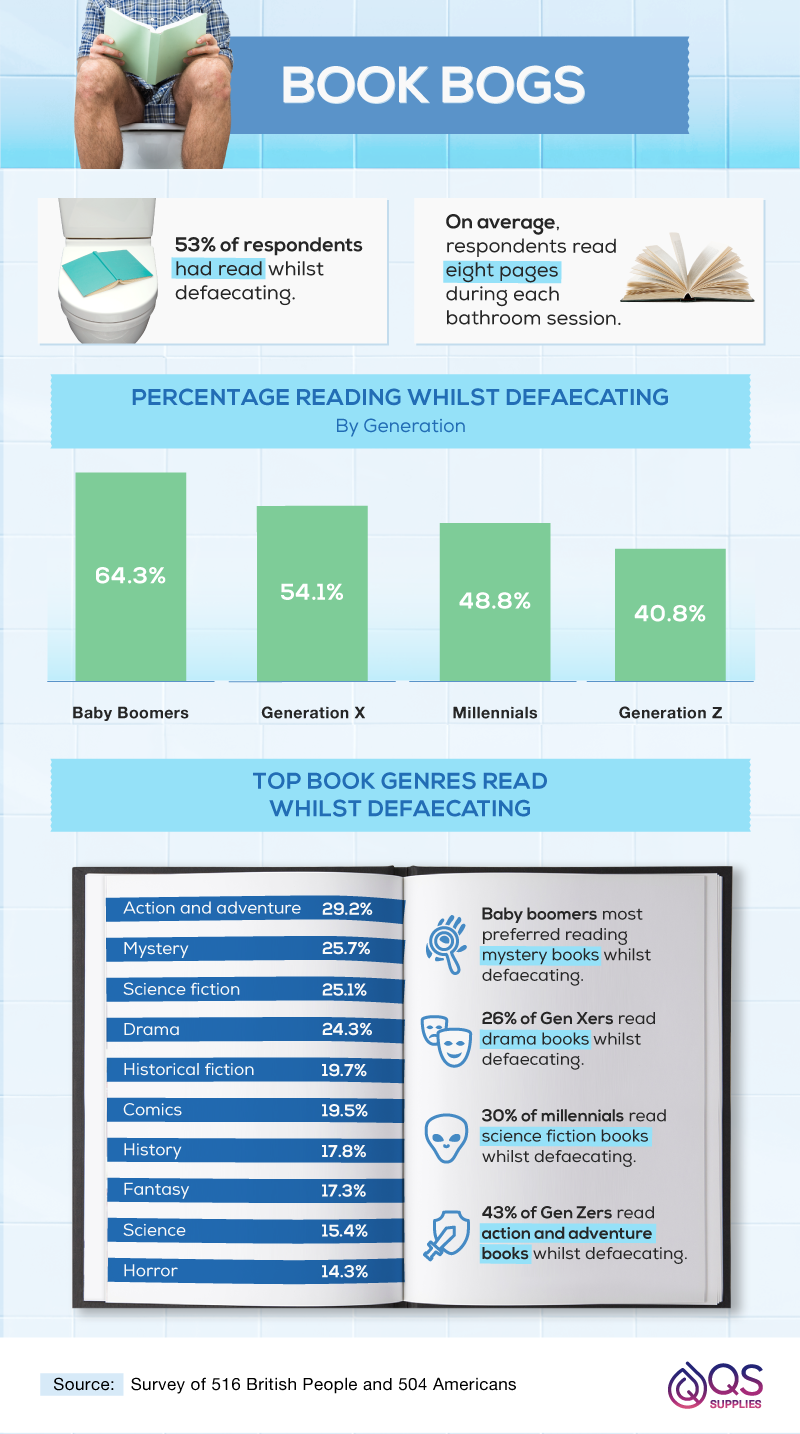 Although more common among older generations, including 64% of baby boomers and 54% of Gen Xers, the most common book genres read whilst taking a poo included action and adventure (29%), mystery (nearly 26%) and science fiction (25%).

Perhaps because the scene in the water closet can already be frightening enough, fewer people preferred reading horror stories (14%) and science books (over 15%).

In the privacy of their homes, people are willing to get creative with the time they have to poop. Online shopping, reading, dating apps and a good mystery novel are just a few ways people entertain themselves on the loo, even if they won't make a dedicated social media post saying so.

Pooping in public is an entirely different story, however. Even though everyone (yes, everyone) poops, 69% had made an effort to hide the noises they made whilst doing so. Including turning on the sink (47%), coughing (nearly 35%), putting toilet paper on the inside of the bowl (26%) and playing music (about 24%), people were willing to get creative to keep other people from hearing their bowel movements.

Beware, though: If you use your phone to help mask bathroom sounds, you might end up paying an even higher price. More than 1 in 5 people confessed to dropping their phone in the toilet at least once. Considering the germs in question, we can only hope they washed them thoroughly after the fact.

Making the Most of It

If you're a healthy human, you're going to spend some time pooping this week. You may even have some go-to ways to pass the time, including texting, perusing social media and watching the latest TikTok videos. And if you're like most people, the way you poo in private isn't exactly the way you poo in a public bathroom – where you might be more conscious of the noises coming from your stall.

But when you're at home, you might as well make the most of every trip to the loo. At QS Supplies, we're passionate about making the best bathrooms. From basins and baths to back-to-wall toilets, close-coupled toilets and taps, you'll find everything you need to make your trips to the washroom as comfortable as possible. See them for yourself by visiting us at QSSupplies.co.uk today. You can even do it from the toilet seat if you want.

We collected 1,020 responses from 516 Britons and 504 Americans via Clickworker and Amazon's Mechanical Turk. Of the 1,020 respondents polled, 47.1% were male, 52.5% were female and 0.5% were nonbinary. Participants ranged in age from 16 to 74, with an average age of 39 and a standard deviation of 15. Twelve per cent of respondents belonged to Generation Z, 40% were millennials, 24.1% were Gen Xers and the remaining 23.6% were part of the baby boomer generation.

We employed an attention-check question to swiftly identify and disqualify those who failed to read questions in their entirety. As with any survey, the main limitation of this data is self-reporting. Self-reported data are faced with issues such as attribution, exaggeration, telescoping and recency bias. The lowest sampling for social media platforms was for TikTok at 45 respondents; all other platforms achieved a sample size of 135 or above.

We're all friends here, so there's nothing to be embarrassed about. If you want to share our story for any noncommercial use, just make sure to include a link back to this page to acknowledge the team of contributors who made this poo study possible.