Revealing the curious tactics we use to dodge germs 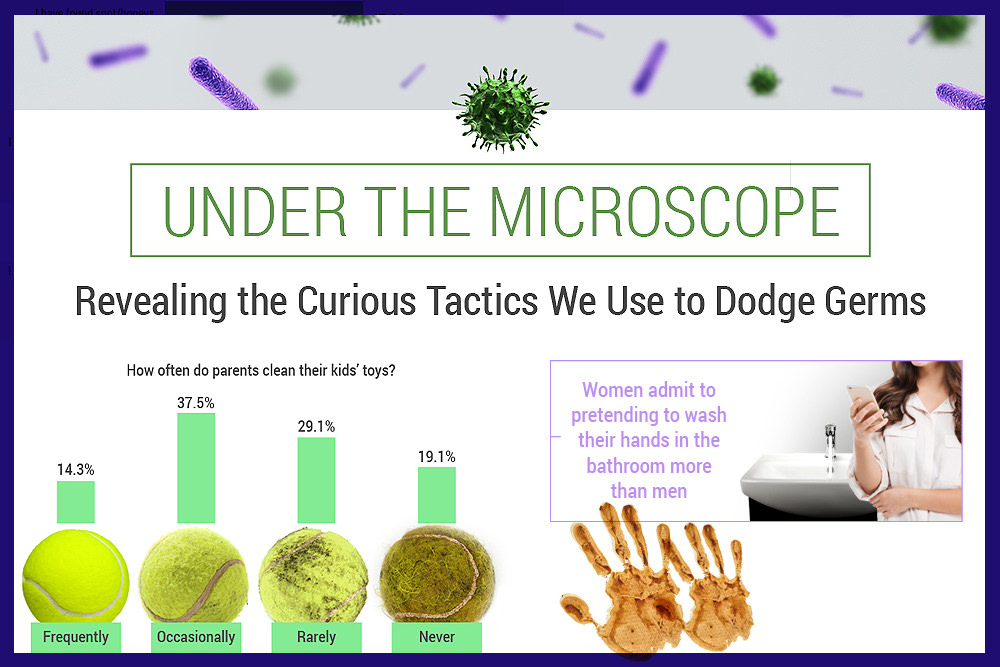 Germs are everywhere, and there's no escaping them. But does that mean we should surrender and accept contact with a never-ending germ army? Or do we fight the good fight and engage in as many germ-dodging tactics as we can? Some people fall firmly into one of these camps but most are somewhere in the middle – picking their battles based on what disgusts them the most.

We spoke to 1,008 Brits to find out who are the germaphobes among us, what tactics we use to avoid germs, who lies about hygiene behaviours, and the ways we expose ourselves to more germs than we realise. 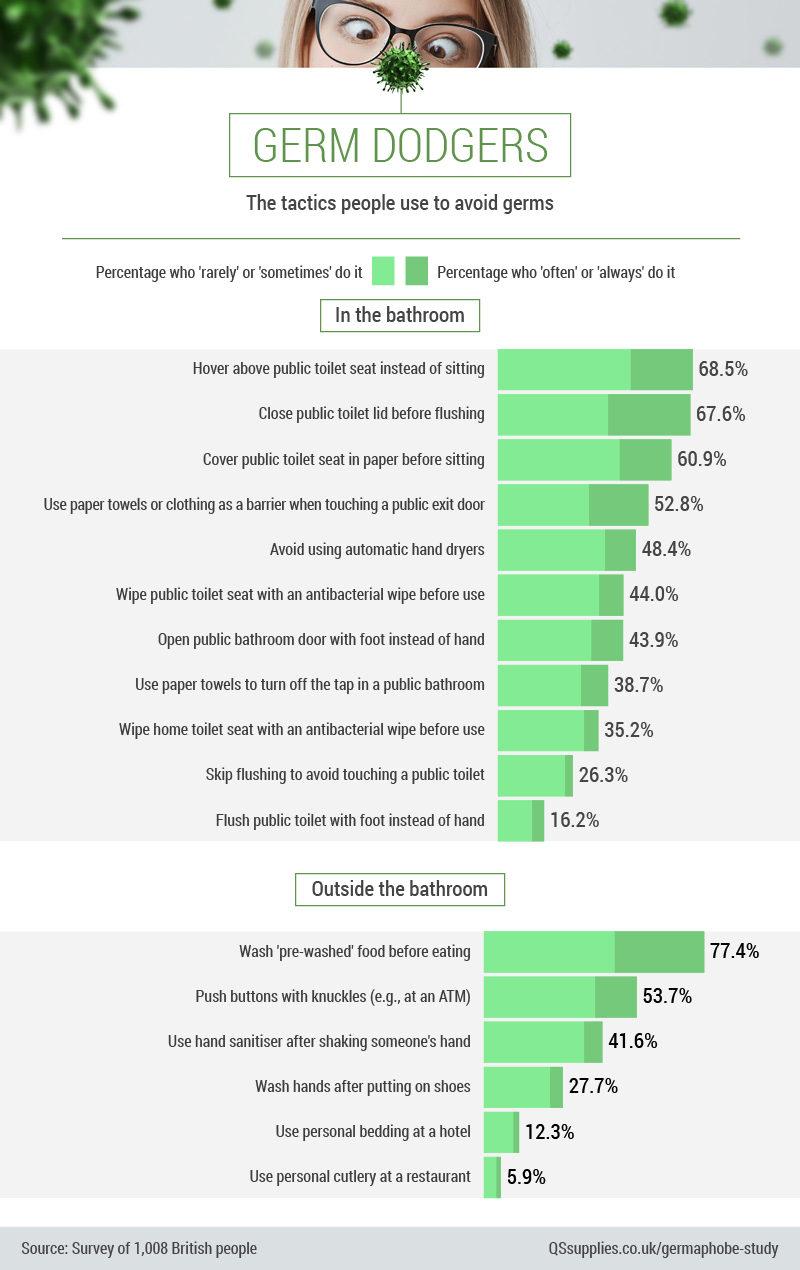 'Just not using toilets, or my main concern, shared toilets because men touch themselves and could pass on diseases.' – 35-year-old woman

The bathroom evokes thoughts of sprawling germs like few other locations, so it's not surprising that germ-dodging behaviour is common here. A popular strategy Brits use to minimise contact with germs in the bathroom is to put paper or clothing between their skin and surfaces. For example, six in 10 cover public toilet seats with toilet paper before getting down to business.

Paper towels also come in handy for almost 4 in 10 Brits who use them to turn off taps and for over half of people who use them (or their clothing) to open the bathroom door.

For some Brits, feet are the weapon of choice in the fight against germs as almost 44% use their feet to open public bathroom doors, while 16.2% use them to flush the toilet, all in a bid to keep their hands germ-free.

The fight continues outside the bathroom. More than three-quarters of us wash food despite it being labelled 'pre-washed', while 27.7% wash our hands after putting on shoes.

For those truly committed to the germ-dodging lifestyle more extreme measures can be taken, like taking your own bedding to a hotel (12.3%) and taking personal cutlery to a restaurant (5.9%). Imagine dining in a restaurant with 16 other people; one person likely brought their own cutlery.

Self-identified germaphobes are 2.5x more likely to take their own bedding to a hotel 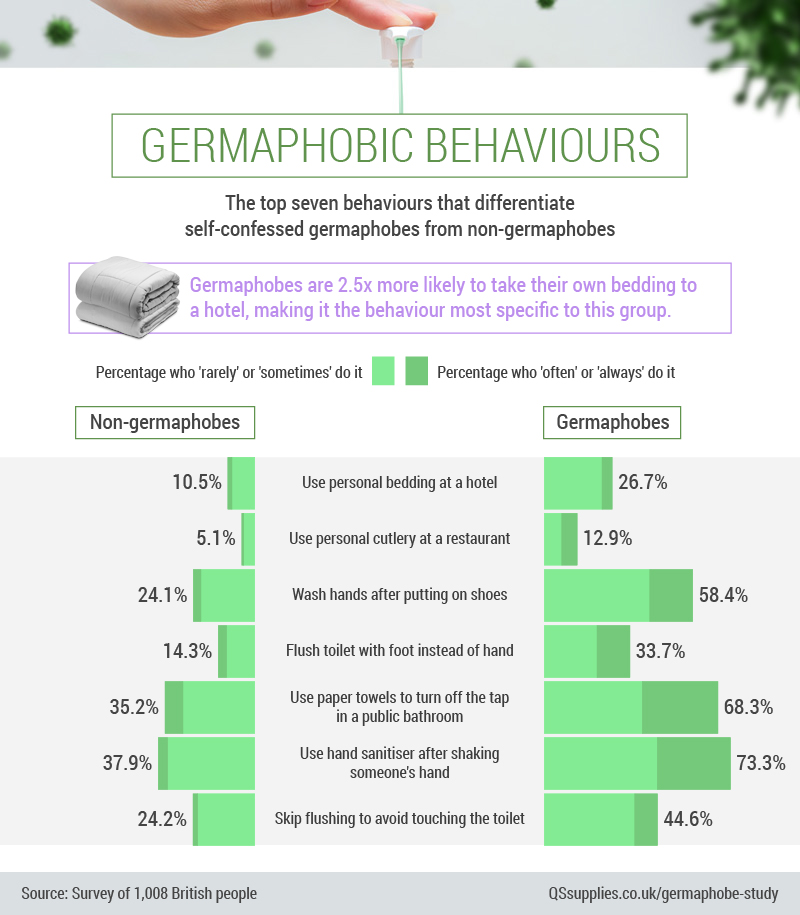 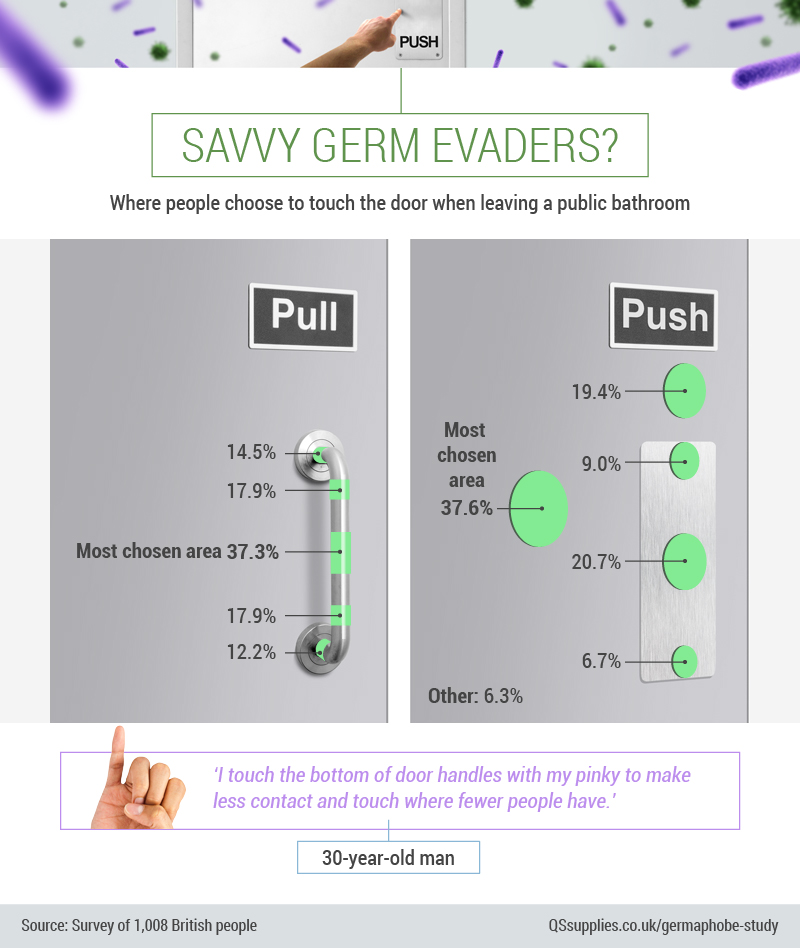 'I touch the bottom of door handles with my pinky to make less contact and touch where fewer people have.' – 30-year-old man

'To open some public bathroom doors I feed my arm through the handle loop to avoid direct contact.' – 20-year-old man


Have you ever noticed the person ahead of you leaving the toilet performing a Cirque du Soleil-esque manoeuvre when opening the door in a bid to make as little contact as possible? Maybe that person is you? We showed people images of push and pull bathroom doors and asked them to point to the area they'd touch to open them. Our results reveal who are the savviest germ dodgers – by touching the door where fewest people do – and who think they're savvy when in fact many others have the same idea.

Pull door
37.3% of people chose to pull the bathroom door open by the handle's centre, the part designed for us to use – meaning the other 62.7% try to be savvy by pulling bathroom doors in ways it wasn't designed to be used. The same amount of people deviate slightly further up or down this part of the handle, with 35.8% of people perfectly divided between these two areas.

The least touched parts of the door were the short horizontal segments that connect to the door, with 14.5% of people choosing this section at the top of the handle and 12.2% selecting the bottom section. When faced with a pull door, the savviest germ dodgers therefore hook or pinch their fingers around the very bottom of the handle.

Only 6.7% and 9% selected the bottom and top of the push plate respectively indicating that these are possibly the best areas of the door to apply pressure if you aren't kicking it open like the Terminator. So if you want to be a savvy germ dodger, join the 6.7% who chose the bottom of the push plate.

Depending on how much time you have to spare the following strategy guarantees the lowest level of germ contact:

'I sometimes wait momentarily on someone beating me to leave a public bathroom so they will open the door for me.' – 29-year-old man 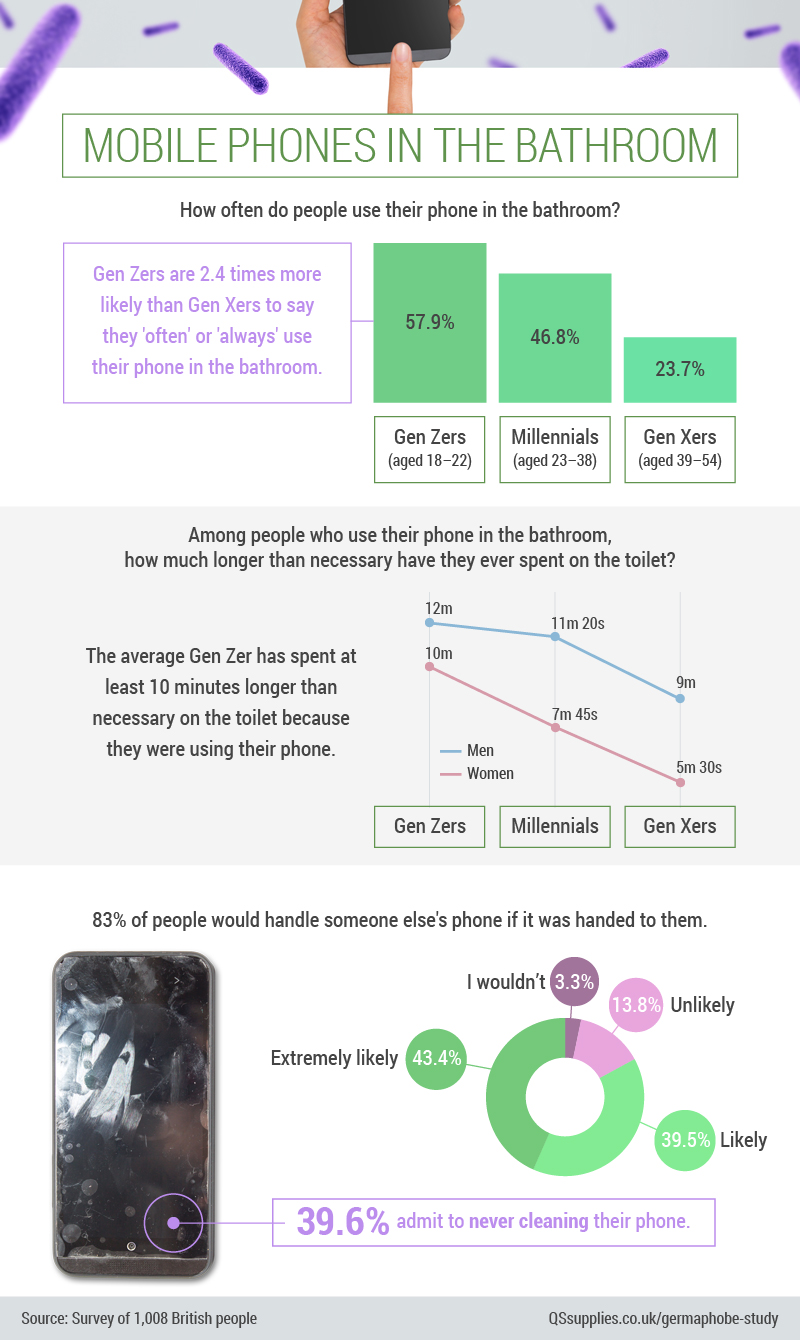 The majority of Brits have a device that they can take with them anywhere and often do: their mobile phones.

The stereotype of younger generations being glued to their phones extends to mobile bathroom habits, as 57.9% of Gen Z adults (aged 18 to 22) very frequently take their phone to the bathroom, compared to 46.8% of millennials (aged 23 to 38) and 23.7% of Gen Xers (aged 39 to 54). Only 4.6% of baby boomers told us they habitually use their phone in the bathroom.

We asked people whether they had ever found themselves spending extra time in the bathroom after doing their business because they were distracted by their mobile phone, and if so, what's the longest amount of time they spent in the bathroom with their phone. The results show that men admit to having spent more extra-time on the toilet than women and that younger adults have had longer periods of distraction than their older counterparts.

On average, male Gen Zers admitted to staying on the toilet for an extra 12 minutes after using the toilet, compared with five and a half minutes for female Gen Xers. Almost 12% of male Gen Zers and 10% of male millennials who take their phone to the bathroom confessed they've spent at least 30 extra minutes in one sitting due to using their mobile phone.

Brits' mobile attachment issues likely contribute to the fact that some mobile phones carry as much as 10 times the amount of bacteria as a toilet seat. A fact made all the more concerning as we found more than 8 in 10 Brits are likely to pick up someone else's phone if they were being shown something on the device – only 3% of people would not touch the phone. Washing your hands after using the toilet can be undone in a second by picking up someone else's germ-ridden phone to glance at something.

How does this compare to people's attitudes towards handshakes? We asked the same Brits what they would do if a friend left the toilet without washing and then reached out for a handshake. Approximately 1 in 10 would shake the hand without giving it a second thought but almost two-thirds of women would avoid the handshake altogether either by refusing (24.1%) or making an excuse to avoid the encounter (40.7%), compared to 12.8% and 29.5%, respectively, for men.

And how often do people clean their mobiles? Roughly 4 in 10 people have never cleaned their mobile phone.

Two in 5 couples have had arguments about hygiene 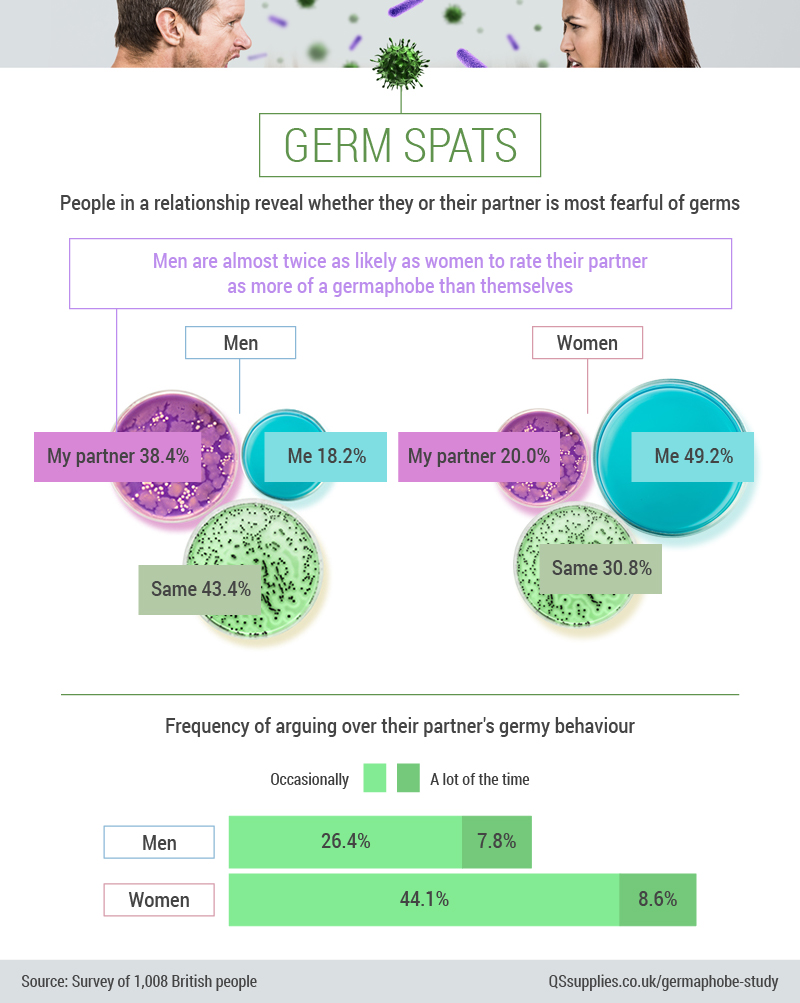 Germ-dodging behaviours are often subtle or occur in the home, so a romantic partner living in the same house is likely the best person to notice these

This difference in attitude towards germs is a source of conflict in relationships as 44.3% said they at least occasionally have arguments with their partner because they do things that potentially expose them to more germs.

Similar numbers of men (7.8%) and women (8.6%) in relationships said they argue about germs 'a lot of the time'. But women were almost 1.7 times more likely to say they 'occasionally' argue with their partner because of germy habits. This begs the question of whether some men are in arguments oblivious to the cause or simply unaware an argument is even happening. 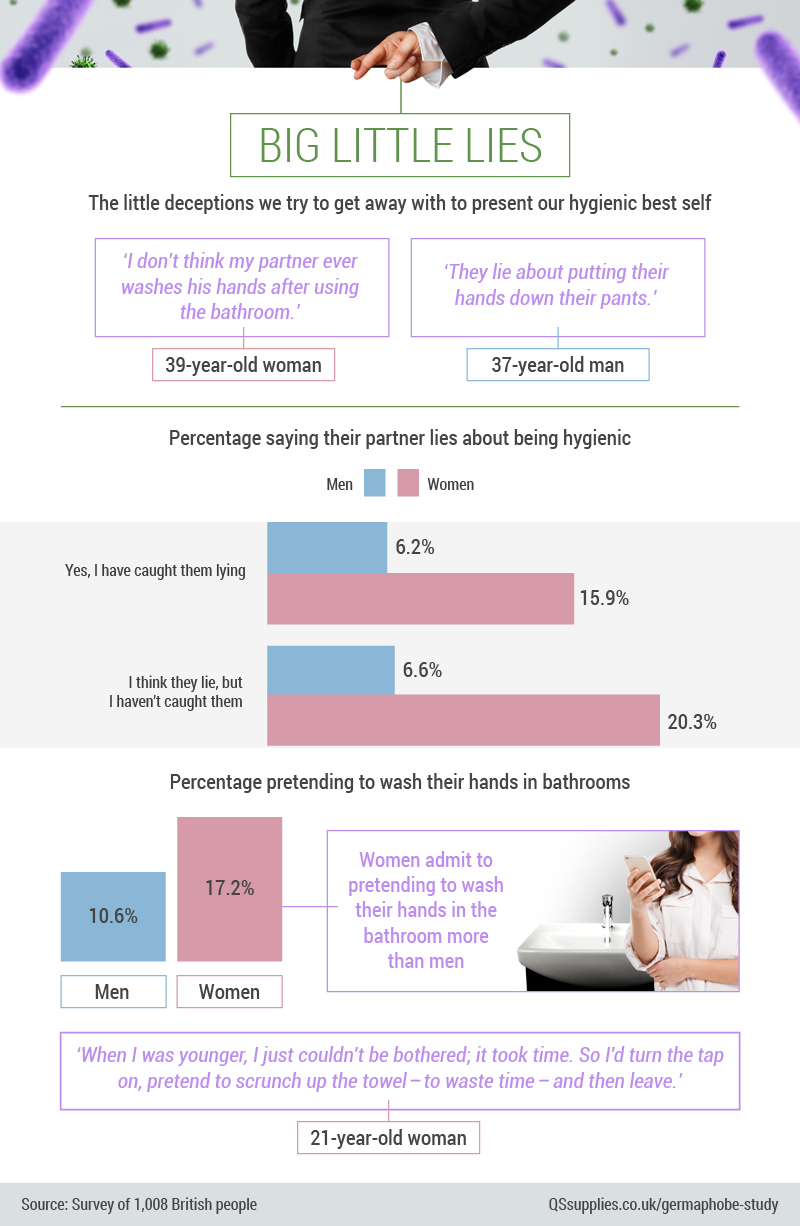 Some people may not think it's necessary to wash their hands after going to the toilet (they're wrong), they may be pressed for time, or maybe they just can't be bothered. Whatever the reason, non-washers may use tactics to keep people from knowing they've skipped their hand washing.

We asked people whether they'd ever pretended to wash their hands either at home or in a public bathroom. The good news is that 86% of people hadn't participated in this deception. Women were more likely to have pretended to wash their hands (e.g., by running the tap or activating the hand dryer without using it), with 17.2% of women and 10.6% of men confessing to the lie.

'When I was younger, I just couldn't be bothered, it took time – so I'd turn the tap on, pretend to scrunch up the towel – to waste time – and then leave.' – 21-year-old woman

We also asked those living with their partner whether their other half lies about their hygiene behaviours. Women were almost three times more likely to either think their partner lies or have caught them lying about being hygienic, e.g., washing their hands. One in 5 women revealed they held suspicions of deception without proof, while roughly 1 in 6 caught them red-handed. 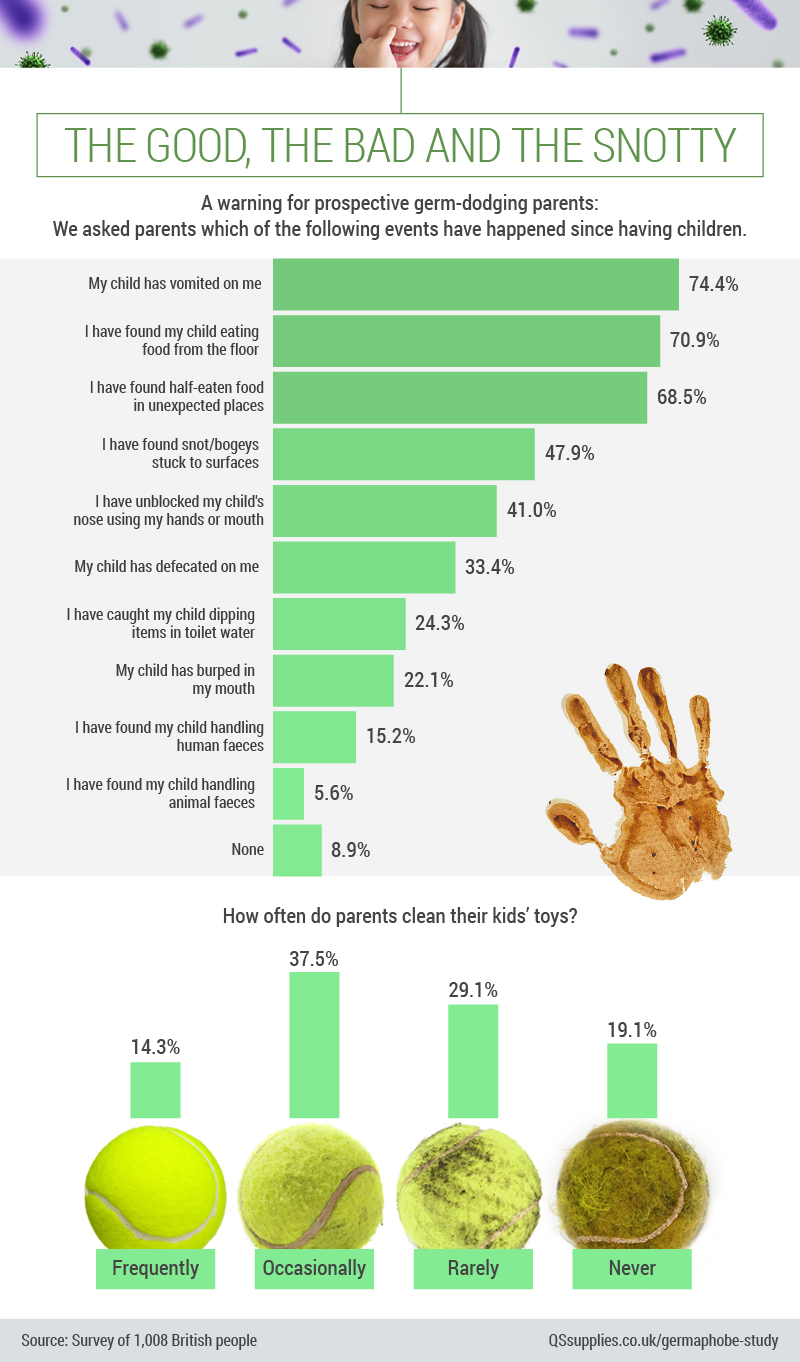 Couples who overcome their germ-related spats may have their sights set on the future and starting a family. Children are adventurous, fearless and not easily grossed out – in other words, they're a breeding ground for germs.

Veteran parents can often be heard telling anecdotes about nauseating things their children have done. It's a necessary part of exploring the world and learning what they should and shouldn't do, and exposure to germs in early life helps to develop a robust immune system.

We asked parents which germy encounters they had experienced since having a child so that prospective parents can prepare for likely situations.

Our results show that a parent can consider themselves lucky if their child hasn't vomited on them, as 3 in 4 parents had that privilege. Just over 7 in 10 parents have discovered their child eating food from the floor, and almost half have found snot plastered on tabletops, walls or furniture. One in 4 parents have caught their child putting their hands in toilet water.

Just under 1 in 10 parents were fortunate to have not experienced any of the 10 germ-ridden encounters we asked about.

While many parents have experienced these encounters at least once, they're mostly rare occurrences and hopefully become less frequent as your child gets older. A more persistent encounter to worry about may be your child bringing germs into the house after spending time playing with other children's toys. We asked parents how often they cleaned/disinfected their children's toys, and almost 1 in 5 said 'never', while another 37.5% said only 'occasionally'.

Whether germaphobe or not, most of us have a germ-dodging quirk or two. Nine out of 10 people claimed not to be a germaphobe but still sometimes flush the toilet with their feet or pack their own bed sheets when staying in a hotel. We saw that most Brits get creative when exiting public bathrooms, but with so many of us trying to outsmart others, we're at risk of outplaying ourselves.

The bathroom produces many germ-dodging tactics but perhaps our guile is misplaced and we should focus on specific items in the home, like our kitchen sponges and mobile phones. Our phones may provide welcome relief from boredom, but they're also a germ storage device with the capacity to undo diligent hand-washing hygiene.

At home, women are much more likely to rate their partners as more germaphobic than themselves and cite hygiene behaviour as a cause of arguments. However, women were significantly more likely to pretend to wash their hands in a public bathroom.

While our results show that many Brits engage in crazy tactics to dodge germs it's worth noting that the very best defence against germs is simple: Wash your hands regularly and properly. Also, maybe give your phone a clean once in a while.

We'd love for you to share our findings and images for noncommercial purposes. All we ask is that you link back to this page to give readers access to the full findings and credit to the QS Supplies research team.

In June of 2019, we surveyed 1,008 British people aged between 18 and 81 about their tactics for avoiding germs and more broadly about germ-related experiences. Men and women were equally represented. The number of respondents who lived with their partner was 574 and 461 had children.