When nature calls, you need to respect the rules of the jungle. But urinals, portable potties, handicapped-accessible stalls, and more all come with their own set of bathroom etiquette.

We surveyed 1,032 people from the United Kingdom and United States to take a peek into their personal public restroom handbooks, from the most commonly-respected courtesies to the weirdest things they had ever come across. Read on to get a glimpse into people's greatest bathroom-related fears and discomforts, how they really feel about using public washrooms for "number two," and what your guests are judging when they use the toilet at your place.

What are the most common bathroom rules, and how many people broke them anyway? Plus, opinions on handicapped-accessible stall best practices.

The most common bathroom rule was to select the most private toilet available and was followed by 82% of men and 69% of women. Next up was checking the rim of the toilet seat, followed by avoiding personal contact with others. Avoiding environmental contact took fourth place, at a significantly lower overall adoption rate than personal contact (59% versus 69%). While a grand majority of respondents were wary of seat-borne germs, it's important to note that the toilet is just one of many sources of germs in washrooms (both public and private) – so don't forget to wash your hands!

One oft-debated bathroom etiquette topic is when to use the handicapped-accessible stall as a nondisabled person. Nearly three-quarters of respondents said it was OK to use if you really needed to go, and 41% said it was acceptable if no other stalls were free. Another 30% gave it the go-ahead in the event of needing extra space, like having to put a handful of shopping bags on the ground.

In terms of bathroom sins, the most frequently committed misdeeds were using the last piece of toilet paper without replacing the roll, flushing a forbidden item, and using up the last paper towel without refilling. Others were only committed by a brazen few: 8% of respondents had soiled the floor or wall without cleaning it up, and another 8% had dropped something into the toilet and left it there.

Choosing a bathroom stall can be both an art and a science. When certain stalls were occupied, where did people feel most comfortable?

Respondents felt increasingly at ease the further they were from an occupied toilet. In a row of five stalls, with a stall on the far end being occupied, nearly 60% of people said they would opt for the stall on the complete opposite end of the row.

When faced with an occupied stall in the middle of the row, interestingly enough, respondents had a very strong bias towards the right hand stall (51%) instead of the left hand stall (6%), even though they were the exact same distance from the occupied toilet.

A Little Too Public?

While most encounters with public bathrooms are totally benign, you never know when you're going to walk in on something strange or feel a little too aware of how "public" the experience really is. 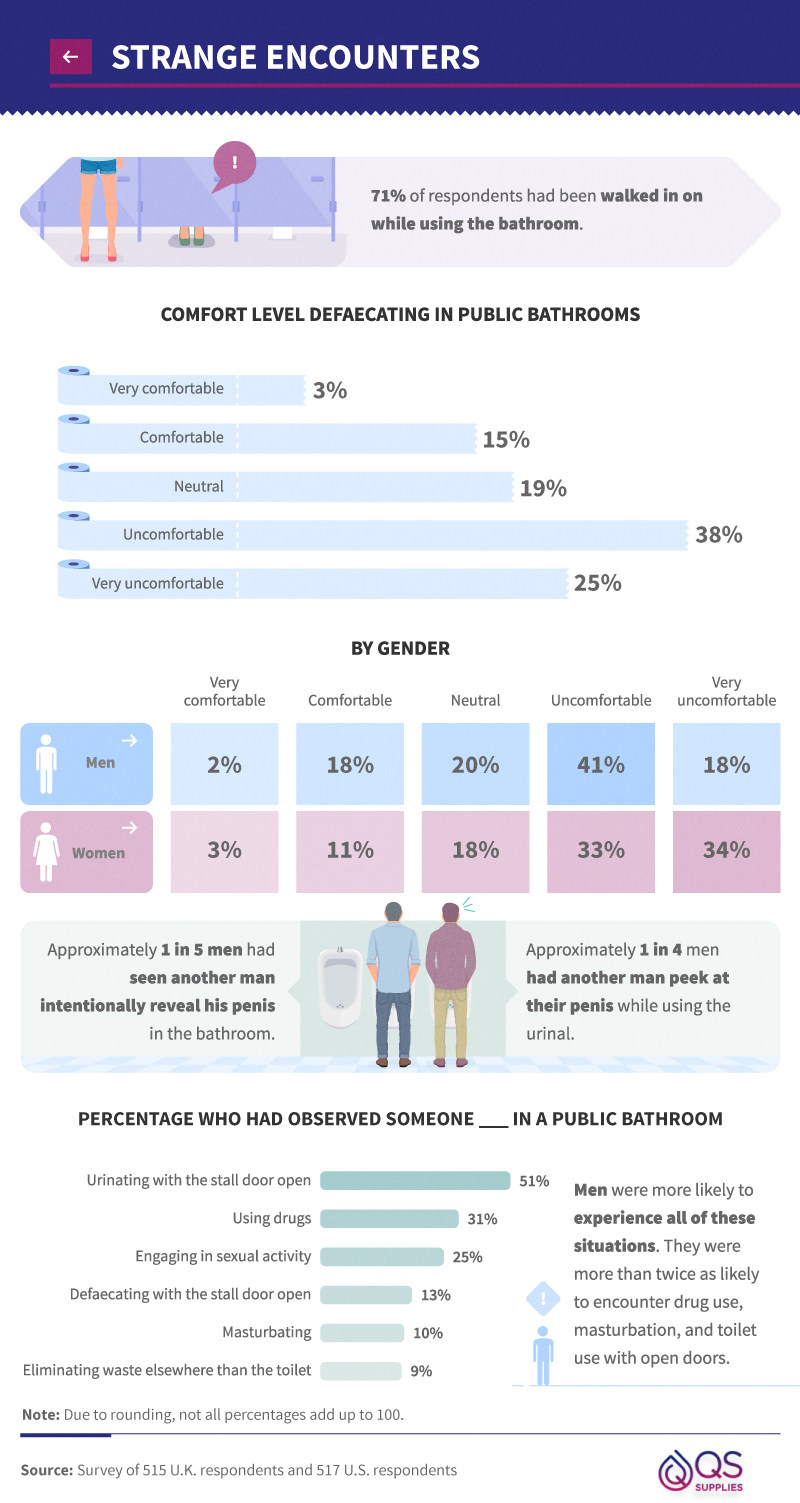 Ever felt shy or bashful while using a public washroom? Believe it or not, toilet anxiety is a thing – a well-documented, scientifically researched thing. Following suit, most of our respondents (38%) said they felt uncomfortable trying to relieve their bowels on a public toilet, compared to 25% who were very uncomfortable, 19% who felt neutral, 15% who were comfortable, and just 3% reporting being very comfortable. On the whole, women were quite a bit more likely to feel stressed out by this scenario.

But freeing your mind enough to defaecate in peace isn't the only interpersonal consideration in a public washroom. Meanwhile, in the men's room, 1 in 5 respondents had seen another man intentionally flash his genitals, and 1 in 4 had seen someone peeking at their package. More than half of both men and women had seen someone peeing with the stall door open, 31% had caught someone using drugs, and 25% had walked in on a sexual romp.

Similarly to our bathroom stall results, the vast majority of respondents would rather use whichever urinal is furthest from an occupied one. In a row of five urinals, with the second and fourth occupied, people demonstrated a similar bias for the right-most spot (61%) compared to the left-most spot (29%) – even though both urinals had equal proximity to a fellow washroom user.

The bathroom at someone else's house isn't exactly public, but some of the same jitters can apply. Here's what respondents did to cover their tracks and what made them feel a little judgy themselves. Even if the house you're visiting belongs to your very best friend, it can feel a little awkward using their washroom. So, how do we feel about answering nature's call when visiting someone else?

Just one-third of respondents were okay with urinating audibly, and 11% said they would feel comfortable loudly passing gas. Just 5% weren't bothered about leaving a bad odour behind. Unfortunately for our respondents – who seemed quite sensitive to toilet gaffes – just about half had experienced some kind of embarrassing washroom-related moment while at someone else's house.

To cover up these blush-inducing happenings, 65% sprayed air freshener after defaecating, and 63% took care to clean up any smudges or drips. More than half of respondents also reported knocking before entering the washroom, replacing the toilet paper roll if they used it up, and putting the seat down if they lifted it up. Other best practices when it comes to washroom etiquette include closing the door completely and properly disposing of personal hygiene products.

As much as they were worried about being judged themselves, our respondents also had their moment in the sun: More than three-quarters had judged someone either for having a dirty toilet seat or a generally unclean washroom, and another 71% mentally tut-tutted an unclean toilet boil.

For the majority of our respondents, whether they were in public or at a friend's house, discretion and cleanliness were top priority. Preferences like creating distance between fellow washroom users, minimising sounds and smells, and saving number two's for the at-home toilet were all commonplace. However, as much as they tried to be civil restroom-goers, many respondents had witnessed some kind of transgression inside of a public washroom, from drug use to open-door urination.

In a world where the washroom experience can be somewhat unpredictable, is there anything more satisfying than walking into a clean, well-designed, Zen-inducing one? QS Supplies is your destination for all things washroom, from cisterns, countertop basins, bathroom accessories, vanity units, and taps to bathroom furniture. Visit QS Supplies to create a five-star bathroom experience that will leave you feeling relaxed and refreshed.

All respondents were required to identify and correctly answer an attention-check question. In some cases, questions and responses were rephrased for clarity or brevity. These data rely on self-reporting, and statistical testing was not performed on these findings. Potential issues with self-reported data include, but are not limited to, exaggeration, selective memory, and attribution errors on the part of respondents.

Speaking of etiquette: we kindly ask that you only share this article for noncommercial purposes, and always provide a link back to the original piece when you do share this information.