QS Supplies
Articles
What You Should Know About Plumber's Snakes

Everything You Need To Know About A Plumber's Snake 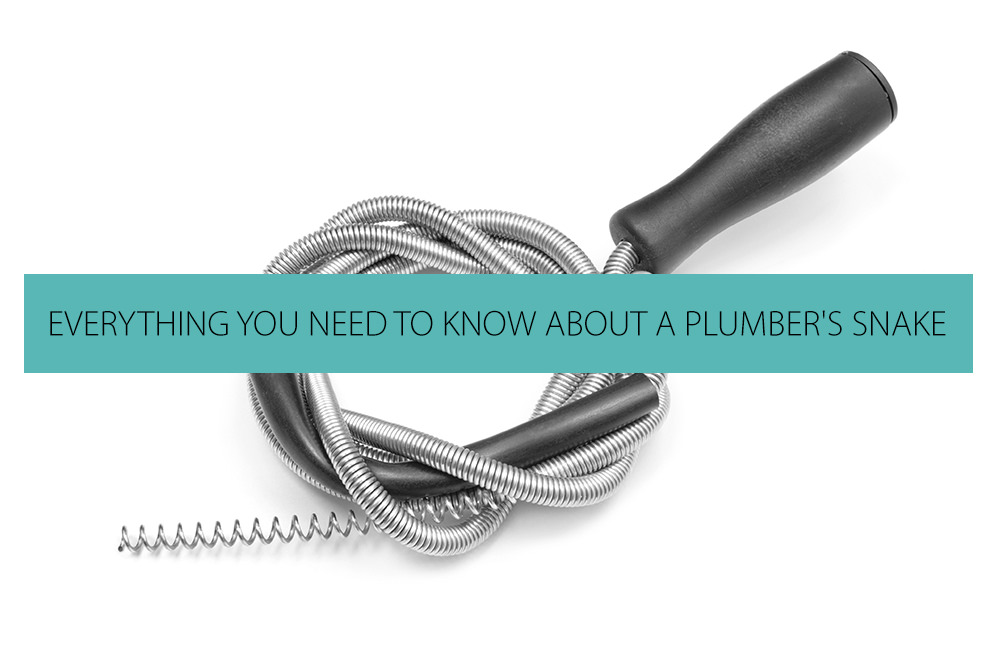 If you've never heard about Plumber's Snakes, keep reading! These are essential tools in any professional plumber's kit, and often, home DIY enthusiasts can use them too. There's nothing worse than clogged drains, for so many reasons – water stains, leaks, warping, pipe damage, and flooding in your home – so sorting them out should be a top priority.

Find out everything you need to know about these devices, including how they work, the different types that are available, and how to use them. You'll soon be a Plumber's Snake expert in your own right, and unblock the clog yourself, or whether you need to know what questions to ask the plumber, you hire.

What is a Plumber's Snake? 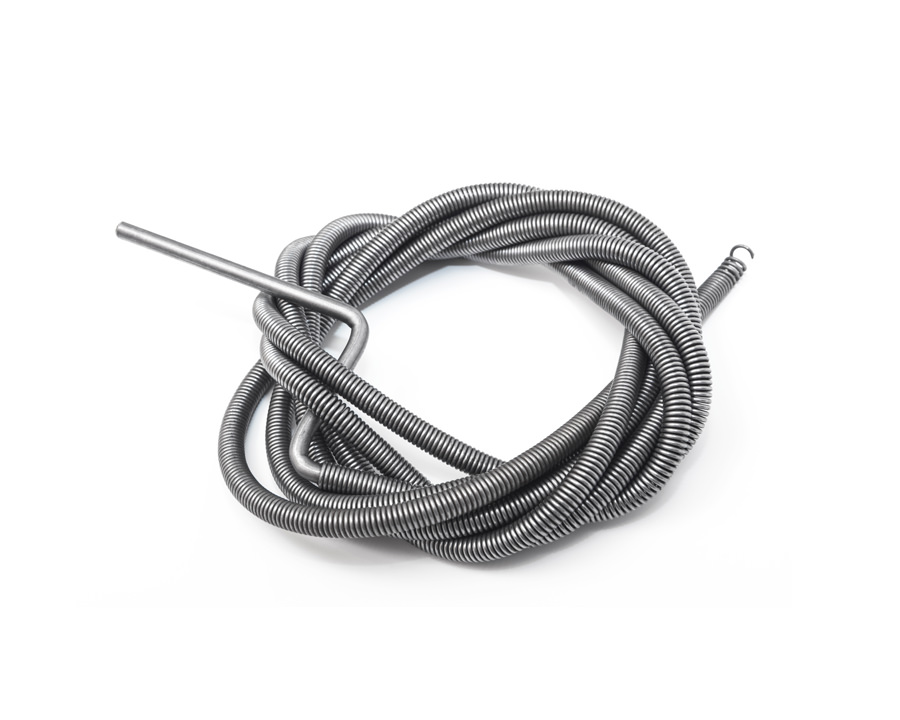 A Plumber's Snake is a flexible auger (drill bit) that is used to dislodge plumbing system clogs. When a plunger is not strong enough to do the trick, a snake is usually used to get the job done.

These 'snakes' are made of a coiled metal wire, with space between the coils, or another form of a drill bit, and attached to a long and very flexible metal cable which in turn is attached to a crank. Professional plumbers or home Do-It-Yourself enthusiasts turn the crank to rotate the auger.

How Does a Plumber's Snake Work? 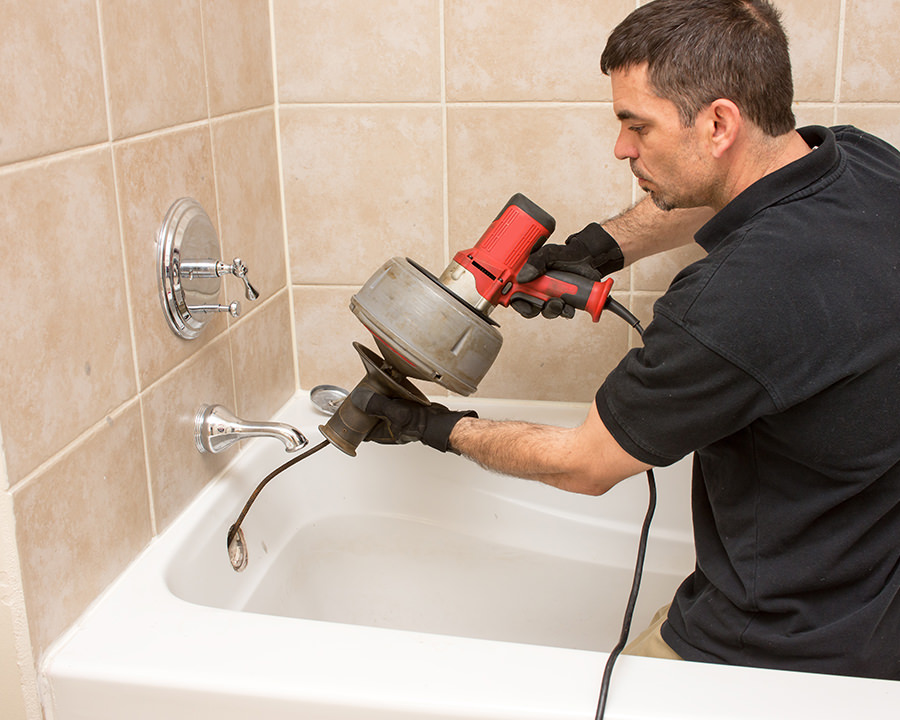 When the auger turns, the corkscrew-like coil is able to dislodge whatever is stuck in your pipe or drain. Whoever is operating the snake, feeds it into the clogged plumbing system by hand, either unrolling it from a reel or unravelling it from its coiled position.

At the same time as they use the crank to turn the auger, the operator can also move the drill bit around inside the pipe - from side to side or in a small circle- and move it up and down. All these techniques work to dislodge whatever is blocking the system.

As the clog starts to become unstuck, the cable will be able to move further into the pipe, and you or your plumber will need to feed more of it into space. Once the clog has come loose, it can move in either direction and be pulled up with the auger or pushed down the drain.

Either way, once the snake and auger are able to move, the pipes need to be flushed out with fresh water. After that, the job is done. Below is the video from Poolarity - Life Hacks which demonstrates how to use a toilet snake properly.

The basic principles and mechanism of a plumbing snake are simple, but there are quite a few varieties out there. Each of them is suitable for different jobs, from unblocking a sink to clearing away tree roots: 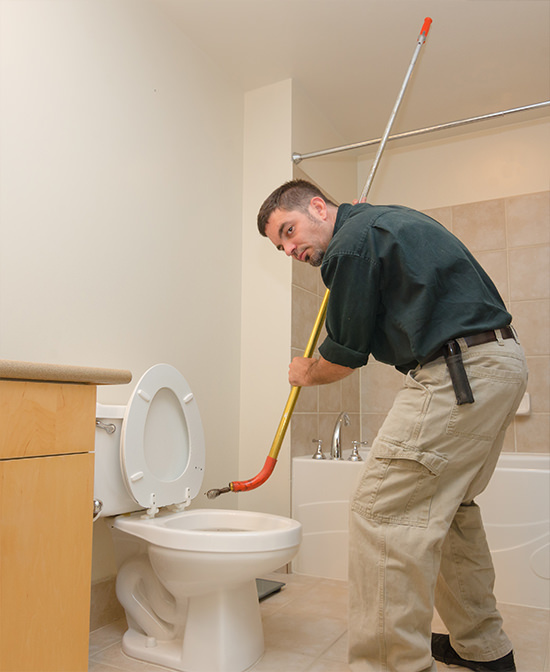 Also known as a Closet Auger, a Toilet Auger is a manual device that is specifically designed to tackled toilet stoppages, if your ever-trusty plunger isn't strong enough or if something small like a makeup item or a toy is stuck.

The bend in the drill bit is designed to fit into the bottom of the toilet bowl so that it can reach further and get to the clog. In toilets, the stoppage is usually at the P-trap (more on that below), and the auger design deals with the pipe bend obstacles – which is why Toilet Augers are better than standard snakes when it comes to these blocks. 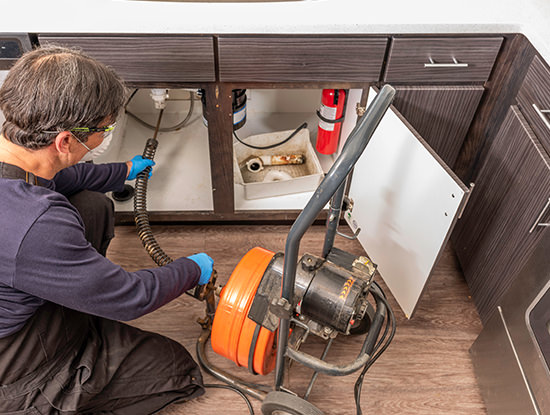 The Drain Snake is the smallest type and may even be used in toilets in a pinch – although the Toilet Auger is much more advisable wherever possible. You might see it called a Top Snake or a Drum Snake, and it's the most common snake in a homeowner's toolkit. Most models have a cable of 25 or 50 feet and a corkscrew tip to snag debris.

Drain snakes can be manual or electric and are used to unstop showers, bathroom basics, washing machines, bathtubs and more rarely, kitchen sinks. In manual models, the cable is coiled into a hollow or bell-shaped drum.

When any kind of Plumber Snake is electric rather than manual, it works almost the way a sewing machine does – it's plugged in and on all the time, but it only works when a pedal is pushed. The cable is wound around a reel and fed out through a small opening.

The operator will need to guide a small section of the cable into the pipe, then lock it into place with a clamp and push the pedal to rotate the reel and move the auger. When the cable moves, they'll need to lift their foot off the pedal, unclamp the cable, feed another length through, re-clamp and repeat. 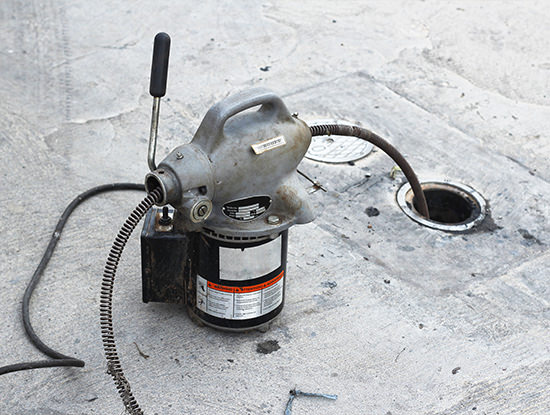 Sewer Augers are professional-standard drum machines. They're used for clearing out drains with diameters of three or four inches, along with sewer lines like the pipes that run from your house and under the street to the metropole sewer mains. If you have tree roots in your system, you'll need a Sewer Auger to get them out.

The cables are either five-eighths or three-quarters of an inch thick and are contained within a large cage. The cables are also at least 100 feet long and are moved with a heavy-duty electric motor. If you call a plumber to your home, they're almost certain to bring a Sewer Auger with them – they won't bother with a Drain Snake at all.

The professional versions are large and expensive, but if you'd like to try your hand at running one yourself, you can rent smaller units. Be aware that operating these machines does take a little practice and give yourself the time you need to get it right before you start unblocking. 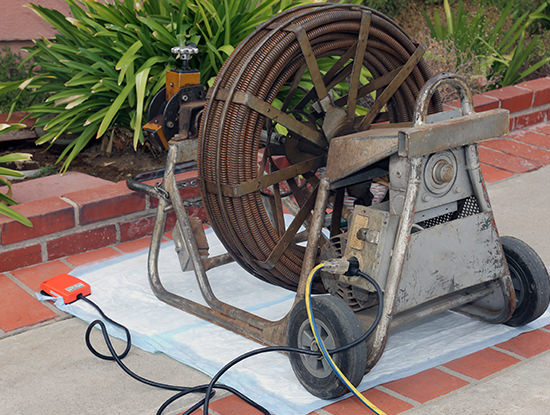 Medium Drain Machines are also known as Mini-Rooters and are a lighter version of the traditional Sewer Augers. The cables are between 50 and 75 feet, with diameters of around three-eights of an inch. The cage and electric motor mounting are the same as in Sewer Augers, and these machines are ideal for long washing machine or kitchen drains or lines.

They also work well if you need to snake a drain after you've removed the P-trap because they're able to maintain their shape over the open area between the two sections of pipe. Don't use them to unclog bathtubs or showers though, because they can damage the trap that runs underneath.

As there are several drill bits available for driving in nails or making holes in your walls, plumbing snakes can be fitted with many different augers.

Different coils are helpful for retrieving lose fragments or lost items, while choppers can clear sand, scale and other debris.

Various blade sizes and lengths can be fitted too, to dislodge stubborn materials that are clinging to the pipe walls and cut through more solidified clogs. As you can imagine, coils are more common in Drain Snakes while choppers are seen more often in Medium Drain Machines and Sewer Augers.

How Much Does a Plumber Charge to Snake? 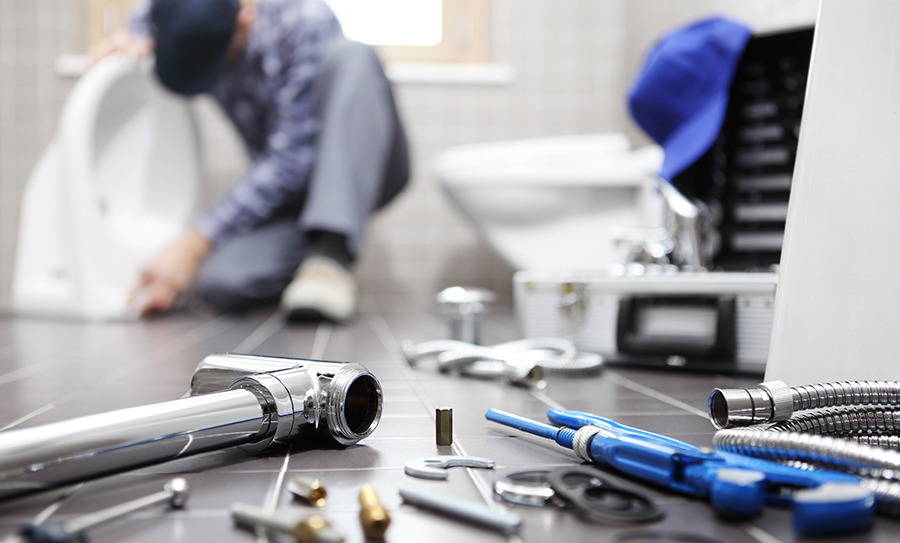 The exact cost of a professional plumber's snaking services will vary according to your area and the exact nature of your project, but you can expect to pay around £80 in total. Don't be tempted to choose someone because they offer a low price; there might be a good reason for that – which could translate into bad news for you

How Do You Get a Snake Past the P-Trap? 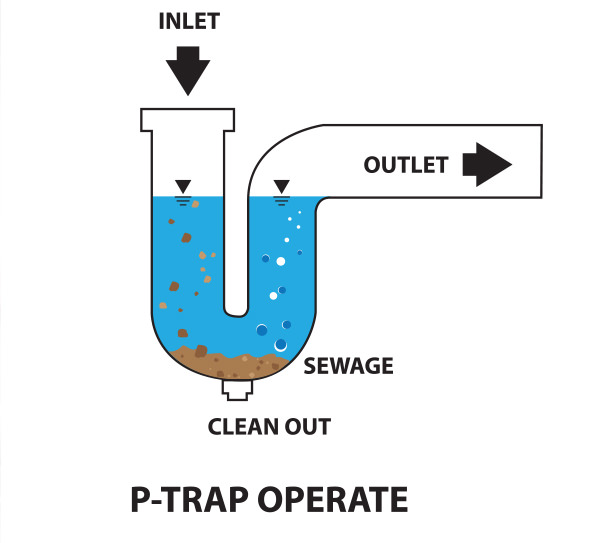 In plumbing, trap refers to any U-shaped section of pipe. The P-trap is a large trap that connects a sink to a sewer system or home septic tank. Under normal conditions, these traps always contain a little water.

The main function of a P-trap is to contain methane and other noxious gases so that they don't enter your home. As such, they're actually a building code requirement. As an added bonus, they're also great for catching small items that fall down drains.

The size of P-traps and their close proximity to sinks' plugholes mean that they're guaranteed to become clogged. As more debris collects, the diameter narrows until it becomes completely stopped up.

In other words, you're going to have to unblock a P-trap or pay someone else to do it, on at least a few occasions in your lifetime. You can keep this to a minimum by using a sink strainer to catch the larger particles that would otherwise be drained into the trap, but you'll never be able to avoid it completely.

Often, it's simpler to remove the P-trap completely and flush it out with water or thread a Plumber's Snake straight through it. If you do this, make sure you put a towel down first to catch anything that leaks out. The trap is quite easy to remove with your hands or an adjustable wrench.

If you are going the snake route, make sure you're using a Toilet Auger and consider running a drain cleaner through first to break up the debris if your pipes are metal. If they're polyvinyl Chloride (PVC), use hot water to do the same thing as the chemicals in the cleaner can damage the material.

Then, rotate the cable as you feed it through the pipe, which will help it to clear corners and make its way through to the trap. Maintain a steady pressure, and if you feel the snake is getting jammed against the wall or corners, apply a little more downward pressure and continue winding the cable. This should provide enough leverage to get the auger moving again.

Be careful to go gently when you do this though; if you push too hard, you could damage your pipes if they're PVC or even your Plumber's Snake.

If, after all this, you're still not having any luck, it's time to call in the professionals and find a good plumbing service near you.