Bathroom Electric Zones in the UK and IP Rating Explained 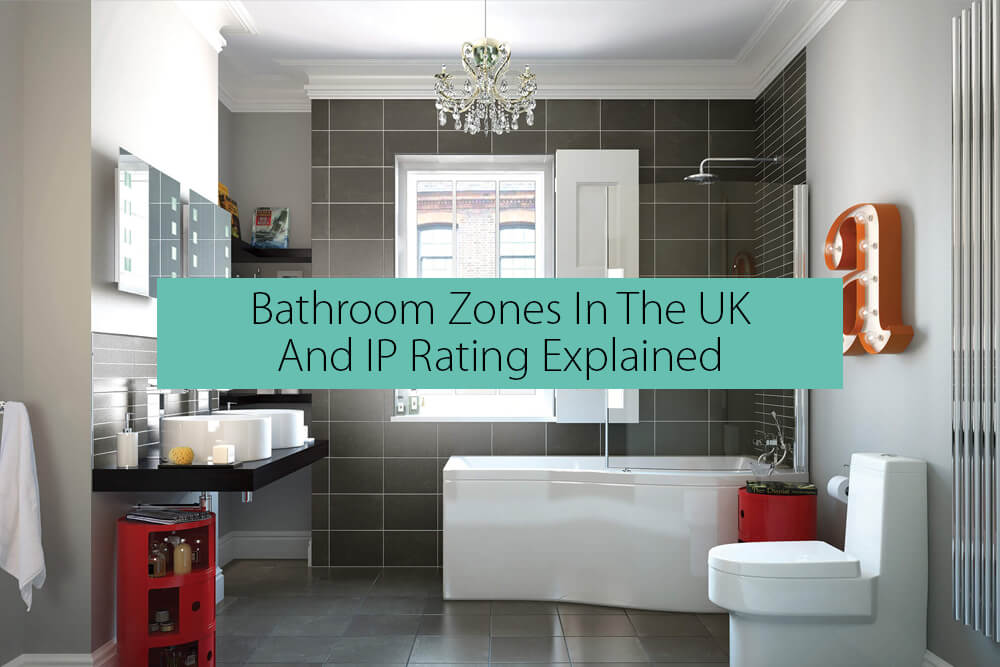 If you’re planning on remodeling your bathroom, you’ll likely encounter a lot of different regulations, rules, ratings, and other ordinances that will dictate a lot of how your bathroom will take shape. Many regulations happen on the manufacturer’s end, with products needing to go through a lot of rigorous testing before they even make it to market. But some things end up impacting your on the design and building end of things as well, which means that you’ll need to have at least a passing understanding of what they are and how they’ll impact you.

One of these things is bathroom zones, and the IP ratings that will dictate the types of lights you can use and where you can use them. Bathroom zones and IP ratings aren’t difficult to understand, but knowing what they are and how they’ll impact your lighting scheme can help you make the most of your new layout.

What Are Bathroom Electric Zones? 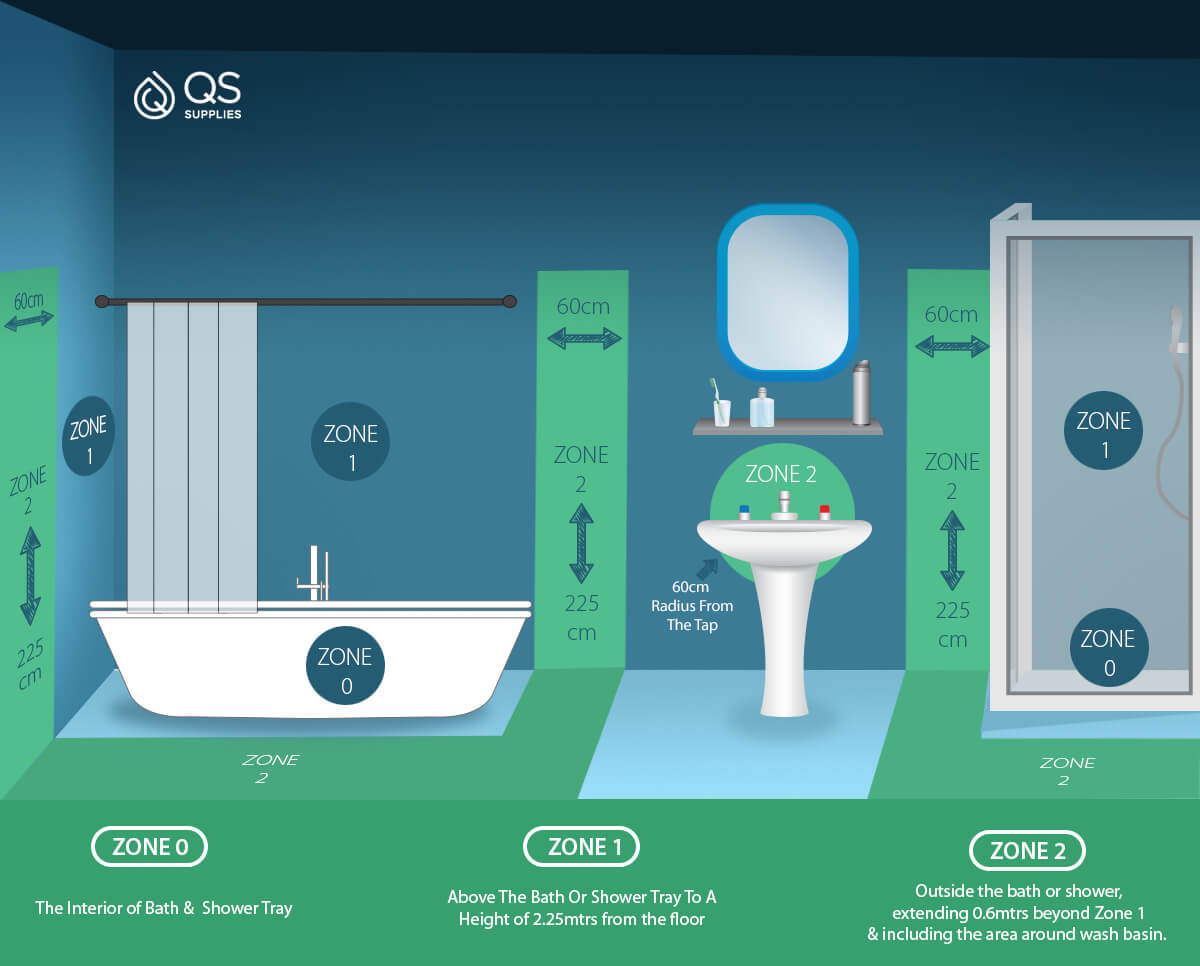 From the standpoint of lighting fixtures and where they can be installed, bathrooms are broken up into 4 zones. Each one refers to a specific place in the bathroom, and explains which light or lights can be installed there.

Zone 0is the area within a bathtub. If you are having a bathtub installed that has chromatherapy lights, for example, this would be an example of a Zone 0 installation, and would require you to have lights for this purpose with an IP rating with a minimum of IPX7.

Zone 1 is the area that is directly above a bathtub or inside a shower stall. If your bathroom lacks natural light and the shower enclosure is in dark place, then the light you would install there would need to conform to IPX4 or greater. This is also true if you wanted to install a fancy chandelier above a roll-top or free-standing bath as well, or any other type of light directly above a source of water.

Zone 2 also needs to have lights that conform to IPX4 or greater. Zone 2 is the area just outside of the shower area. Depending on how large your bathroom is, Zone 2 could encompass the rest of the room, or it may only encompass the area just around the shower, while your sink and toilet areas are in another section entirely.

The rest of your bathroom falls into an area that used to be known as Zone 3, but is currently undesignated. This area doesn’t require an IP rating for any of the lights used, although it’s often recommended that any downlights you might choose have a rating of at least IP44. This is done for two reasons: the first is that this enables the lights to match the others you have installed in the bathroom, giving the room a cohesive appearance. The other reason helps ensure that the lights are well protected from steam. Depending on the size of the bathroom, if steam will make its way out of the shower area, then having IP44 rated lights will ensure that they last the longest amount of time, and you won’t need to worry about corrosion or other issues down the road. 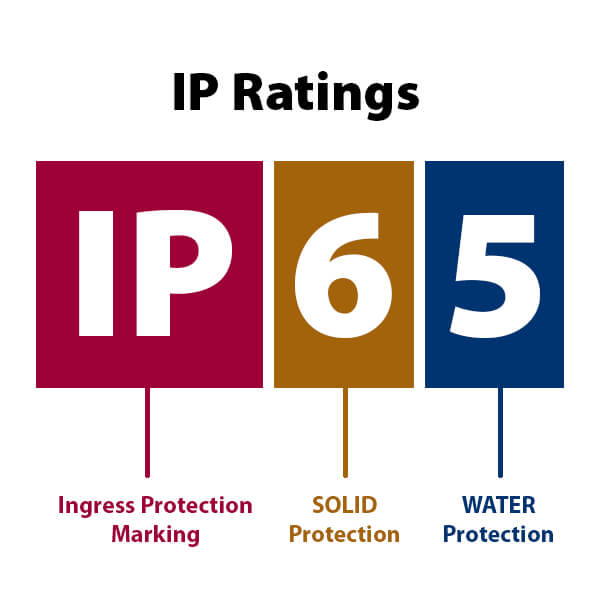 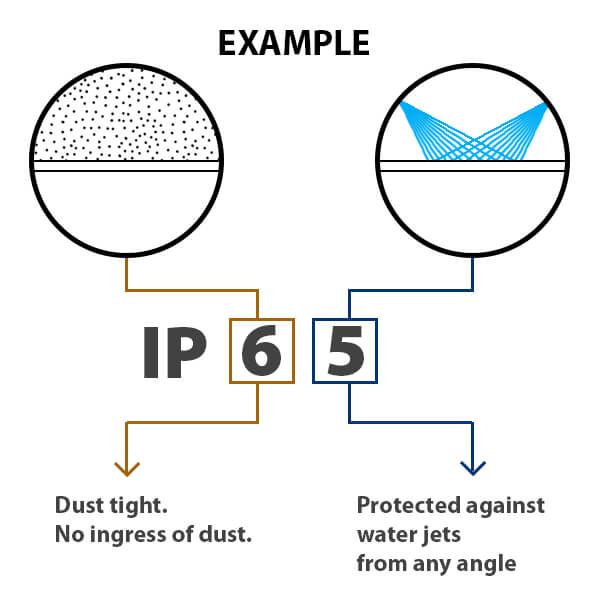 IP ratings are numbers that are given to electronic equipment and lights to show the level of protection they have from their surroundings. For example, lights may need to be protected from the elements outdoors, from splashes of water in a shower enclosure, or from steam. They may also need to be protected from touch, knocks, and bumps, as well as other things could potentially damage the equipment or cause a fire hazard.

IP ratings generally have 2 digits, with the first referring to its protection against solid hazards such as dust the second digit referring to its protection from things like water or steam. In the above minimum ratings of what can be used in various bathroom zones, you’ll see IPX7, which means that the light is able to be fully submerged in water, while IPX4 means that it can handle being splashed.

IP ratings can combine any of these digits, so something rated IP44 would give it protection from thin tools and physical threats and from steam or the occasional splash in the bathroom. If you were installing a light in a swimming pool, you might opt for IPX8, which would allow it to remain submerged at all times. On the other hand, something rated IP65 would give you protection against all forms of dust and a great deal of pressured water. If you had a light in an office environment, for example, where you might have a fire suppression system installed, this type of light would offer you the best protection.

Not all IP ratings are going to be relevant to the bathroom, or to the project you’re undertaking. Some may be necessary for commercial settings, warehouses, office buildings, or outdoor use, so when you’re choosing a light for your bathroom, kitchen, or another area in your home, it’s unlikely that you’ll come across many of these ratings in the light fixtures you’re considering. 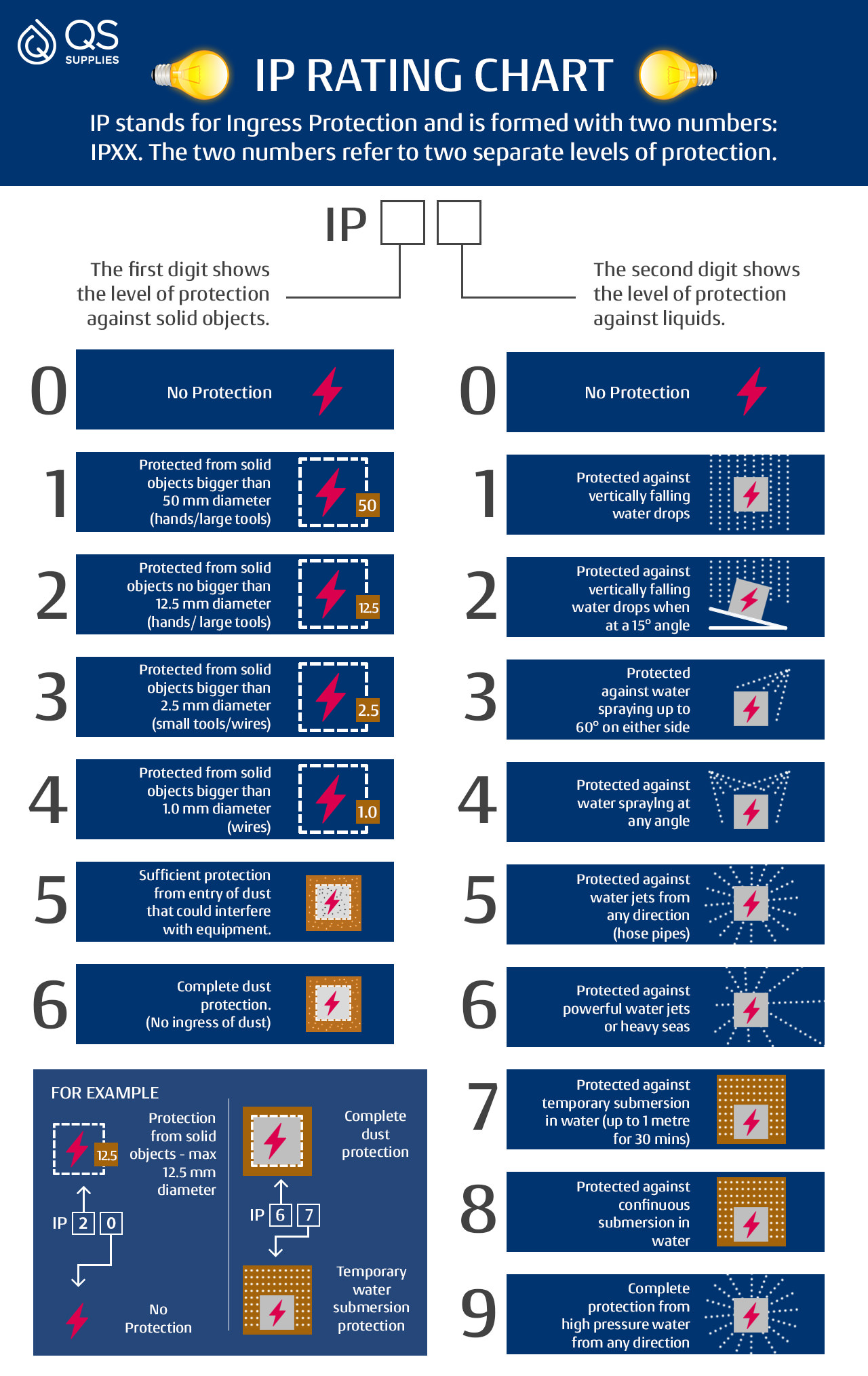 Keep in mind that IP ratings only designate the minimum of what you must install. There’s nothing that says you can’t give a light a higher level of protection, such as installing an IPX8 in a bathtub or an IPX4 above the sink in an area that’s outside of Zone 2. This flexibility will allow you to match lights throughout your home or bathroom, so you can get the illumination you need safely, and have a cohesive, stylish look for all the lights.

When You Need to Be Concerned?

If you’re remodeling your bathroom, it’s likely that you have a designer, general contractor, or at least some competent trades people helping you with the job. One of these should be an electrician who understands what can and cannot be installed in the bathroom. He or she should be able to advise you on what IP ratings to look for when the time comes to choose the lighting fixtures for your new bathroom, as well as the layout of the lighting scheme in general.

Once you know what IP ratings you will need, you’ll have a much easier time choosing the right lights. Keep in mind that you’ll want your new lights to coordinate with one another, and that it’s perfectly alright to use a higher IP than necessary if it allows you to get the look you want. Just don’t attempt to go below the recommended IP rating, as this will mean that your bathroom is no longer meeting safety regulations.